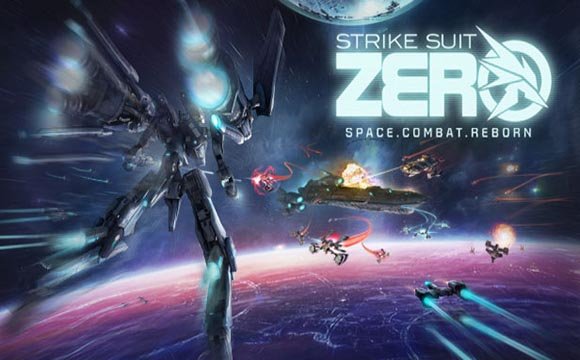 Strike Suit Zero demands three things of its players: the audacity to engage in hectic dogfights in a fighter jet that can often seem as if its constructed of tissue paper, a desire to play pretend pilot to the point of overlooking a handful of significant design flaws . . . and, of course, the strong stomach necessary to withstand the motion sickness of air combat. Those with the gumption (or hard-headedness?) to overcome these hurdles will find a shooter that, despite its many faults, offers a refreshingly old school dose of aerial action.

The major hook in Born Ready Games’ Strike Suit Zero — and the one that keeps it from too closely resembling the space fighter classics it pays homage to — is that the main character is given a jet to pilot that transforms into a anime-style mech. Aside from this novelty, the rest of the game is a fairly standard throwback to PC space combat titles. It also (perhaps in service to the nearly forgotten genre it apes) is incredibly tough.

The first few missions in Strike Suit Zero may make it seem possible to keep up with the barrages of enemy fighters, torpedos and battleships that the game throws at players. They may make the mistake of thinking that they’ve learned the mechanics. This power fantasy quickly vanishes as every subsequent levels amps up the difficulty by leaps and bounds. While a hard game is by no means a bad thing, Strike Suit Zero shifts from enjoyably difficult to downright headache-inducing due to several unfortunate design quirks.

The most egregious of its flaws is a terrible checkpoint system. Once the player has died (and they will) they will often be forced to replay lengthy missions segments that they may have only completed by the skin of their teeth in the first place. This flaw wouldn’t stick out so much if it wasn’t coupled with Strike Suit Zero‘s already repetitive level design. Most of the game’s goals involve escorting allied cruisers through enemy territory or performing strategic strikes against enemy freighters and supply ships. While these objectives wouldn’t become tiring as quickly if each mission only required one playthrough, constantly retrying a task that wasn’t exactly thrilling in the first place takes an enormous toll on the good will Strike Suit builds up in other areas.

A quick save/load option and a ship customization system more complex than the one on hand — fulfilling “side missions” during the game unlocks minor ship upgrades and new weapons — would help a great deal in alleviating Strike Suit‘s hellish difficulty. As it stands, the game is often more aggravating than it’s worth.

It’s a bit of a shame because, aside from its substantial flaws, Strike Suit Zero can be a lot of fun. After getting a handle on how to control the four available ships it becomes thrilling to chase down or evade enemy aircraft, strip the defences from a massive cruiser or launch a barrage of rockets from the Strike Suit. The presentation of the game, levels full of ethereal galactic vistas, looming planets and gorgeous looking spacecraft, is also top notch. These elements work together to make Strike Suit feel like something special — to make the player want to love what’s on offer — even as its execution so often disappoints. A certain type of person may very well be swayed by these positive elements alone.

For me, the sore hands, dizzy head and significantly raised blood pressure that came from playing Strike Suit Zero make me glad to be done with the game. For those masochistic few willing to look past several bad design choices and the inevitable frustration there is a mechanically sound space combat game to be found underneath a good deal of annoyance.

For me, the sore hands, dizzy head and significantly raised blood pressure that came from playing Strike Suit Zero make me glad to be done with the game.
REVIEW SCORE
6
File Under: PC