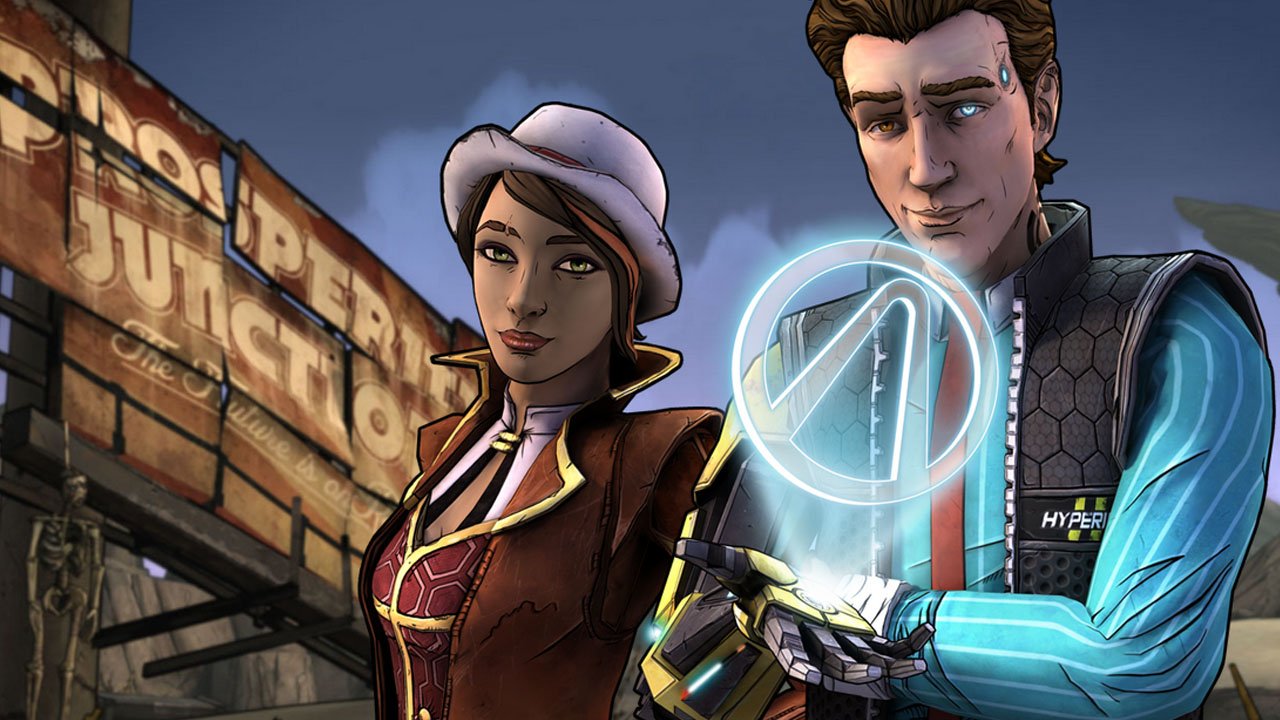 A New Side To Pandora

This was a pretty unexpected alliance, but in the end, it’s a welcome one. Add one part “zany” FPS antics of Borderlands with one part mastery of the episodic adventure games from Telltale and hit the “Frappe” button. End result: Tales From The Borderlands, the first of a five episode series. And, perhaps unsurprisingly considering the run Telltale’s been having, it’s pretty damn good.

First, let’s get the technical stuff out of the way. This is the first time that a new Telltale game has appeared on the PS4, and it is, far and away, a vast performance improvement from its last gen siblings. Where games like The Walking Dead and Wolf Among Us were prone to frame rate hiccups, audio sync issues and loading times that took so long trophy notifications would pop up and disappear before they could even be seen, this new PS4 engine handles like a dream, or at least, like a PC version. Framerates are smooth, usually kicking around 60, although there are some dips here and there, loading is fast, and audio sync issues only crop if you’ve paused the game and return to it. Otherwise, PS4 owners finally get the working, stable, bug free Telltale game they never got on the PS3.

As far as the game goes, like many titles based on licensed properties, you don’t necessarily need to be familiar with the Borderlands world to get caught up in the plot of Zer0 Sum, but it definitely helps. Especially in the in-jokes and references department. The story, told in flashback between two protagonists—both of which are unreliable narrators that embellish for dramatic effect—is all about a con job gone wrong. Rhys is a slick, sleazy Hyperion employee gunning for a promotion and Fiona is a Pandora con-woman looking for that Last Big Score. You can imagine what happens between the two. Troy Baker as Rhys is a last minute replacement for Sam “Crashdown/Starkiller” Witwer, while Laura Bailey takes up the role of Fiona. The chemistry between the two (they both worked together on Infamous: Second Son) makes for a hilarious, comfortable rivalry, and their performances are a big attraction of this first episode.

The main event, however, has to be comedy. People that are recent converts to Telltale thanks to The Walking Dead are probably unaware that the company started with more traditional, comedy point ‘n click adventures such as Sam & Max or Back To The Future. Borderlands has a more pop culture/internet meme-based reputation for funny, but it turns into something a bit more clever and timeless under Telltale’s writers. It’s also impressive to see Telltale embrace all the conventions that Borderlands players have gotten accustomed to; shafts of light rising up from the ground to indicate loot, chest being opened to get new weapon or equipment, even the user interface when Rhys consults his computer has that signature yellow Hyperion style to it.

Tales From The Borderlands is a chance for fans of the franchise to see Pandora in a new light. We’re only at the first of a five episode series, but rather than a bit of a slow burn setting things up, it’s a pretty explosive first episode. Literally. A lot of action occurs for an adventure game, with Telltale’s patented quicktime event system, timed moments of dialog choices, and the more contemporary focus on plot rather than inventory management for puzzle solving. Borderlands fans will love this different approach to Pandora, comedy fans will enjoy the snappy writing, and adventure game fans will finally get another instalment of that most rare of creatures, a science fiction comedy adventure game. It’s light on puzzles compared to the Lucasart/Sierra-Online tradition of the past, but it delivers on all other fronts. This is an impressive start to a new episodic series, and hopefully there will be more than one season in this franchise’s future. A must buy for anyone looking for funny, entertaining, cleverly written science fiction adventures.

Tales From The Borderlands is a chance for fans of the franchise to see Pandora in a new light.