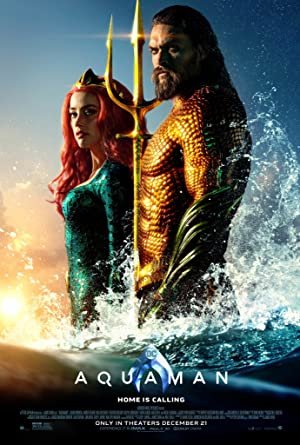 The Atlantis myth has been repurposed countless times (even J.R.R. Tolkien used it as a device in his history of Middle-earth) and it’s easy to see why. It’s mysterious, rife with morality tales on the abuse of power and a breeding ground for intrigue. The technology the Atlanteans held could be anything: whatever is needed to fit the frame of the narrative. For Aquaman all of its might makes quite a spectacle, but in the end signifies nothing.

Aquaman begins with a quote from Jules Verne and immediately its clashing tones are brought to the forefront. This is part saccharine drama, part action flick, as we get a glimpse of both sides of Nicole Kidman’s Atlanna. One minute she’s carrying on learning the value of human tea with her newfound life partner, the next she’s kicking ass in a living room. With the right balance this could have been a really fun land and sea romp, but the film is too at odds with itself to succeed.

We know James Wan can kill it when it comes to action scenes and if you don’t, you will in the first 10 minutes. But in-between those electrifying moments the script just doesn’t hold up. It’s one thing to mouth and predict nearly every one-liner or response: it’s something else entirely when we’re given so much exposition that it borders on insulting. I get that WB and Wan need to sufficiently build up quite a bit of lore here, but they get over two hours to do it and we’ve already seen Aquaman do his thing. It’s kind of like a midway point between an origin story and a sequel: other artists, even in the same space, have succeeded with less.

Its chief weapon, meandering goofiness, is both Aquaman‘s biggest strength and Achilles heel. Momoa is the source of this lovely confusion, affable in nearly every scene he’s in even when he’s boorish. It’s plain to see that he has the right stuff to portray a believable action hero, but he also subtly sports comedic chops to carry us through. When it works it works, when it doesn’t; you’re simply waiting for the next joke that never lands. Instead of using that misdirection to showcase a tortured hero, Aquaman swims on at all costs, if only to move to the next set piece.

While he’s zooming on by as quickly as his sonic boom swimming powers allow, the film loses focus on some of the strongest cast members. I desperately wanted to see more of Yahya Abdul-Mateen II’s Black Manta as Mamoa seems to feed off of his intensity when they’re together (sequel?). Unfortunately Manta is relegated to a side show, as Aquaman is constantly tugging at the struggle between Mamoa and the (typically reliable) Patrick Wilson, a Claudius stand-in.

One of the best scenes in the film, which most people probably won’t even remember after walking out of the theater, involves Manta reverse-engineering Atlantean tech and claiming it as his own. I need more of that and a more nuanced Manta origin story, which would only help Aquaman’s character throughout his entire arc (whatever that may be). As it stands he’s only a plot device and a quick lesson learned for the would-be king.

We do get classic slick James Wan action though, which ranges from small-scale skirmishes to fantastic all-out wars. Although the ripple of the stakes in nearly any of these fights aren’t felt on a macro level, the moment-to-moment brawls are fun to watch. That pure distillment of underwater popcorn magic sums up the entirety of the film. No, it’s not a train-wreck like many other bombastic action capers before it. One minute it’s a charming road trip movie, the next scene it moves into tepid romance, and later a creature feature. It tries. It’s really tough to think of a similar flick that packed so much into its lengthy runtime and said so little, but the cast’s charisma does just enough to carry the weight of the script on their shoulders.