When done right, few things are more entertaining than a horror comedy. When done wrong, few things are more insufferable. Dead Before Dawn falls somewhere in the middle. It’s a perfectly pleasant little indie flick made by people who mean well and even have a few decent ideas. It probably even could have been a rock solid 30-minute short film when cut down to only its best scenes. But it’s not a short, it’s a feature and so quality gags are padded out with any other gag that would fill in the script, and that kills off the good will earned elsewhere. Still, enough works to keep this thing from being a total disaster. That ain’t much, but it’s something.

Devon Bostick stars as one of those awkward young folks who star in horror movies. He can’t seem to get the girl, he’s easily rattled, he’s never gotten over his father’s death, and now he has to watch his grandfather’s creepy old occult shop! Golly gee! What a day! The good news is that his friends show up to make the night in the shop a little more bearable. The bad news is that they crack open an old skull and release a demon. As if that weren’t bad enough, they also start joking about silly rules that could be associated with the demon’s release if it were an actual curse and they all come true. So, for the rest of the night everyone they make eye contact with commits suicide and is transformed into a zombie/demon (or “zemon,” as they’re cleverly dubbed) determined to kill our heroes. The gang has until dawn to set things right, or the curse will go on forever. Can’t let that happen, right?

The trickiest part of Dead Before Dawn is that the filmmakers can’t seem to decide which type of horror/comedy they’re making: a straight up silly parody or a 80s-style flick that occasionally mixes in a few creeps with the laughs. At times, the film is broad slapstick, and at times, we’re supposed to treat the zemon threat seriously, but you just can’t have it both ways. The best material comes early on when the future-zemons start killing themselves and coming back from the dead. It’s far funnier than it has any right to be and at times approaches creepiness. As the film wears on, the filmmakers seem to lose interest in any sense of horror atmosphere in favor of cramming in as many jokes as possible whether they work or not. There are some hits, but there are plenty of misses and the movie never really settles into a consistent enough rhythm of good gags to gain much momentum.

Still, the performances are all fairly strong and engaging. In particular, Devon Bostick does his nerdy scaredy cat thing well, and Martha MacIsaac is consistently adorable as the requisite love interest (while Kids In The Hall vet Kevin MacDonald and the great Christopher Lloyd pop up in cameos to snipe in a few laughs and add B-movie credibility to the poster). The film also looks impressively slick despite the low budget and particularly rough CGI. There’s clearly talent involved here, however misplaced.

Dead Before Dawn is the brainchild of writer Tim Doirin and director April Mullen who also play small roles and made the mockumentary Rock, Paper, Scissors: The Way Of The Tosser and the goofy cop comedy GravyTrain. All three movies share the similar mixture of clever promise and tiring mediocrity. Doirin and Mullen are clearly talented, they just might be a little too in love with their own jokes and could use a third set of eyes for quality control. Their latest effort Dead Before Dawn isn’t a disaster. There are certainly far worse horror comedies shoved onto streaming services every day. It’s at least an enjoyable romp that doesn’t take itself seriously or demand that viewers do either. There are worse things to do with your time than watch this movie as well as far better things. So that’s that.

The trickiest part of Dead Before Dawn is that the filmmakers can’t seem to decide which type of horror/comedy they’re making: a straight up silly parody or a 80s-style flick that occasionally mixes in a few creeps with the laughs. 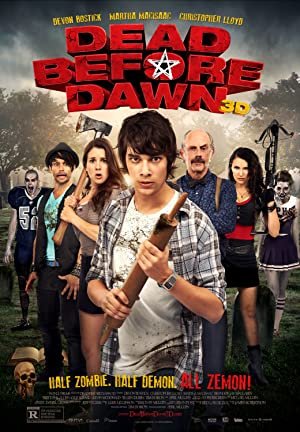