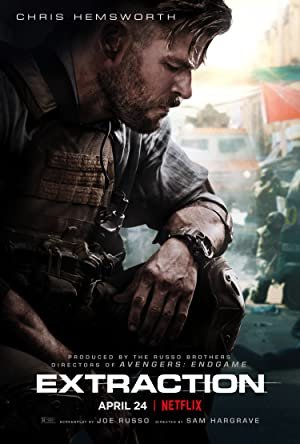 Now that the Russo brothers have made their mark on the MCU and have tapped a host of Hollywood contacts, it’s time for them to venture off into the wide world of big budget blockbusters. They’ve made a lot of friends over the years, many of which are present in their first major post-Endgame production, Extraction. You have Thor himself, Chris Hemsworth, at the helm, with MCU stunt coordinator Sam Hargrave giving it his all in his directorial debut. On paper it sounds promising; it’s just a shame that Joe Russo’s script couldn’t match the action.

The premise of Extraction is dead simple, though it spends an awful long time setting it all up and pretending that we care. One day Ovi Mahajan (Rudhraksh Jaiswal), the son of a druglord, is kidnapped by another druglord: enter Chris Hemsworth as…Tyler Rake (it’s okay to laugh), the mercenary with a heart of gold. You can probably see where this is going.

Rake is a ridiculous caricature; initially reluctant with a “mission first” attitude, before the curtain is peeled back and we see that he’s actually human inside. It’s the kind of thing that’s par for the course for an action film, but is far too much of a focus at the start and end of Extraction, to the point where it becomes jarring.  When Rake isn’t talking he’s very cool, as is his frenemy Saju (played by Randeep Hooda with more grace than Hemsworth), but we’re far too frequently brought into his psyche with the subtly of a mack truck careening into a fiery highway.

When we’re in the thick of the action, Sam Hargrave really delivers with his stunt pedigree, and most certainly has a future as a director. He knows what he’s doing, as evidenced by an early marquee long take action sequence that serves as Extraction’s main calling card. Barring a few sequences with some overly frequent cuts, most of the action is spot on in Extraction, with some brutal choreography and wonderful on-location sets. Action fans owe it to themselves to at least see Extraction once.

But it also has the lingering mood of “I’m a young adult and this is deep” permeating throughout the script. Extraction so very clearly wants to be the next Man on Fire (there’s an action callback for you), but eschews any sense of emotional and philosophical gravitas in an attempt to provide very gamey checkpoints between new action sequences. The last 10 minutes of the film are probably the most pointed example of that trope.

Extraction is a great beer and chips flick. When it isn’t trying to be anything more than a technically sound action film, it soars. But then it attempts to build a world to no avail, or prop up its mostly uninteresting characters for another 10 minutes and falls completely flat. John Wick and Fury Road taught screenwriters that less is more: hopefully, Hargrave’s next picture grants him that virtue.

Extraction has some high-octane action but not much else.
REVIEW SCORE
6.5
File Under: Netflix