It’s been an honour to watch Michael B. Jordan ascend into the hallowed halls of stardom. Slowly but surely he’s moved into more demanding and intense roles, playing to his confidence as a performer. That strength greatly propels him through Just Mercy, a sometimes by-the-numbers, often impactful historical drama.

Just Mercy isn’t solely about real-life lawyer Bryan Stevenson and his Equal Justice Initiative: it’s about the morality of the death penalty as a concept.

Jordan, who plays Stevenson at the start of his career, nails this quiet pain of being a black lawyer in Alabama in the ‘90s fighting for the rights of those on Death Row. You really get to see Jordan grow into this role as the film progresses, but never to the point of exaggeration. He’s cool and collected, sure, but believable. Jamie Foxx, who plays his key defendant Walter McMillian (who was falsely accused of murdering a white girl in 1986), is another one of Just Mercy’s secret weapons.

You really have to give props to Foxx for having the fortitude to play second fiddle despite the fact that he’s a massive star, which isn’t something a lot of actors of his calibre would do. As a result, Foxx’s subdued performance doesn’t dominate the film, allowing everyone else to sine, including O’Shea Jackson Jr. as his cellmate Anthony, who I firmly believe will win an Emmy or an Oscar one day. Then there’s Tim Blake Nelson in a classic character actor performance as the snake-like Ralph Myers: the sole witness to Walter McMillan’s crime.

There’s a lot at play in Just Mercy, which makes sense given its two hour plus runtime. You have the actual mystery of the crime itself, which unfolds throughout the film in real-time. Then there’s the courtroom drama, sequences in the prison and a look at Stevenson’s life, motivations and personal trials.

There’s a lot to juggle here and sometimes it drops a ball or two, but it gets the point across. As a whole, Just Mercy is an indictment of the legal system and the death penalty, and it makes a compelling argument for its ineffective nature. That’s mostly where Just Mercy strikes its emotional chords, showing us how individuals might be flawed, but are still ultimately human. Nearly everyone gives it their all, and the prison portions are some of the most harrowing and triumphant scenes in the film.

Although Just Mercy is rushed near the end and falls into a lot of emotional trappings (particularly during the courtroom scenes); the cast, the majesty of the true story behind it and the initial intrigue of the case ensures that it’s not just an entertaining film, but an important one. It just feels genuine, above all.

Just Mercy operates on a very familiar wavelength, but the performances are earnest enough to elevate it. 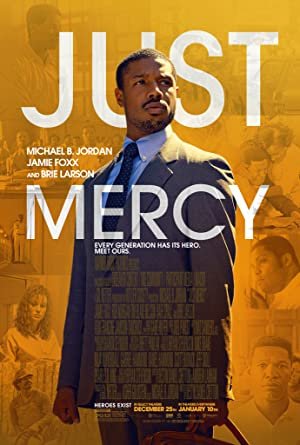