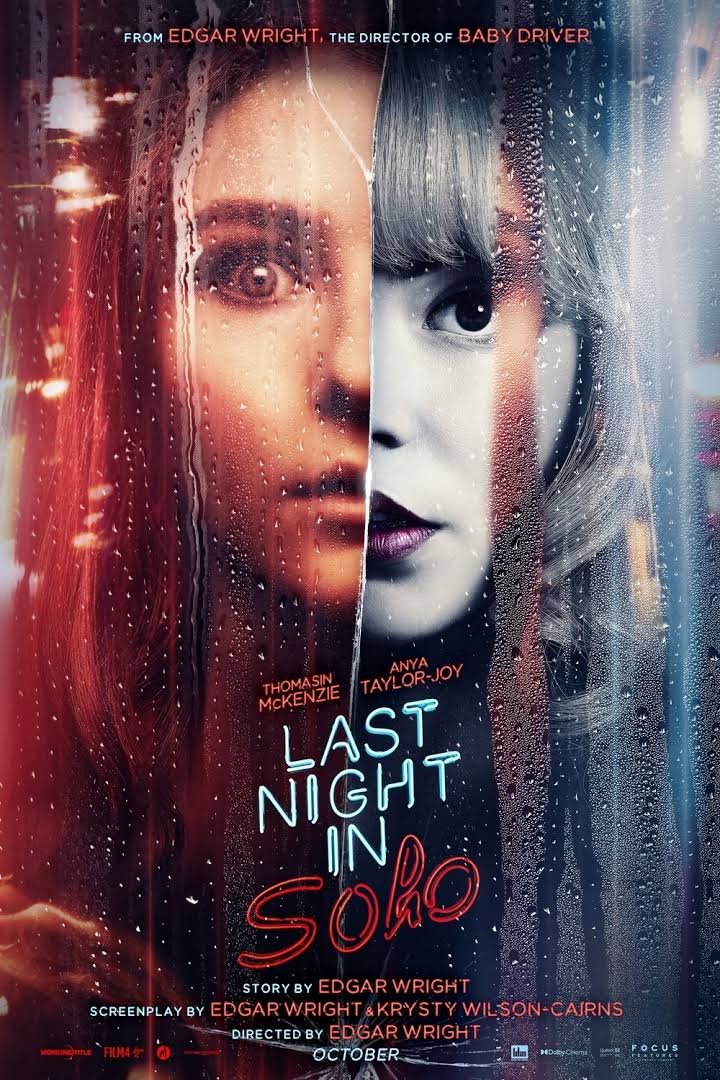 Last Night in Soho is a movie I would never have expected to come from the same director as Shaun of the Dead. Edgar Wright has crafted many films over his career, from horror-comedies to action blockbusters, but few as dream-like, or shockingly interesting as his latest outing. Last Night in Soho, currently at TIFF 2021, is a beautifully conceived and constructed love letter to London in the 60s, and one of the most physiologically unnerving films I have seen in a while.

Last Night in Soho follows Eloise (Thomasin McKenzie), a young fashion design student, as she makes the transition to university life, finally moving to London. This has been her dream for a long time. She is a young woman who lives and breathes the 1960s. From the music she listens to daily, to the aesthetic she calls upon for her art, this is a period of time that she has made part of her core identity. But even with this love of London, she quickly finds things are not as idyllic as she hoped. Her classmates torment her, she does not fit in, and she ultimately can not feel at home in the student housing she was so excited about.

It is here where she decides to take matters into her own hands, and looks to move out on her own, finding an apartment in a 3rd floor walk-up that is in her budget and fits all her needs. Despite her being a relatively normal young woman, she has a secret—the ability to see the dead—and this new apartment quickly acts as a beacon for these spirits. On her first night staying there, she finds herself living out someone else’s life, a young singer named Sandy (Anya Taylor-Joy), and gets to experience all the excitement and wonder that Soho of the 60s has to offer.

These trips back to experience Sandy’s life fill Eloise with a new sense of wonder, giving her inspiration in her design and life, plus the drive to try new things, like the glamour of singing to a crowd, to the new boyfriend that seems too good to be true. But in typical giallo-inspired style, all the good times need to come to an end, and they do in a soul crushing display of psychedelic excess. As Sandy loses herself in the depravity the surrounding people expect, Eloise finds herself descending into a waking nightmare she can’t awake from.

The slow transition from excitement to fear plays perfectly, giving the audience a taste of the struggle Eloise faces. What once was her escape-a-dream-like experience that filled all her desires, sours, leaving only dread, pain and the fear of losing her sanity. Edgar Wright masterfully blends the two worlds, making this movie a love letter to Soho, London, and the struggle everyone faces trying to make their way.

Last Night in Soho is a brilliant film that blends past ideas and concepts to build something completely new, exciting and visually striking. The visual style and art direction at play are jaw dropping at times, bringing to life a London that feels filled with possibilities while also being a place filled with malice resting just below the surface. The male gaze quickly moves from one of excitement to skin-crawling horror, with every touch being another bit of humanity lost to the grime of the city.

“Last Night in Soho is a wonder for the senses, bringing the viewer to a London that is filled with lights, excitement, endless possibilities and a dark underbelly waiting to strike.”

Things quickly move from psychological, to horror with some brilliant imagery that gives a sense of how Eloise is losing touch with her reality, and sinking deeper into the nightmare Sandy experienced. From the nameless faces of men looking to exploit her, to the blood soaked visions of potential murders, as the film progresses, there is plenty to make the horror fans happy.

But, even the best made film lives and dies by the actors that help bring it to life, and I am truly enthralled by everyone Edgar Wright and his team brought to the project. The two leads, Thomasin McKenzie and Anya Taylor-Joy, embody their characters perfectly. They feel made for the roles, giving life to the ideas in a way I did not think possible. Even the supporting cast take to their roles like a second skin, so much so, I don’t think I will ever look at Matt Smith the same way after seeing this movie.

Edgar Wright has proven once again he is a master of his craft. Last Night in Soho is a wonder for the senses, bringing the viewer to a London that is filled with lights, excitement, endless possibilities and a dark underbelly waiting to strike. This is Wright as we have never seen him before, but a way I hope to see much more of in the future. This film is a marvel to experience and one that anyone who has nostalgia for the past needs to experience. It is easy to fall in love with a dream of the past, but Last Night in Soho is a nightmare I will not forget.

Edgar Wright’s Last Night in Soho is both a love letter to 1960s London and a nightmare-like journey into man's depravity that I will not soon forget.
REVIEW SCORE
8.5
File Under: TIFF, TIFF 2021