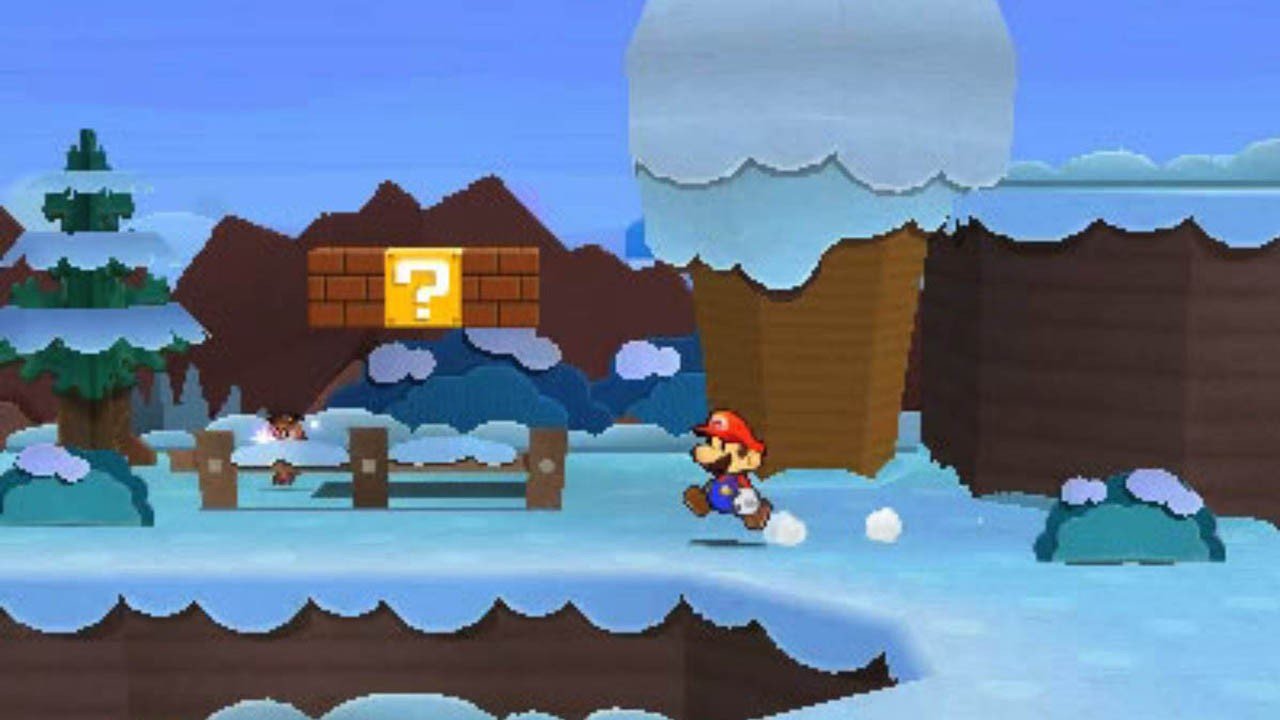 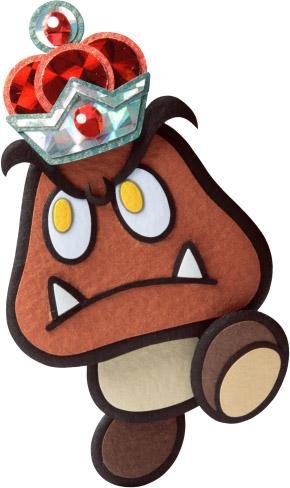 Back in ye olde days of the N64, Nintendo decided to bring Mario and his Mushroom Kingdom buddies back to RPG-land following the instant classic that was Super Mario RPG. However, what those coin-chugging programmers whipped up was not merely a straight sequel to their SNES title. Nope, it was a completely new game called Paper Mario that turned Mario and co. into 2D cardboard cutouts in a world that appeared to be comprised of dioramas. Paper Mario has gone on to become somewhat of a cult series for Nintendo. Sequels have popped up on the Gamecube and the Wii, each slightly altering the formula while keeping the aesthetic. It’s never been as popular or accessible as the company’s straight-up Mario adventures, but Paper Mario does play to that select cult of gamers who enjoy Nintendo’s magical world and also enjoy a little more challenge than the company’s usual pick-up-and-play adventures. The latest addition to the franchise just dropped for the 3DS and it fulfills expectations admirably. These games are never Top Five highlights of their respective consoles, but they are deep, immersive, and almost painfully adorable slices of Nintendo whimsy for a more mature crowd who just can’t let the Mushroom Kingdom go.

Now, the first thing you might be wondering is how a Paper Mario title could possibly translate to the 3DS given the 2D animation style that defines the series. Well fear not lil’ buddy, this is easily one of the finest 3D gaming experiences that Nintendo and put together yet. Yes, the characters are all flimsy cut outs, but that just makes them pop out from the background that much more clearly, while each level looks like a carefully crafted art school diorama for the figures to play in. The developers at Intelligent Systems clearly had a blast playing around with perspectives and finding ways to fling characters at the screen. The game really pops in 3D and the added depth often helps immeasurably with puzzle solving and platforming. If you’ve felt that none of the 3DS games thus far have really taken advantage of the system’s unique display technology other than Super Mario 3D Land, then prepare to be very happy. This is a game designed for 3D that wouldn’t work as well without it and hopefully Nintendo has a few more tricks like this up their sleeve on the way.

The story is exactly what you would expect from this or any Mario game in history. Bowser comes to the Mushroom Kingdom and causes all sorts of trouble that only a certain plumber/gentle ethnic stereotype can solve. This time Bowser busted up the annual Stickerfest celebration. Stickers were hoarded up and the Sticker Star had planned to come from the heavens to answer all of the Kingdom’s wishes. Of course with Bowser being a jerk/monster, he smashes the sticker star and sends pieces (as well as stickers) flying out across the land. Mario will have to travel far and wide to fix this dangnammit, aided by a new magic star buddy Kersi who flies around Mario’s head to offer jokes/advice like The Great Gazoo from The Flintstones (don’t worry, he’s mercifully less annoying than that cartoon disaster). So, that’s the plot and as with all Mario games, you judge by how things happen rather than what happens. While no Mario plot would be described as a hard-hitting emotional drama, the Paper Mario games have always been particularly playful. Cut scenes are filled with animated slapstick to take advantage of the paper cut out world while the standard Mario plot conventions and clichés are gently mocked along the way. Sure Sticker Star doesn’t exactly break new storytelling ground for the Paper Mario series, but it follows and toys with the formula about as well as possible.

All Paper Mario games tend to reinvent the specific gameplay mechanics of the series and Sticker Star is no exception. Sadly, the multidimensional flipping and real-time action of the Wii’s Super Paper Mario has been dropped, which is a shame because the visual design would have been perfect for 3D and the new action focus was actually an improvement. Instead, the game returns to the turn-based RPG fightin’ roots. Leveling up and XP are gone though. In their place the entire gameplay hinges on…wait for it…stickers. There are stickers absolutely everywhere in the game. You can peel them off of walls, find them hidden in secret areas, buy them in stores, and earn them in battle. There are 96 varieties of these stickers and each one is a single use fight command. So to jump on an enemy, you’ll need a boot sticker. Run out of stickers and you can’t fight, but there are so many kicking around that rarely happens. The concept actually works reasonably well for the turn-based fights. It’s nifty twist on a tired format and the stickers are so easy to find and collect that you’re rarely left defenseless in any given fight. You still use commands during fights to increase the duration and strength of any attack, how you use those commands is just based on which sticker you’re using. Most of these are small, but there are a few big ones (giant scissors, a giant shoe, etc) that are needed for boss battles. These big stickers are the only way to defeat bosses and each boss has their own form of sticker kryptonite. Unfortunately it can be hard to judge which big sticker is needed for each boss, so you have to be careful not to waste them and will normally lose a few rounds with each boss experimenting until you find the right one.

That’s certainly an irritating inconvenience, but not one that’s uncommon in RPGs. The game’s one major flaw comes in the other form of collectible stickers. These are 64 creatively named “thing” stickers like a giant fan or a giant violin. They come into play in puzzle solving. Your buddyKersi can flatten out the world at any time and creative placement of a sticker can solve a problem when the world is stretched back out. Many of these puzzles are obvious, like putting a bridge sticker over a body of water that you need to cross. However many of these are far from obvious and require tedious trial and error with few hints to go around. Even more frustrating, all of the Thing Stickers can be found in hidden areas, yet you need to collect all of them to solve required puzzles in the game. Now, that’s not a major issue and pretty standard in RPGs. Where the trouble lies is the fact that there is no indication whatsoever if you’ve left a Thing Sticker behind after completing a level. That means that you’ll find yourself backtracking for hours through every level at times, struggling to find a hidden goat sticker that you may or may not need immediately. Given the fact that this is a pretty long game as it is, that design flaw makes the game move at a frustrating snail’s pace at times and really should have been fixed before launch.

Thankfully, that’s really the only major flaw with Paper Mario: Sticker Star. Sure, if you hate RPGs or previous entries in the series you’re not going to get much out of this game. However, if you’re a longtime lover of this goofy ongoing Mario side project then it’s hard to imagine you’ll be able to express anything other than uncontrollable tearful joy while playing through it. The sticker concept works well and in a decent addition for future entries in the series. While I would have preferred further continuation down the real-time action path from Super Paper Mario, I suppose the Big N is wise to retain the RPG-light quality of the franchise to keep it distinct from all of the other Mario games out there competing for attention. You can’t exactly call this title as universally appealing as regular Mario adventures, but for folks who need a little extra challenge in their goomba trampling or nervous nellies looking to sample an RPG for the first time without committing to a full-on Square epic, Paper Mario fills a need. This franchise hasn’t really had a miss in its history yet. Granted, it doesn’t have a single defining gaming masterpiece either, but if the folks at Intelligent Systems keep cranking out new chapters this creative and diverse, they’ll inevitably stumble onto one of those even if by accident.

Now, the first thing you might be wondering is how a Paper Mario title could possibly translate to the 3DS given the 2D animation style that defines the series. 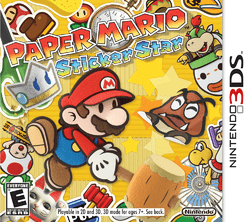