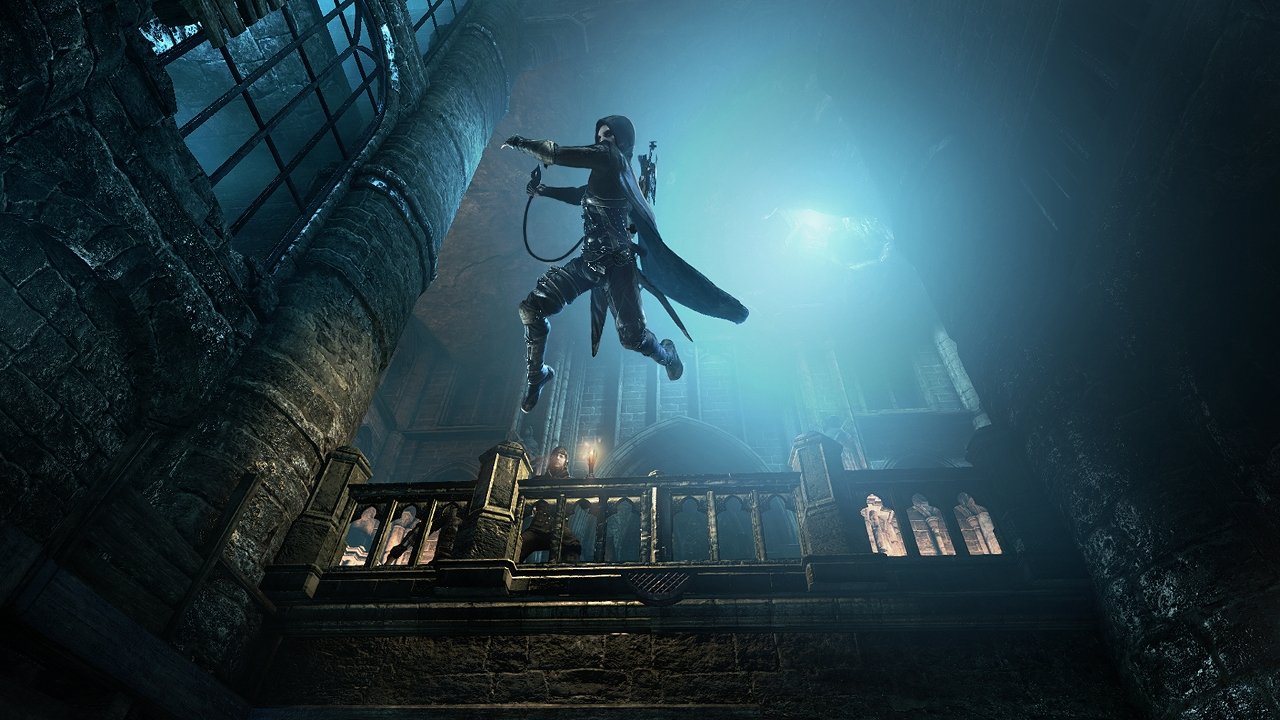 Back in the mid-90s Thief and Deus Ex where the king of nonlinear gameplay on the PC. They offered players many possibilities to achieve objectives and rewarded experimentation. Eidos Montreal presented fans with a fantastic instalment in the Deus Ex franchise in 2011 with Deus Ex: Human Revolution. They are at it again, only this time with Thief, a new game set in the Thief universe starring everyone’s favorite outlaw, Garrett.

The demo shown at E3 was pre-alpha, so many of the things seen could change drastically in the final product. As it stands now, the game is reminiscent ofDeus Ex: Human Revolution, even down to the way characters move and react. It looks solid, but also generic. The feel of the previous Thief games is back, including the dark, industrial city with stone and smoke everywhere. Running on a PS4, the game is clearly pushing more polygons then have been seen in Deus Ex, yet it somehow still feels flat. The darkness of the word hides much of what is shown to the player. Additionally, the shadow indicator is present on screen at all times, and there’s fog around the viewing area, make the game feel extra muted and very dull.

The demo starts off with a mission to steal the ‘heart of the lion’, a precious gem. Starting off in a courtyard, it is up to you as the player to find a way into the mansion, choosing to be lethal and kill everything in your path or be stealthy and avoid all detection. For the demo stealth was chosen, although it was shown how there are plenty of instances to use the arrows and other gadgets to rain destruction on enemies. The arsenal of arrows and other gear seems mostly unchanged. There are all the key arrow types, water, fire, blunt, etc, which can be used in many different ways as the situation presents its self.

Along with all the gadgets there is now a Batman-style focus mode that lets you see objectives along with enemies and obstacles. When demonstrated, it seems to take away much of the trial and error that many players liked about the previous Thief titles. It presents a guided path to what can be done and although it can be very useful to learn the mechanics and experiment, it would be nice to see Eidos put a limit on this ability at higher skill levels.

As Garrett moved though the mansion, the stealth style of gameplay appeared mainly intact. Making noise to distract guards, walking though passages and climbing on the roof are all present. Navigating though the dark seemed to be painless, and even for novices it seems Eidos have made stealth an easy proposition. It is hard to judge how well seasoned players will find this aspect, as it seemed to lack any real challenge. That being said, the key aspects of what made a Thief game are still intact.

Garrett does seem much more lethal in this installment of the game. Thief takes cues from modern titles, ensuring that even when caught, there is always the choice to fight your way out. In previous titles, fighting was always the last resort. It seems it has been adjusted here to ensure that novice players failing at stealth can still survive. It has yet to be seen how experienced players will take to this sort of gameplay, since it does take out much of the dread of being caught that fueled previous titles.

The second part of the demo demonstrated a linear escape section of the game. As Garrett tries to flee with his ill-gotten prize, the guards pursue him, with tension amplified by a fire slow collapse of the building. It looked gorgeous, although seemed to fall into the Call of Duty style of set-piece where if nothing blows up it is not acceptable. The subtle nature of the first part of the demo seems undermined by the bombastic escape and does not seem to fit the Thief style of gameplay. That being said, Eidos have done a great job at making the world change as the fire slowly envelops the structure, with beams falling and floors burning up. It was the one part of the demo that exemplified the new tech being used and how the game engine is more advanced then what was seen in Deus Ex.

Thief could be a great title when it launches in 2014, yet at this time I have some reservations on how it will all work together. I want to see a game that goes beyond Deus Ex with a new coat of paint. I also want to ensure it does not fall into the trap of action for the sake of action. There is potential here and I am interested to see what they do with it. CGM will be reporting on Thief and all other titles we have seen at E3 as we learn and see more. Stay tuned to CGM for all your coverage on E3 and the world of comics and gaming.