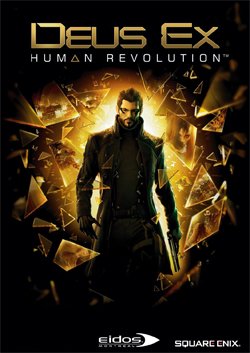 Deus Ex is finally here, and for those who were worried about how Eidos was going to tackle this series, doubts can be laid to rest. This is an excellent game, and a worthy addition to your collection if you are an old school gamer. For newer gamers, this is a game that is going to intimidate and possibly change your conception of how games can be played, and it does it not by offering anything new, but instead by offering something old, that used to be in action games; choice.

In The Future, Detroit Still Sucks

Deus Ex: Human Revolution is, chronologically speaking, a prequel to the previous games. Set in the year 2027, 25 years before the original game, the story looks at corporate security man Adam Jensen. His life is brutally changed when an attack on his employer, Sarif Industries, leaves him a heavily augmented cyborg, while his ex-girlfriend—a promising researcher on the verge of a major breakthrough—is purportedly dead. Things are not what they seem however, and as Jensen returns to his job after six months readjusting to life as a cyborg, he investigates the attack, uncovering a conspiracy that will take him to the seedy backstreets of Detroit, the two-tiered city of Hengsha in China, Montreal and even Singapore.

The presentation of the game is mixed, and, unfortunately, is possibly the weakest aspect of the game. There’s a talented art team at work and the French flair for light is abundant in the deep gold that pervades most aspects of the game’s atmosphere. However, the engine Eidos Montreal is using not on par with other multi-platform engines in use today, such as the Unreal Engine’s astounding renders of Batman, or detailed environments of the upcoming Battlefield 3 and its impressive Frostbite Engine.  There aren’t a lot of polygons being pushed around on screen—this is particularly evident on characters—and the textures are not as detailed as higher profile titles. There’s also an obvious recycling of motion capture assets with several female characters doing the same “arm jig dance” as your personal pilot, with the same inappropriate movements during conversation. Lighting is, unfortunately static, so don’t expect to see any dynamic play or shadowing at work here. Some visual glitches are also present, such as characters spawning incorrectly inside objects (which looks both morbid and disturbing when you see them simultaneously rising from the floor while phased into an office chair) and occasionally Jensen can fall through invisible holes in the world. What really saves the game is the art direction. It’s obvious that Eidos Montreal simply made their entire art team watch Bladerunner over and over and told them to emulate that. The same retrofit aesthetic of that seminal film is evident here, right down to shades opening to allow shafts of light to filter into smoky rooms adorned with a mix of computers tooled in the Baroque period while dusty books and monochrome photos sit comfortably beside them.

The sound takes a similar approach, devoutly following in the footsteps of Vangelis (or for the less familiar, Mass Effect) for the score of the game. Expect a lot of moody synthesizer compositions punctuated by some orchestral accompaniment during the more dramatic moments. Dialog is also a strong point, with Eidos Montreal taking the road less travelled and not having everyone speak in English. During portions of the game that take place in China, players will be treated to authentic Mandarin and Cantonese dialects spoken by NPCs. Adam Jensen, the hero, is voiced by Elias Toufexis who does an obvious, but passable homage to Christian Bale’s Batman. All the supporting characters manage to give decent performances on par with BioWare’s own impressive efforts. The sound effects while not inferior, don’t really distinguish themselves either. The gunplay in particular doesn’t sound as “meaty” as other dedicated FPS games, but considering the scope of the game, and how many other effects it does do correctly (like the hacking mini-game) they manage to hold their own. Just don’t assume this game will be a wall of sound like a typical FPS and expectations should be met.

There Is No Wrong Choice

Deus Ex manages to do something that many games have failed to do; provide meaningful choice to the player. The most surprising thing is, this isn’t a choice based on morality, but of gameplay. Like its predecessors, Deus Ex: Human Revolution isn’t a straight up first person shooter, but rather an action RPG in first person that provides multiple options to resolving situations.  For the more combat oriented, there’s the Uncharted/Gears style of classic, cover-based shooting. For the more Metal Gear inclined, sneaking past patrols, incapacitating guards and hiding bodies will allow the stealth fan to sneak through obstacles undetected. And for the more technology oriented, it’s possible to hack computers, disable cameras, and even take control of security turrets and attack robots to turn them against their owners. Whether you want to kill every single enemy in sight, or pass through without killing a single person, there is always an option (or air vent) to empower your preferred play-style.

Obviously this is nothing new, as the original Deus Ex was based on this very premise, but after years of Modern Warfare style set-piece action sequences, and controlled, linear gameplay experiences, the open play-style of Deus Ex: Human Revolution is daunting, and, to more modern players, perhaps even too difficult to grasp. Aside from an initial tutorial heavy first two hours, once the hand-holding stops, players find themselves in an open world that waits for player initiative to uncover its hidden offerings, rather than directing them to its secrets. There is no “wrong” way to play this game, and the sheer amount of thought that has gone into every level to make it approachable to different play-styles is astounding. The game even takes a page from Mass Effect with some dialog based “obstacles” that have Jensen trying to negotiate with various characters, either attempting to reason with them, or “cheat” by using an enhancement to read their personality and choose appropriate responses augmented by pheromones.

There’s also an RPG component, as experience points are accrued for just about everything done in the game, whether it’s killing enemies, tranquilizing them, or simply discovering an obscure cache of loot squirreled away at the bottom of a ventilation shaft. The only real blemish on this otherwise impressive amount of choice is the fact that so much of it is taken away during boss fights. Excepting the final boss fight, most others are straight up shoot outs that are much more difficult for the stealth or hacker-based players since the options to hide or turn technology against the opponent are now suddenly taken away. There is also the matter how closely the game follows in the footsteps of the original. Many of the conventions from the first game are followed—almost religiously—in the latest. Pocket secretaries will still contain passwords for computer access for those that can’t hack, and computers that are hacked will also contain passwords, all in plain text, even for the highest level of security. These were criticisms of the original game even back in the 90s and those criticisms are even more pronounced today, though the rationale is understandable from a gameplay perspective.

Deus Ex is also, depending on depending on preferred style, a very long game. Even for players in a rush, skipping every side mission and ignoring all opportunities to level up, don’t expect to see the credits roll for at least 10-12 hours. For most players, taking the time to explore and enjoy the game, it’s more likely to clock in at about 20+ hours, and very likely over 30 hours for people that want to explore as much of the game as they can. This is game that traditional hardcore gamers can safely buy and enjoy. There’s an enormous depth and complexity to the gameplay, with decent production values and a story that ties into the mythos of the series. The only people that will find disappointment here are the casual/mainstream gamers that believe a first person game must only be about shooting and nothing else. For everyone else, Deus Ex: Human Revolution is a definite nominee for game of the year, with impressive design, a large scope and a surprising amount of choice. If you miss the more experimental, bold gameplay of the 90s, this is a game you want on your shelf. In the same way that Duke Nukem Forever represented the 90s gaming era at its worst, Deus Ex: Human Revolution encapsulates the best of that era.

There’s an enormous depth and complexity to the gameplay, with decent production values and a story that ties into the mythos of the series.
REVIEW SCORE
9
File Under: Action, Adventure, PlayStation, Shooter