Attack on Titan fans should prepare themselves to slay more titans next year.

Koei Tecmo announced today that a follow-up to their 2016 Attack on Titan game is currently in development. Along with an announcement trailer, Koei Tecmo has released a teaser site which features the game’s title along with key art. Exact details on the game’s features haven’t been detailed yet but the new title will build on the action gameplay found in the first game while adding a heap of new mechanics. The game will be releasing in America as Attack on Titan 2 in early 2018. 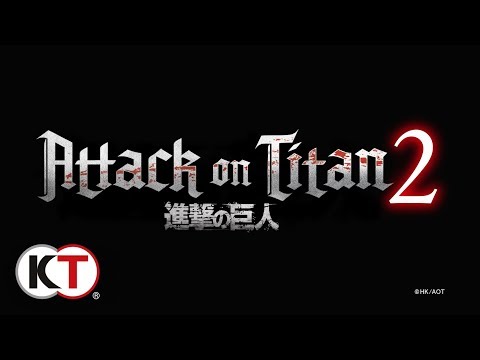 Created in 2009, Attack on Titan is a Japanese manga series written and illustrated by Hajime Isayama. The story centres on a boy named Eren Yaeger and his childhood friends after they join the military to fight Titans, mysterious gigantic humanoids that feed on humans. Since the release of its anime adaptation in 2013, Attack on Titan has become a worldwide phenomenon. The series’ long-awaited second season began airing in Japan this April, spanning 12 episodes and finishing sometime in June.

Koei Tecmo released their first game based on the popular series in 2016 for the PlayStation 3, PlayStation 4, Xbox One and PC. A PlayStation Vita version of the game was also released exclusively in Japan. The Attack on Titan game covers key moments of the early parts of the series while also adding new scenarios for the main characters. With visuals created to match the anime adaptation’s style, the Attack on Titan game featured combat that pitted players against multiple titans. The 3D Maneuvering Gear that the series is known for can be used freely to ascend to higher areas in the game. The game performed well, selling nearly one million copies by the end of 2016.

Attack on Titan 2 will release next year. Platform details along with other details will be revealed in the coming weeks.