A new trailer introducing the latest game in the Assassin’s Creed franchise made its debut during Microsoft’s E3 conference along with a short gameplay preview, highlighting some of the title’s unique features. A new upgrade system will be introduced In Assassin’s Creed Origins along with enhancements made to the combat system Assassin’s Creed is best known for. Another feature shown was the ability to control an eagle, allowing players to get a better view of the area and target enemies. 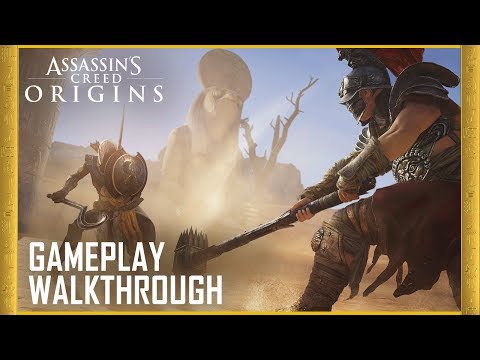 Earlier this year, Rumors spread around the new Assassin’s Creed title, confirming the game’s name and setting. The rumors suggested that Origins would have two lead characters, a fact that wasn’t revealed to be true during the game’s official announcement. The rumors also claimed that players would be able to visit other locations outside of Egypt such as Greece with the game’s map size being compared to Bethesda’s Elder Scrolls: Skyrim. Other features such as controllable boats and naval combat were also announced but this is also unconfirmed to be true or not.

After the release of Assassin’s Creed Syndicate on PlayStation 4, Xbox One and PC, Ubisoft skipped went a year without releasing a new title, breaking the franchise’s annual release history. Ubisoft did confirm that a new Assassin’s Creed title would be released during the current fiscal year, running through until March of 2018.

The newest Assassin’s Creed game will be available on October 27, 2017 for the PlayStation 4 and Xbox One.