Fortnite’s latest content update gives players a new Shockwave Grenade that launches them to epic distances and even through structures.

When players use the Shockwave Grenade, they will not take fall damage, either. This also applies to enemies and vehicles as well. The item can also knock back players and annihilate objects in their way.

Players can find the Shockwave Grenade in chests, supply drops, llamas, and vending machines. The epic item drops in stacks of two and a maximum of six. 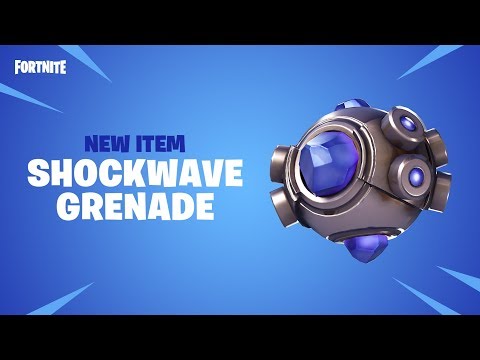 Fortnite Battle Royale continues to get more attention with it Solid Gold LTM. In this mode, players get to duke it out with only legendary weapons in a 50v50 match-up.

As for Fortnite Save the World, the fourth week of the Horde Challenge is here. Players must build bases and have lots of ammo, since traps won’t trigger this week when Husks walk either over or near them. A legendary weapon — the Redline Ramirez — is on the line when completing the challenge for the first time.

Meanwhile, a new Mythic Ninja will be joining the fight in Fortnite Save the World. Their new ability is Kunai Storm, where players can flip backwards and throw 15 knives downwards. Perks include Kunai Collection that reduces its cooldown by two seconds after enemy eliminations, Kunai Barrage, which increases the damage and number of weapons thrown by Kunai Storm, as well as Kunnaihilation, where kunais randomly explode and deal damage.

The Mythic Bladestorm Enforcer Ninja will be available in the Event Store on August 29 at 8 p.m. ET.