The upcoming multiplayer mode in No Man’s Sky lets players team up with a group of friends to explore the universe together. There’s also the option to join up with random travellers that players meet online. In this mode, players can either help keep their friends alive or prey on others for the sake of survival.

Shelters and complex colonies can also be built together and shared with the team in the midst of fighting as a pirate or a wingman in space. This mode also lets players race across alien terrains and create tracks and trails that can be shared online with others.

Meanwhile, the game will also get an extensive visual overhaul. Players can play in either first or third person both on-foot and in their ship while gazing into improved space visuals. Planetary terrain generation will be improved alongside this in terms of ground textures, water, and clouds. In addition, more detail will be added to ships, buildings, and NPCs.

As for the bases, it will be unlimited and players can build them anywhere on any planet. With increased complexity and size limits, players can own multiple bases, as well as build them bigger and better than ever before.

For command freighters, they allow players to create and upgrade a fleet to send out into the universe. Players can command them to help while exploring a specific system. What’s more, only adding to the multiplayer mode, friends can be invited aboard where they can take on missions together. 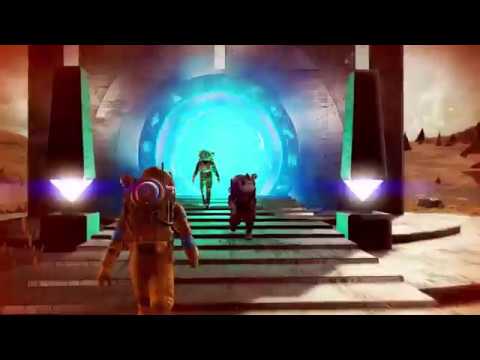 No Man’s Sky on the Xbox One will launch on July 24 in North America and July 27 in Europe. The game originally launched on Aug. 9, 2016.

Liked this article and want to read more like it? Check out Elias Blondeau’s review of No Man’s Sky when it initially launched.