There’s no doubt about it: kids love Skylanders, and all they’ve ever wanted is to create their own Skylander and bring it to life. Well, its a happy day for your youngster gamer, because that creative dream is coming true.

Announced with a trailer and a press release, Skylanders Imaginators is the latest entry in the annually released Skylanders franchise. Character creation being their most requested addition to the series, players worldwide will now be able to bring their creations to life in the world of Skylanders.

“We’ve turned this year’s game into the ultimate blank canvas for kids’ imaginations so they can create and play their own Skylanders.” said Eric Hirshberg, CEO of Activision Publishing, Inc. Hirshberg also reiterated that Toys For Bob, creators of the Skylanders franchise, have been receiving fanart and letters of original characters from kids ever since the first game’s release. The character creation will be accessed upon the activation of a “Creation Crystal” figure, which will be priced at $10 at launch.

An exciting new gameplay feature for this year is the inclusion of a class system, called “Battle Classes”, that will be “taught” to players through “Skylanders Senseis”. There are 31 Senseis in total, and will include past villains that have been fan-favourites of the series. The Sensei characters will cost $15. In addition, all 300+ Skylanders figures will be compatible with Imaginators, including the vehicle figures introduced with last year’s release.

Activision and Toys For Bob also announced the Skylanders Art-to-Life Contest, which will give fans a chance to submit their designs for a Skylander included in the game upon launch. Skylanders Imaginators will release on October 16th on all major platforms with an MSRP of $74.99. 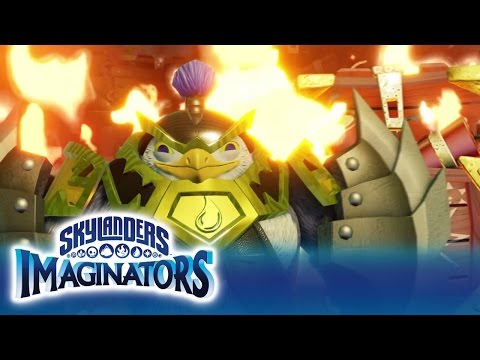