What is this, a crossover event? 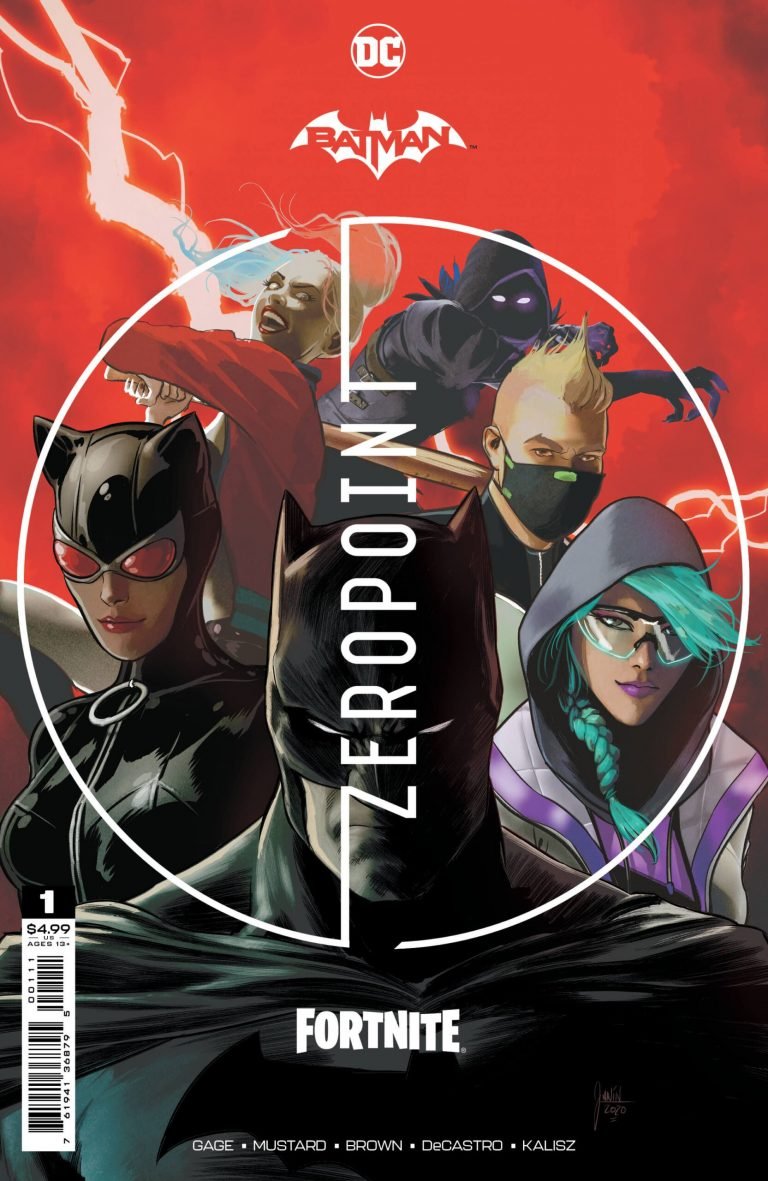 I’ve read the first issue and I’m pleasantly surprised but it’s really tough to review without knowing where the story goes next.

When I was growing up crossovers in comics were incredibly common. Batman was no stranger to joining forces with other pop culture properties. From the Ninja Turtles, Predator, Hellboy and teaming up with Marvel’s S.H.I.E.L.D. in 1996 he’s made a ton of friends and enemies far outside the walls of Gotham City.

Batman/Fortnite: Zero Point comes out both, physically and digitally today, Tuesday, April 20, 2021. Further issues will ship twice monthly beginning in May (May 4/May 18) and June (June 1/June 15), with a single issue concluding the series on July 6.

For fans of the game you’ll be happy to know that each print issue of Batman/Fortnite: Zero Point will include a redeemable code for DC-themed digital items within Fortnite that are inspired by the events in the comic. The first item available will be the new Rebirth Harley Quinn Outfit. US Subscribers to DC UNIVERSE INFINITE will receive the series for free, including the bonus digital codes. Fans who redeem all six codes will also unlock a new Armored Batman Zero Outfit for their Fortnite character. Honestly, this seems like the biggest draw right here, as Fortnite items tend to be on the pricier side as my bank account will attest. Who does not want a Fortnite Batman Zero Point Code to make your comic experience a bit more fun.

The story was written by Christos Gage and was overseen by Donal Mustard, the Chief Creative Officer of Epic. Four different artists contributed art to the series Reilly Brown, Christian Duce,  Nelson DeCastro, and John Kalisz. The main cover for issue #1 main cover is provided by Mikel Janín and the variant cover by Kenneth Rocafort. The artwork for the first issue is grittier than Fortnite but a lot more colourful than your average Batman comic. It’s a nice blending of worlds with some striking imagery. As far as panel layouts go however, I found them rather bland and straight forward and it would be nice to see more risks and creativity on display. It reads very straightforward and I assume it is to pull in first time comic readers.

The story starts with a crack splitting the sky above Gotham City which is similar to the tears we’ve seen in Fortnite. Batman, no stranger to things appearing in the sky leaps into action right away as this first issue jumps right into the action. He is soon met by Harley Quinn who of course wouldn’t miss out on getting in the way and causing destruction.

Batman is quickly sucked up by the rift with no memory of who he is or where he came from, and in hindsight he really should have called Martian Manhunter to help out. Once he wakes up he has no memory of who he is but does know how to use Bat gadgets without problem. How he can’t deduce his name is Batman, considering he wears a giant Bat on his chest is beyond me. I did get a laugh when Batman realizes like all Fortnite characters he can’t talk, making a majority of the dialogue stem from Batman’s inner monologue.

Very quickly Batman runs into a rogue gallery of Fortnite characters. Frankly, I have no idea what they are called but can recognize Tomato Head guy, the gold guy, a vikiing and of course the pink teddy bear.

Without giving away spoilers Batman and Harley are not the only characters from Gotham City stuck in the Fortnite world. Batman must team up with an unlikely ally to fight an oncoming storm and take down the rest of the Fortnite characters who are hell bent on destroying them.

The story ends on a gigantic cliffhanger and leaves the reader with a large number of questions. It certainly doesn’t divulge any information right off the bat. Reading this issue feels like I got half an appetizer. It’s just barely enough to sink my teeth into and would have probably benefited being a double issue.

Batman/Fortnite: Zero Point is said to uncover secrets never before revealed in game or anywhere else and I’m curious to see what those are. I still play Fortnite from time to time but not in the way I once used to. Perhaps it’s something about the mystery hatch, has that been solved?

I have no idea where this series is going but it has definitely piqued my interest. I wouldn’t say it’s great but it was an enjoyable enough first read and the artwork is quite nice. The world is full of colours (because Fortnite) I’m not used to seeing in my Batman comics and I’m a sucker for crossover events. They can take risks and usually get pretty wild.

The second issue will be dropping May 4th, until then the fate of Batman and the rest of Gotham remains a mystery. Also, where the F is Peely?

If I Was a Kid I’d Be Freaking Out How Cool This Was, as an Adult I’m Cautiously Optimistic.
REVIEW SCORE
8
File Under: Batman, Fortnite