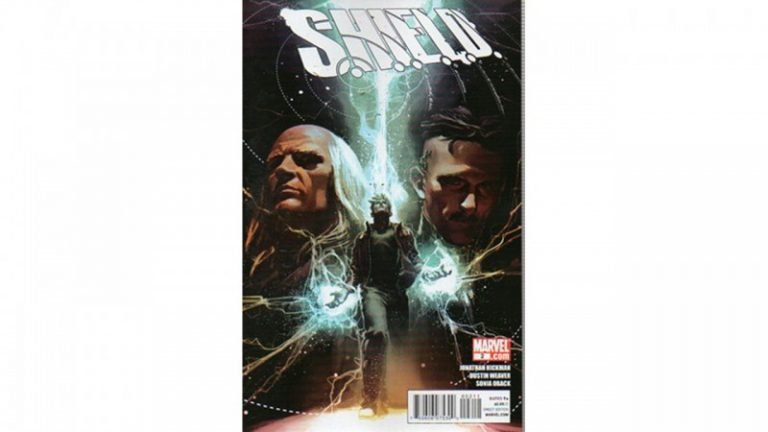 When this series was first announced, I thought it would be a very different animal than the one we ended up getting.  To Hickman’s credit, it was far different than likely anyone would have expected, as it didn’t focus on all the usual suspects one might think of when they think of SHIELD, but instead drew upon important and memorable historical figures for its inspiration.  The main storyline in the series is at times a bit confusing, often deliberately so, but at the same time there’s a ton of really strong material to be found in both this series and its predecessor.

Whereas the first series was all about setting up the world that this book exists in, the second series is about drawing all the threads together, and resolving them all, one by one.  For fans of Hickman’s work on Fantastic Four or Secret Warriors, he will sometimes show us some of the links between the three books, and Secret Warriors in particular did this to great effect, as it appeared that Da Vinci brought about the original Zodiac, not to mention helped start the science of life model decoys.  That particular thread is examined in this issue, as we see perhaps whose skeleton was in the coffin found by members of the Zodiac during the Cold War, which helps close the loop on SOME Of the lingering questions surrounding Da Vinci.

With all that being said, the focus on this issue, and this series as well now, is on what happens next, no longer looking backwards but instead looking forwards, to complete the tale set before the reader.  Leonid isn’t the most engaging character, but it’s the characters around him, like the Night Machine, Nathaniel Richards, Howard Stark and Da Vinci that prove the most enjoyable to read.  Hickman’s put some serious effort into their dialogue, their interplay, and it shows.

The artwork by Dustin Weaver continues to be of high calibre, and only seems to be getting stronger and more solid with each passing issue.  I have less issues with the artwork, as his control on detail becomes more refined, and he becomes even more comfortable with these characters and his collaborator.

This is a solid and enjoyable read, which is definitely made better if you have  been reading Hickman’s other recent works at Marvel.  Quite enjoyable, and definitely worth the price of admission (despite at times  being head-scratching).

S.H.I.E.L.D. #2 is a solid and enjoyable read, which is definitely made better if you have been reading Hickman's other recent works at Marvel.
REVIEW SCORE
8
File Under: