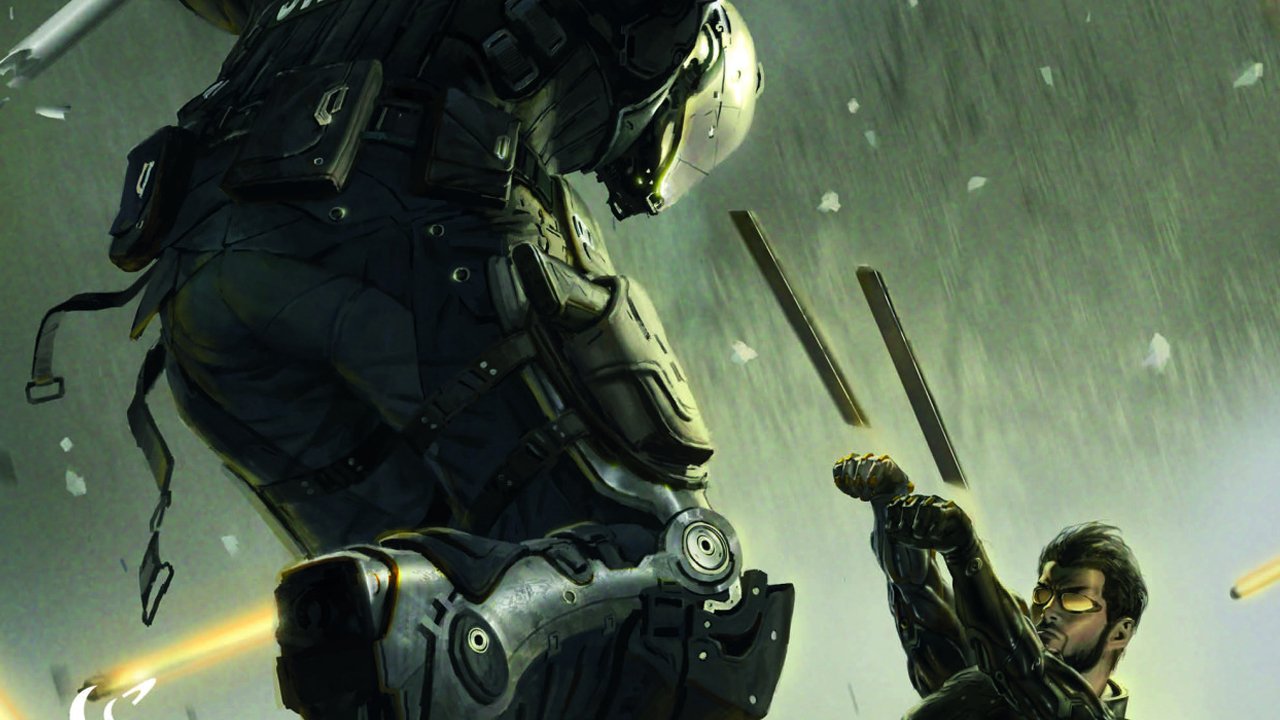 The world of Deus Ex is pretty brutal. I learned this pretty early on in my life by playing the original creation from Warren Spector back in 2000, just several years after I had watched the world of Metal Gear Solid struggle with similar topics of human augmentation, war, and human nature. It gave me a lot to think about, and even if the 2011 prequel didn’t quite impact me in the same way, the idea of becoming a “better species” is always present, giving it at least a tertiary relevance.  That sums up how I feel about Deus Ex Universe: Children’s Crusade, a new graphic novel that collects five volumes and is linked to the recently released Mankind Divided.

Part of the brilliance of the Deus Ex series is its open-ended allowance of choice (in a CD Projekt Red, actually open morally grey Witcher way, not a Bethesda, “you’re still going to be good no matter what” Fallout 4 way), and some of that is obviously lost here. But the ability to gain some added knowledge on the goings on of the Deus Ex universe and a slight insight in the character of Adam Jensen—in terms of how he’s seen by other creators—gives a bit of context to the game world. An unnecessary context sure, but one that was ultimately welcome by the time I closed up Children’s Crusade.

We’re mostly spared a lot of gritty, hard-boiled style “I am the night” dialogue in Alex Irvine’s script, and instead we get a lot of natural lines that even permit a little expression and allow you to imagine the cadence of several people’s speech patterns. The actual narrative is centered on child-augmented soldiers, and although the potential is there, we don’t really get a massive payoff or anything controversial.

At this point if you’ve played Deux Ex you’ll have a lot of “oh I remember that!” moments in some panels (like the re-creation of the hacking UI), which, depending on your point of view, are cheesy or true to the source. I’m somewhere in the middle as it gives off the allure of a unified cross-media franchise, but it is overdone in several volumes to the point where it doesn’t feel necessary. However, including multiple biography sections for major players in the game series and “Aug vs. Human” propaganda posters at the end of the trade is a nice bonus though.

John Aggs’ art is sort of hit or miss in terms of quality, with some scenes really standing out (like overhead shots of Jensen leaping into a fight), and others falling flat and lacking a striking amount of detail (one shot has a guy’s head getting blown off but there are only liquid chunks surrounding the fallout despite the fact that the rest of the issue has tons of gore and dismembered limbs). The same goes for the characters, most of which kind of just blend into the background with the notable exception of protagonist Adam Jensen. He commands nearly every scene, and the design on his battle armour has an almost Alien-like quality to it.

I don’t know if I’d recommend Deus Ex Universe: Children’s Crusade to anyone outside of those who have already played through both games, but there’s very little that it outright fails at. There are some great setpieces (particularly the drawings of outdoor skylines) and some memorable moments, but an adherence to a by-the-numbers story that can’t stray too far from the game universe exposes its limitations.

I don't know if I'd recommend Deus Ex Universe: Children's Crusade to anyone outside of those who have already played through both games.