Fans of the Alien franchise have taken a real beating over the years. Gearbox, creators of the massively successful Borderlands series, seemed like a shoe-in to do a great job on an Aliens game. Randy Pitchford, the Gearbox head, enthused at past E3s about the legacy of the series and how they wanted to do it right. In the end, Gearbox either lied, was deluded, or simply couldn’t devote the resources to a game outside of Borderlands, but didn’t have the guts to admit it when they made that realization. Whatever the cause, Aliens: Colonial Marines was a huge disappointment to Alien fans. So it’s no wonder that everyone was skeptical when Creative Assembly, a company best known for strategy games, said they were making a first person horror game based on Alien. Fans can be forgiven for thinking this would be another catastrophic disappointment. They’d also be happily wrong.

Amanda Ripley is the daughter of Ellen Ripley, the famous heroine of the Alien movies. 15 years after the events of the first Alien film, Amanda is now an engineer with the Weyland-Yutani corporation.  When a company rep informs her that the flight recorder of her mother’s missing ship has been recovered at a backwater space station, Amanda is invited to join the retrieval team for some much needed closure. Instead, on arrival, she’s greeted with a space station in anarchy and the infamous Alien slaughtering people wherever it can. Now she and her teammates are caught up in the fight against other survivors and, of course, the eponymous alien itself. For people worried about how Creative Assembly was going to handle the continuity gymnastics required to get Ellen Ripley’s daughter to face off against an alien, this is a good news/bad news scenario. The good news is, Amanda Ripley’s alien encounter and the rationale for why one of these creatures is on the rampage smacks of decent logic, and makes sense. The bad news is they don’t address the ramifications of a witness to an alien encounter and why the Weyland-Yutani corporation let their bio-weapons ambitions languish for another 42 years until the original Ripley makes her return. Still, as far as plots for a story in the Alien franchise go, this is certainly no worse than the worst entries in the film series.

Graphically, this game is a knock out. The PS4 version we reviewed had a solid 30 frames per second, no screen tearing, and gorgeous real time lighting. It was only during cutscenes that there were VERY noticeable framerate dips and lip synching issues, but during gameplay everything was smooth. The art team has to be commended for what is some frighteningly obsessive attention to detail. They took all the sets from the Nostromo in the 1979 Alien film, and applied that modular, industrial, retro-70s-future to Sevastopol station. CRT monochrome computers are in abundance, typical 70s typeface and graphic design adorn illustrated posters, and everything in the world smacks of a future where the digital revolution didn’t occur and big, clunky analog machines got tougher, faster and more advanced. There are plenty of joysticks, but not a single mouse or mouse pad in sight.

Then there’s the audio, which really deserves to come forward and take a bow. While the voice acting is competent, the sound design is brilliant. It’s absolutely crucial to play the game with either a decent pair of headphones or a surround sound theater system to appreciate how immersive the soundstage is. Strains of Jerry Goldsmith’s original Alien score are invoked at appropriately gloomy or spooky moments, while the clicks of old, mechanical computers and the opening and closing of iris vent covers are taken straight from the iconic sound effects of the original film. The most impressive thing the sound does, however, is become absolutely critical to your survival. Whether it’s the “ping” of the motion detector indicating you really need to stop and look at it, like right now, or the thumps the alien makes as it scuttles over you through the ventilation ducts, the soundstage of Alien: Isolation is a master class in directional audio.

Aliens: Colonial Marines was a first person shooter that threw hordes of mindless disposable aliens at typical, near invincible FPS military heroes, with practically unlimited amounts of ammunition. Alien: Isolation is a first person horror game with only one intelligent, nigh invulnerable alien that is constantly hunting a physically outmatched, but incredibly resourceful female heroine. You can tell already which game ended up being truer to the franchise, despite both Gearbox and Creative Assembly promising to respect the legacy. Players need to understand that Alien: Isolation is a horror game, not an FPS. Call of Duty fans should steer clear of this game as they’ll undoubtedly judge it “broken” or “buggy,” because there isn’t enough ammunition, the player feels powerless instead of powerful, and the main character is a strong female, rather than a generic male soldier. In other words, this is about as far from a COD experience as you can possibly get.

The entire game is based primarily on stealth and exploration. As Amanda Ripley, the player has access to engineering skills, and is able to quickly improvise or acquire many tools and weapons to survive the ordeal. The alien itself can shrug off the kinds of weapons found on the station, so players are constantly engaged in a cat & mouse game with lethal consequences. Aside from the alien, there are humans of varying motives to deal with, and androids that, unsurprisingly, are on a murderous killing spree. In this way, Creative Assembly manages to add quite a bit of variety to the game as players can use various weapons to distract or kill non-alien foes, or simply use the tools to lure the alien into lethal encounters with other opposing forces.

Tension is basic currency of Alien: Isolation. The game wants to make you nervous and uncomfortable and succeeds in a variety of ways. Being forced to run and hide from the alien is obviously nerve wracking, but this gets exacerbated by fiendishly sadistic old school game conceits. Players, for example, can’t save anywhere at any time, and are forced to use save terminals that, once used, are inactive for a couple of minutes. Some terminals and doors will require hacking or torches to gain access, and, once again, it’s sweat inducing to frantically play a hacking mini-game while an alien or killer android is just down the hall, trying to decide whether to come your way or not.

That decision making is probably Isolation’s single, greatest strength. The artificial intelligence of the alien actively hunts the player. There’s no set patrol routes, there’s no sequence of actions a player can memorise to safely stay clear of the alien. Players are required to be mindful of their surroundings, act like prey, not a predator, and rely on a little luck sometimes to get through. It makes for a stressful, nerve-wracking affair, but in that good horror way, rather than the frustrating “this game is badly made” way. It’s a long game, clocking in at 15-20 hours depending on your skill or luck. This does make the game feel a tad repetitive during tougher sequences, and kills the momentum somewhat, but once those more difficult obstacles are overcome, the game sails along with unrelenting tension.

Isolation makes you feel like you’re in the first Alien movie, and that’s something that no game based on the franchise has achieved. After years of fans just wanting that familiar, uncomfortable feeling of being stalked by the ultimate predator Gearbox promised to nail the experience, and it was complete flop. Creative Assembly on the other hand, as hinted to players about what they hoped to achieve, and in their humility, they’ve done it. For fans of the Alien franchise this is a must buy. For fans of horror games, it’s the same. For everyone else, step out of your comfort zone of military shooters and see what it’s like to be the hunted instead of the hunter. It’s an experience you won’t forget. Alien: Isolation is to Alien fans what Arkham: Asylum was to Batman fans. For years the fanbase said there’s no such thing as a good game based on this property. Well, there is now.

Whatever the cause, Aliens: Colonial Marines was a huge disappointment to Alien fans.

File Under: Alien, Horror, PlayStation, Sega
A retail version of the game reviewed was provided by the publisher. You can read more about CGMagazine reivew policies here. 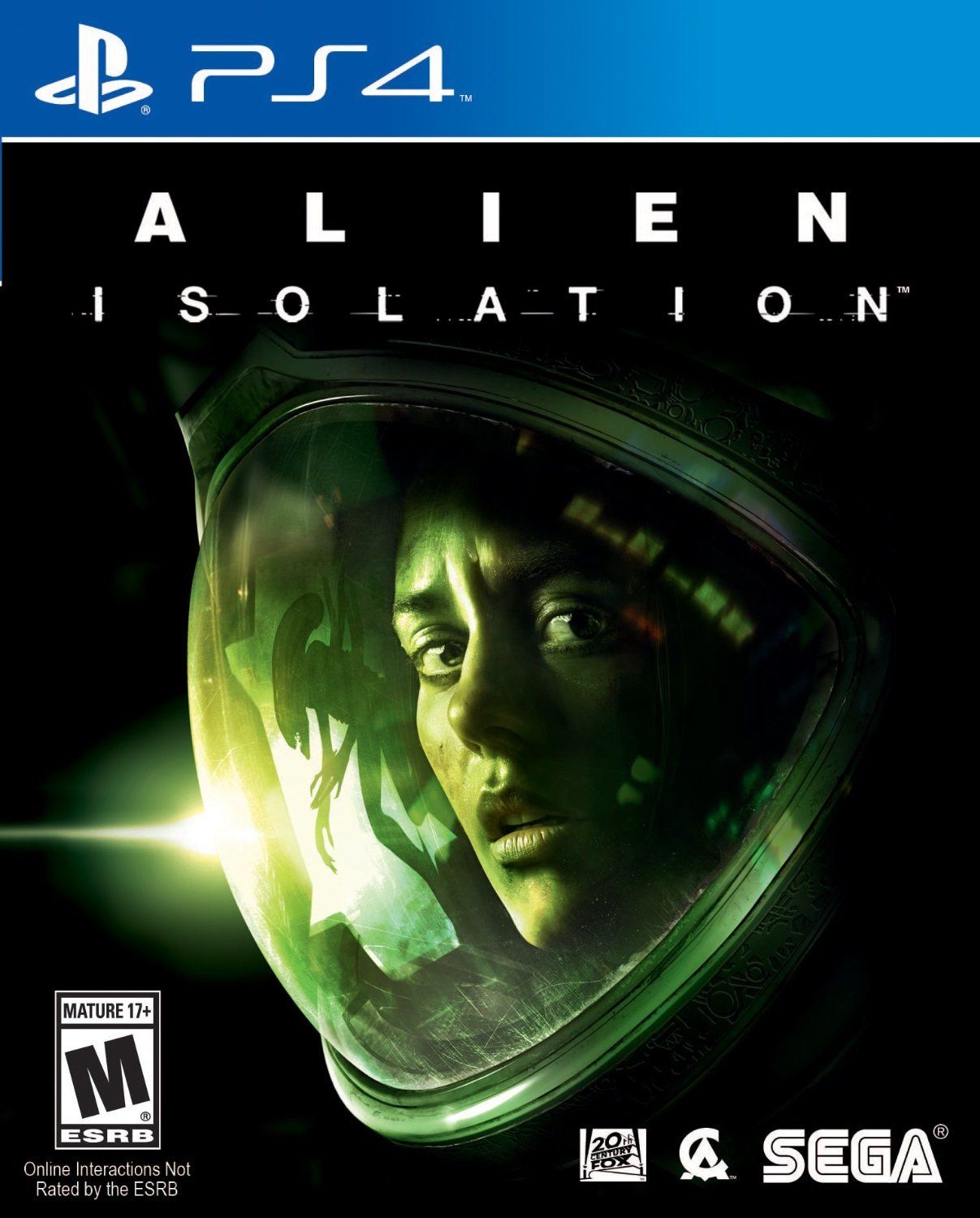