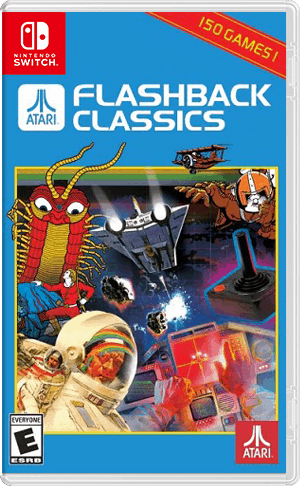 Atari Flashback Classics, for sheer numbers, puts many game collections to shame. Getting one-hundred-and-fifty titles in one place makes for a staggering offering across Atari’s early arcade, 2600, and 5200 consoles. It’s a fantastic chunk of the history of video games, especially with its complete manual scans and box art. It’s a lovely collection, although your interest in the history of games, or feelings of nostalgia towards Atari, may colour just how much you enjoy it.

It’s hard to deny the appeal of the wealth of content in Atari Flashback Classics. From space battles to commanding complex missions to racing firetrucks through town, there is simply a lot to do no matter what mood strikes you.

While this huge offering might seem to put many of the more modest collections to shame, the brevity and simplicity of many of these titles almost makes it a necessity to have so many. Many of these Atari titles offer straightforward play that, while demanding if you’re aiming for high scores, aren’t especially compelling. Playing Pong or Saboteur will challenge players, for sure, but they get old in a hurry. As bite-sized experiences, they are fun, but these games feel much better suited to short play sessions of multiple games. As such, it only makes sense to have so many in one place, as the games aren’t appealing enough without having so many.

The choice of games does offer many interesting, if brief, adventures to be had. The arcade game Tempest, which tasks you with circling around an arena and firing shots down aisles of dark blue light, gives an incredible sense of depth for the era, especially as players move to new stages. Haunted House and Return to Haunted House offer some surprising chills despite the inherent silliness of their visual style. The Swordquest series gives a glimpse into the early days of adventure as well, albeit with some limitations that are hard to ignore. Beyond them, there’s also Asteroids, Missile Command, Yar’s Revenge, and many other classics that had to be in there.

Some extremely ambitious titles are also present in Atari Flashback Classics. Stellar Track is a text and tactics title where players must check maps and their scanners to find alien ships to destroy. It’s challenging to work within the text interface, but captures the sense of watching monitors on a space ship as you try to ‘see’ your foes. Return to Haunted House also shows some sharp exploration into how to make a horror game with limited visual abilities, using enemy speed and limited line of sight in interesting ways.

With some surprising depth in play, it’s handy that the Atari Flashback Classics includes scans of each of the game’s manuals. There are many, many games within the collection that don’t make a whole lot of sense (especially given some of the console toggles you can play with for many games) without taking a look through these manuals. It’s nice to have all of this information at-hand, and equally pleasant that you can leaf through these often-lost booklets as well.

The box scans and pictures of the arcade cabinets also make for a wonderful addition, completing the artwork for each game. It’s a great touch, and helps capture that old feeling of wonder Atari game covers used to convey. They had to do a lot of the imagination heavy lifting given the visual limitations of the time, so playing these games without their covers just wouldn’t be the same.

The Atari Flashback Classics collection adds some new things to draw players in as well. Many of its multiplayer games can be played online, letting players seek out online opponents if there’s nobody home (plus it’s wild to be able to play Pong online). There are also achievements that encourage players to try new things and challenge themselves.

That said, many of these games still aren’t much fun without an interest in the history of games or a sense of nostalgia for them. As said before, they’re often brief or too overly-simple to keep someone playing them for long, and those that do try more interesting things are still highly limited by what the consoles and arcade could do at the time.

Your tolerance for the visual style of the era will go a long way in how much you can enjoy Atari Flashback Classics as well. Many of the games are muddy and dark, or features characters and locations that will require you to really work that imagination hard. While there are some outliers that do look quite nice, this collection captures an ugly time in video game visuals, and it can be quite hard to overlook.

It doesn’t help that some of the game’s control styles don’t work very well. Atari Flashback Classics features some touch screen play and standard control styles players can use, and while these are fine for the most part, some of them can be quite imprecise. Most of the driving games control miserably, with the wheel seeming to have a mind of its own. Red Baron’s flight feels needlessly awkward and hard-to-control. Even guiding your character in Tempest seems needlessly touchy if you use the thumb stick instead of the directional buttons, making for some unnecessary frustrations.

For video game history buffs or those with pleasant memories of Atari’s titles, Atari Flashback Classics offers a ton of good times. It’s undeniably an important look back at some of the founding years in games, and helps show just how far we’ve grown, as an industry, in a short time. That said, with some finicky controls, stark visuals, and far-too-simple gameplay, few of these titles may offer much appeal to anyone not interested in history or replaying memories.

Atari Flashback Classics offers a vast look back into the history of an important time in games, but may offer little of interest to those without nostalgic feelings for it.
REVIEW SCORE
6.5
File Under: Atari, Nintendo Switch