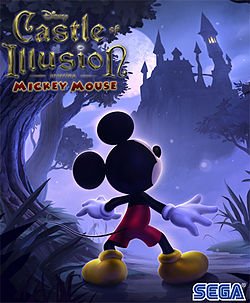 Sega has put together yet another re-imagined version of a game previously released over two decades ago, and this time that game is Disney’s Castle of Illusion starring Mickey Mouse. Hot on the heels of another Disney-related game, Duck ales Remastered, this re-imagined game puts players in control of the famous Disney character Mickey Mouse, on a quest to rescue Minnie Mouse.

The game is a classic side-scrolling adventure game, with sharp graphics, on-point voice work, and an intriguing and enjoyable level design. The game really evokes thoughts of a simpler time, as you go through the various levels in the castle of illusion to collect playing cards, gems and statue pieces, so that you can unlock the various rooms in the castle, and eventually assemble a bridge to where Minnie is being held.

Each level is comprised of three stages, the first two are your standard side-scrolling adventure stages, where you have to survive the level, pick up gems, and vanquish the enemy illusions, and the third stage pits Mickey against a level boss. The levels are all themed, and the graphics are quite bright and spritely. The game is quite attractive looking, the music is themed nicely with the level design, and the game is a fun and challenging side-scrolling adventure. The game is challenging without being unforgiving and has a fair bit of re-playability throughout. There are tons of different collectibles to pick up, from gems to statue pieces to playing cards to peppers, and the trophies and achievements are contingent upon playing the game enough to collect all of these items. The game has a nice variety to the level design, to keep the player interested in playing further without the game ever feeling redundant or repetitive.

I haven’t played the original Sega release myself, so I’m unsure of just how much of a reinvention this game is, but playing this new version makes me interested in going back and checking it out. I can only hope that more old Disney-related video game properties will get dusted off and given fresh new iterations and remastered versions, and that future is likely going to depend on the success of games like this and the aforementioned Duck Tales: Remastered.  Thankfully, both of these games so far have been extremely enjoyable, entertaining remastered/re-envisioned versions of prior games, and bode well for future re-imaginings to come.  Highly Recommended!

"The game is a classic side-scrolling adventure game, with sharp graphics, on-point voice work, and an intriguing and enjoyable level design."
REVIEW SCORE
9
File Under: Disney