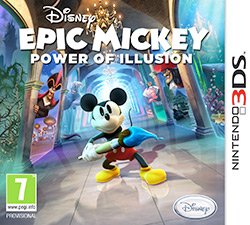 With freshly pressed discs of Epic Mickey 2 currently spinning in every platform known to man, Mickey’s first side-scrolling platformer since the ancient 16-bit days has slipped onto shelves with little notice. Since it’s also got Epic Mickey in the title, I’m sure most people assume that it’s a 3DS port. Well, not so fast folks. You are severely underestimating what the good people at DreamRift have whipped up for us. While this game puts a magic paintbrush into the little mouse’s hands, more than anything else this is a throwback to the beloved Sega Genesis classic Castle Of Illusion. The designers nimbly mixed together elements from Mickey’s two most prominent video game outings in a product dripping with fan service and Disney references. Playing the game will instantly transport the most jaded of gamers back to a simpler time when Disney magic still had some impact on their now shriveled Grinch hearts. It’s a must play for anyone who has a 3DS and a childhood marked by the Disney empire. Unfortunately it feels like this game may have been rushed to shelves to come out alongside its console brother, which is a shame and a missed opportunity. Epic Mickey: Power Of Illusion comes oh-so-close to being one of the top 3DS games of the year, but instead is merely a strong Christmas release for Disney craving children of all ages. I suppose that’ll have to do for now….sigh…

The first thing you’ll notice when playing the game (and what demands the most praise) is the absolutely beautiful aesthetic the designers created that is guaranteed to make old school gamers giggle with childish glee. This was clearly a product made by designers who hold Castle Of Illusion close to their hearts. They’ve whipped up some gorgeous painted backgrounds and hand drawn sprites for all of the characters that revives a lost gaming art. If you grew up playing Castle Of Illusion or the fantastic Disney-approved Aladdin and Lion King games, this sucker will feel like stepping into a time warp. Disney was responsible for possibly the finest licensed games of that era, with designers approximating the house of mouse style as close as 16-bit processors would allow. Power Of Illusion takes those designs and uses modern processors to push it a step further. This is as close as we’ve ever come to playing within an accurately designed 2D Disney world and the concept fills the screen with lovingly designed characters from classic films like Peter Pan, Beauty And The Beast, Aladdin, and others. The backgrounds lose no detail whatsoever, with the main action popping off it vividly in 3D. The game demands to be played for the visuals alone and thankfully, the gameplay is strong enough to make it more than just an exercise in style.

So, you’ll play as Mickey (obviously) and face off against the finest green-faced Disney villain of them all: Mizrabel. That lady has clearly been up to no good in the 22 years since the Castle Of Illusion and has once again kidnapped many of Mickey’s Disney buddies. So you’re forced to pick up your magic paintbrush and dive into her…er…castle of illusion to fight your way through some recognizable worlds and save all your buddies. The controls are simple and easy to master. You can jump on enemies, smash them with a spin attack, or fling paint/paint-thinner at them. You can also use your super-duper special paintbrush to create and erase items within the game. It all works pretty well and even though Mickey moves far slower than your average platforming hero, the game’s rhythm picks up as you play on. Sadly, you won’t play for very long though. There are only 3 worlds in the game with about 3-4 levels each and you’ll face a grand total of 3 bosses before the game is complete. There are also bonus quests involving finding Disney characters and having them exchange items, but this felt like padding to me. The whole thing will be over in about 4 hours or so and even then I feel like the playtime easily could have been chopped in half in Mickey moved at a decent speed and all of the useless side-quests got the axe.

So, there’s your major problem with Power Of Illusion. For a retail title, this game is ridiculously short. Even an extra world would have made the experience more satisfying and I can’t help but feel this game was dramatically shortened from the designer’s original ambitions to meet a pre-determined release window. That’s really a shame, because the game is undeniably beautiful and even quite challenging as you near the end. Still, what there is to play is so gosh darn good that it has to be recommended. This is a fantastic piece of work. It’s just so short that it might not be worth the full retail price for everyone. As a $30 download exclusive or with an extra 5 levels or so, this would be an instant 3DS classic. Instead, it’s a beautifully constructed above-average experience. Now, if you’re a Disney fanatic, that won’t matter as much. You’ll be playing through this game several times with drool spilling from your mouth. For everyone else, it might be worth waiting until you find a used copy or the eShop download price is lowered to a more reasonable level. Don’t get me wrong, this is an impossible game to hate (you get to see Scrooge McDuck pogo-stick on his cane like the old NES DuckTales for God’s sake!). However, given everything the game does right, the low level of content is definitely a disappointment. Ah well, at least fans of Castle Of Illusion finally got the follow up they’ve dreamed of for decades and all of the groundwork has been laid for an amazing sequel. Let’s just hope this light offering is successful enough for Disney Interactive to commission round 2. For all of its strengths, Epic Mickey: Power Of Illusion deserves a little more care and content than this and I find it hard to believe this will be the end of the line for that squeaky voiced icon on the 3DS.

For all of its strengths, Epic Mickey: Power Of Illusion deserves a little more care and content than this and I find it hard to believe this will be the end of the line for that squeaky voiced icon on the 3DS.
REVIEW SCORE
8
File Under: Disney, Epic Mickey, Nintendo, Nintendo 3DS, Video Game