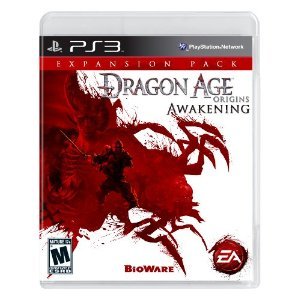 Dragon Age: Origins came out towards the end of last, with much fanfare and critical acclaim. It was a return to the high-fantasy roots that garnered BioWare so much respect as a PC developer For strictly console gamers it showed that the Edmonton developer could go beyond the science fiction trappings of Knights of the Old Republic and Mass Effect serie Once again, BioWare invites gamers to strap on sword and shield for an expansion pack to the award winning fantasy RPG.

It’s difficult to talk about the story in Awakenings for a number of reasons, one being that it would entail giving away some of the plot of the previous game, the other being that some minor elements will vary somewhat based on decisions players made in the previous game. Players have the option of starting a fresh new character, a Grey Warden from the neighbouring nation of Orlais, or import their old character from Dragon Age: Origins into this new expansion. Players importing their old character should take note that loot acquired from DLC such as Warden’s Keep or The Stone Prisoner will not carry over, so players attached to that helmet of Honnleath will have to find alternative The plot largely concerns itself with the fragmented Darkspawn, the villainous army of the first game. Having suffered defeat in Dragon Age: Origins the accepted historical convention thus far has been that even with a massed army, they should now retreat back underground until they have a new leader. This time, it’s not happening, and everyone wants to know why. The player either as the new kid from Orlais or the returning Hero of Ferelden, gets to the bottom of these event

The technical aspects of Dragon Age: Awakenings show no change whatsoever. This is the exact same engine and mechanics that were used for the first game, right down to chugging frame rates and some occasional sound drop out It’s obvious that while enormous care was taken with the story, the constraints of time have let a few bugs slip through, such as journal entries that are blank, and sound mix problems during fights where the grunts of the enemies drown out the clashing of swords and hurling of fireballs, and most serious of all, errors in quests that sometimes prevent completion. The engine is solid and functional but shows a lack of polish.

This latest expansion does not have the same scope of the original Dragon Age; whereas, the first had players roaming the entire country of Ferelden for anywhere from 60 to over 100 hours of gameplay, Awakenings can be done in about 30 hours or les The action takes place entirely in a region of Ferelden known as Amaranthine, at a much faster pace. The opening of the game will find the player saddled with an overwhelming number of quests in less than two hours, and it quickly spirals upwards as exploration into neighbouring towns and countryside begin

The mechanics of Dragon Age: Origins have not changed in the slightest. Combat still plays out exactly as before. It’s actually slightly easier even on the normal difficulty since players already start out at a higher level, particularly with an imported character. Non-player characters in the party can still be interacted with to raise or lower their approval rating based on player decisions, and there’s plenty of loot to be had. On that note, what is different here are that romances are entirely absent, so there are no Byzantine relationship dynamics to navigate for the more soap opera-motivated gamer The items have also had a revamp, with a vast array of high-tier weapons, armour and accessories to use.

Dragon Age: Origins – Awakenings is an easy game to recommend. It can only be used by gamers who have already played the first game, and anyone who loved the first game will be ready for more. Bioware has created exactly what players want, giving more adventures, more characters, more story and more insight into the world of Ferelden. The only major criticism of the expansion pack is noticeable level of minor bugs present, but it’s always possible for a patch to address those issue Otherwise, Awakenings plays it safe by giving gamers more of the same in a smaller, higher-level package.