You are playing as Evil itself: a dungeon lord tasked with cleansing the world of any happiness or do-gooders while also managing a slew of snotty goblins, orcs, and other vile creatures. Dungeons 2’s prologue starts off with you being banished to the underworld after being defeated by a vicious army of men, and you must take back all you’ve lost Build and discover massive territories, and amass an unstoppable army; this is where your journey begins.

Much like its predecessor, Dungeons 2 is heavily inspired by the timeless Dungeon Keeper games. You have full control of the dungeon lord’s hand, allowing you to pick up your minions, identify areas to dig and build in and, when it’s called for, slap your little minions around. You’re a powerful entity, but that power comes with the responsibility of managing armies and keeping your newfound territories safe. This will likely sound familiar to Dungeon Keeper fans, and that’s because Dungeons 2 blatantly copies most of that series’ core mechanics and concepts. This isn’t the first time a real-time strategy game has attempted this, but luckily Dungeons 2 pulls off the feat of being a successful, upgraded version of Dungeon Keeper while also offering a few new additions. 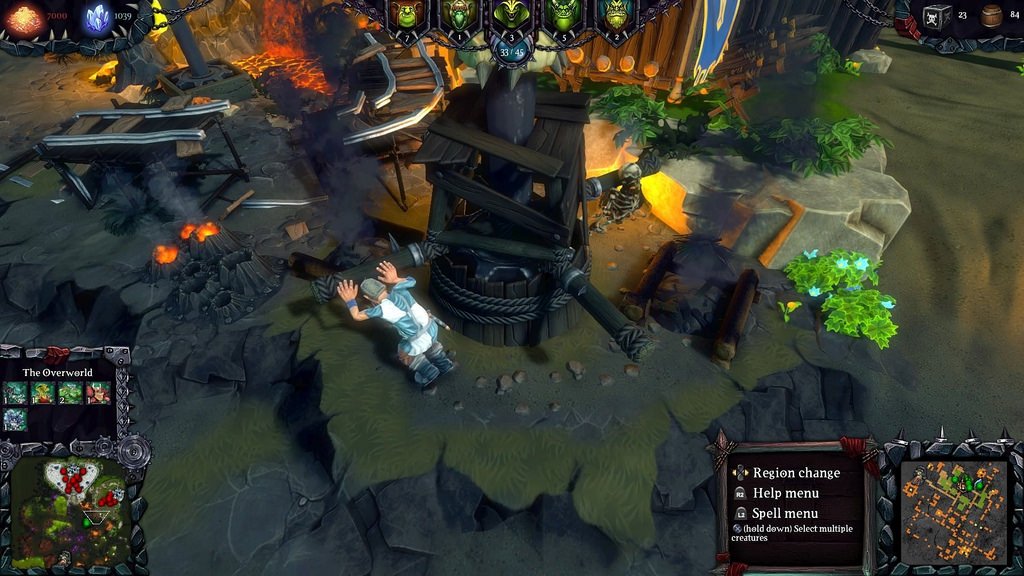 There are essentially two halves to Dungeons 2. The sim-dungeon half is where you focus on creating traps, collecting mana, researching spells, and building. The second half consists of real-time strategy elements that take place in the overworld areas. You take direct control of your army, directing your minions to sling spells whilst managing the economy in the underworld at the same time. The gameplay isn’t anything spectacular, but there’s plenty of satisfaction to be found with all the micromanaging you’ll be doing. It’s enjoyable to constantly build and destroy, and I love the idea of playing as a baddie who only wants to cause some havoc.

You progress in linear fashion, as the game introduces new core dungeon features in a relatively slow time. It can be dull, but that’s to be expected. The campaign also features a nonsensical plot, and humour that doesn’t always work. The multiplayer emphasizes handling both the underworld and overworld areas, forcing you to think on your feet. Online gameplay is a lot more exciting and involved than the campaign, as players can skip building up a higher-tier dungeon in certain modes, and there are different and interesting ways to win. The game features a few playable factions, with the main ones being the orc-style Horde and the vile Demons. The Horde requires less micromanagement, while the Demons play the long game, providing you with plenty of upsides if you can handle the more frenetic management pace.

While Dungeons 2 doesn’t offer anything groundbreaking in the world of RTS games, managing two different gameplay areas can be both challenging and fun.. It plays similarly to classics like Dungeon Keeper, and some of its forced humour and boring plot could definitely use a bit of work. But those looking for an old-school experience with some modern changes, look no further.

Dungeons 2 isn’t all that original, but its classic Dungeon Keepers roots makes for an enjoyable RTS game.
REVIEW SCORE
7.5
File Under: