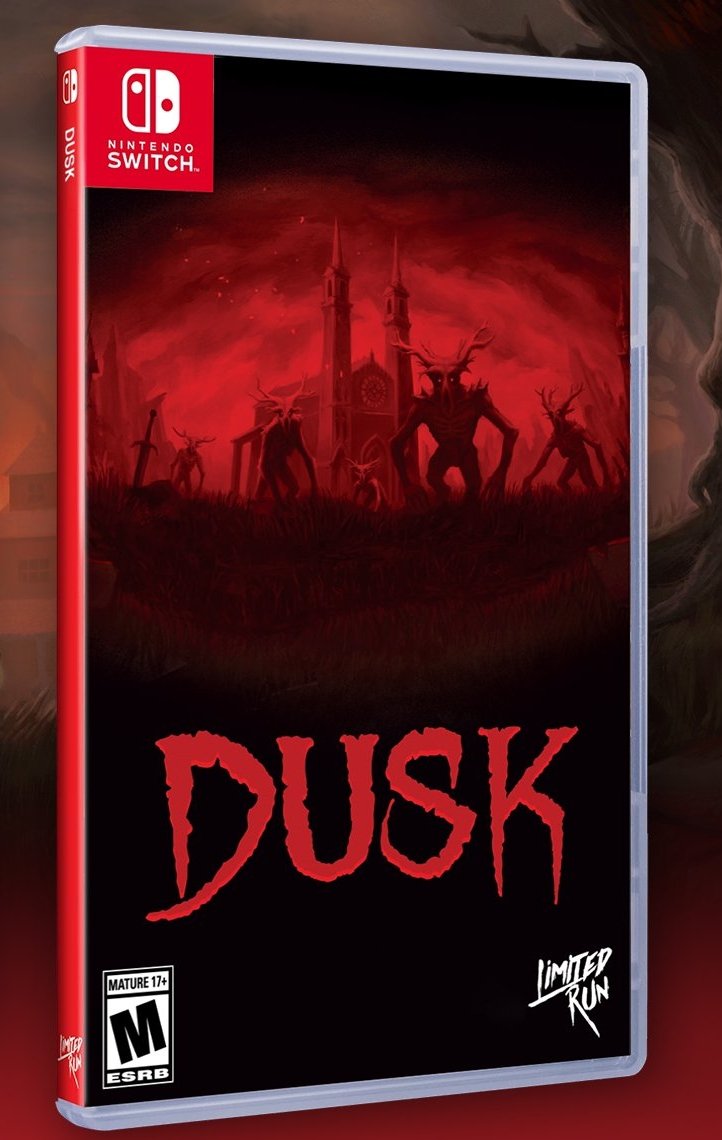 Just because October is over, doesn’t mean we still can’t enjoy some spooky fun before Christmas!  Originally released in 2018, DUSK made a name for itself by invoking the art-style and gameplay of PC classics like DOOM and Quake, while still carving out an identity all its own. Now it’s found its way onto the Nintendo Switch, and it—much like the 2016 DOOM before it—it’s so unbelievably fun to rip and tear on the go.

I’m going to keep this short and sweet, because DUSK doesn’t have time for flowery formulation. DUSK is here to kick ass and chew bubblegum, and you better believe it’s all out of gum. Set in the fictional town of Dusk, Pennsylvania, some Lovecraft-ian runes are discovered under a stretch of farmland which attracts the attention of the military and scientists who inevitably become possessed by demons while attempting to research them.

Players take on the role of a nameless treasure hunter—colloquially referred to as DuskDude, or The Intruder—and it’s up to them to blow holes in every cultist, soldier, chainsaw man, shotgun wielding scarecrow, and all other manner of hell-beast, until they get to the bottom of what’s really going on.

DUSK is a fast-paced, nonstop rollercoaster of action and gunfire that definitely evokes the spirit of classic 90s FPS like DOOM, Turok, or even Half-Life. Gameplay is incredibly tight, and runs incredibly well on the Switch, maintaining a consistent 60 FPS both on and off the dock. This is backed by a wide variety of weapons and enemy types that keeps the game fresh across a pretty packed game—10 decently sized levels across three episodes.

DUSK is a fast-paced, nonstop rollercoaster of action and gunfire that definitely evokes the spirit of classic 90s FPS like DOOM, Turok, or even Half-Life.

DUSK’s visuals are what really make it stand out, which is ironic given it’s going for a retro aesthetic. Styled intentionally to look like a low-poly PC shooter, enemies are blocky, foliage looks like paper, and the blood spurts in adorable little squares. Visually, DUSK is definitely most reminiscent of DOOM, leaning hard into the grungy, horror industrial style with a wide range of red, yellow and brown pixel environments.

That isn’t to say that DUSK is entirely a relic of the past. With a crystal clear 1080p while docked and a solid 720p on handheld, it really is an amazing blending of old and new. It showcases how the style of low-poly doesn’t need to be marred by the horrible artifacting of low resolution.

At the end of the day, DUSK is just good ol’ fashioned fun. It evokes that classic era of uncomplicated run-and-gun shooters that prioritize high-octane fun over the complex, objective-based military shooters of the modern day. Had this review been published in October, I would’ve said it would’ve made the perfect Halloween pair, but I can easily say DUSK is a great time, any time of the year.

DUSK is a bloody good time on Switch that perfectly evokes the spirit of the best 90’s shooters.
REVIEW SCORE
9
File Under: Nintendo Switch