The newest installment to the franchise is a jump scare blas 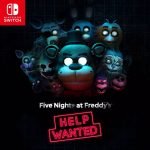 If the Nintendo Switch is the gift that keeps on giving, what it gives is a constant onslaught of old favourites made new for millennial video game fans that might not have driven headfirst into more complicated open-world games. And the newest gift is more of a pizza arcade prize, with the release of Five Night’s at Freddy’s: Help Wanted for the Switch.

The legendary franchise has grown from its crowdsourcing roots in 2014, though the bones of the game have remained the same. The player is the nighttime security guard for a pizza franchise (reminiscent of Chuck E. Cheese) who must ward off the animated characters who tend to violently stuff humans into costumes. Each level is one of said five nights and adds a new mechanic to the game for the security guard to manage in order to avoid an attack by a creepy fuzzy pal of Freddy’s. With each addition to the franchise, the mechanics are changed, though the theme and gameplay remain the sam; toggle through security cameras and keep track of which baddies are near and rattle through the ways to trick them into not recognizing you.

Switch’s release is the seventh in the canon and includes “collection of classic and original mini-games set in the Five Nights universe,” marked as “FNAF 1,” “FNAF 2,” FNAF 3,” Dark Rooms,” “Parts and Services,” “Vent Repair,” and “Night Terrors.” There’s also an option to flick a switch which changes the colours of the menu and appears to show some hidden levels. Perhaps someone who can stomach more of the scares can fill you in on that element of the gameplay. This appears to be a “nightmare mode,” where players can replay levels with increasing difficulty and scares.

The Switch release comes off the latest VR release, this one being “flat” and to make up for it, they’ve added a Switch controller “rumble” to assist with the jump scares.

The gameplay isn’t a revolutionary change from its predecessors, but it’s a total blast. Fun to play solo while in full panic for the eight or so minute rounds, I can imagine this would be an unbelievable game to play in a small group as you all shout and scream at each other, trying to spot the walking baddies and ultimately getting shrieked to a loss. Locked down, I couldn’t resist video chatting a friend to have her witness the whole disaster in real-time, the two of us screaming the entire way through. As a fan of horror games, and further, a fan of games that don’t require a massive commitment, this is an absolute treat to shove in short bouts of gameplay.

The original game being positioned for a computer keyboard lends really well to a switch controller. Using the arrow pads on the left side, the player toggles through the security cameras, and the right side and trigger buttons are to execute moves. There’s a bit of a control issue with precisely moving around the cursor using the joystick, but most of that can be circumvented with other buttons. It’s obvious from the gameplay that this would be out of control in VR and you can almost sense where the game is failing to live up to it. That said, the gameplay doesn’t suffer more than a couple awkward joystick problems if that’s your preferred way of viewing the area.

Having dumped a good amount of time into the game, I can easily call it “fun.” Maybe not the game I will tell all my friends to run out and buy, especially with the rise in multiplayer online games making for more dynamic gameplay, but for those of us who like to pop in an play a quick 20, or have something simple to play with a few friends over, FNAF:HW is fun as hell. I see myself returning to it for a long time, casually with friends or to kill brief blocks of time.  The intro to the game, positioning itself as a VR experience for which just has to agree to a brief release, is hilarious and sets the tone for a ridiculous game about evil animatronic killer characters at a pizza place denying any massacre liability. From a story telling standpoint, skipping the background in favour of “and now we closed the shop, and we swear nothing bad happened,” is brilliant, and I can’t help but admire how vivid a of a picture a 30 second introduction paints.

Ultimately, FNAF: Help Wanted is a fun, straight forward single player game that makes the case for games like it. It’s scary enough for fun screams, but manages to be subtle in the terror and storytelling, giving a lot with a little. At its reasonable price point, with a load of mini-games, I’d recommend it to anyone looking for something to do.

The straightforward short hit game style makes the case for itself and games like it. It’s not completely revolutionary, but it successfully adapts the PC to VR game to the console and makes for a good time.
REVIEW SCORE
8
File Under: Horror, Nintendo Switch