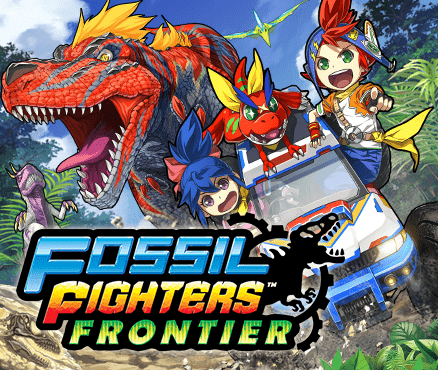 It only took about five minutes for me to realize Fossil Fighters Frontier is essentially a re-skinned Pokemon game trying hard to differentiate itself from Game Freak’s popular RPG. It takes place in a world not unlike Jurassic Park, tasks players with collecting fossils to reanimate “Vivisaurs” –its version of a dinosaur -, holds Vivisaur fights, and has a kind-of story involving other fossil hunters like yourself.

Is it a bad thing if it apes Pokemon at nearly every turn? Not necessarily; it does try to have unique takes on old ideas, and it admittedly does some interesting things. But it was difficult to sit and play it when I realized I would enjoy a Pokemon game so much more.
Fossil Fighters Frontier’s core is exploration. This is done using a bone buggy, a colorful jeep payers can drive around different sections of the park. Using a sonar-like pulse, the car can help locate the position of key fossils that players can then “dig” up through a quick mini-game.

This approach to exploration was relatively well done. The world is well-realized, and while it wasn’t the most harrowing of tasks to uncover a fossil, I still felt some satisfaction when the sonar pulse returned a result on my second-screen mini-map. A bright, colorful, and inviting world filled with knock-off dinosaurs is definitely not the most boring thing I’ve ever seen.

Once these fossils have been successfully recovered, the player can then resurrect its corresponding Vivisaur, which can later be implemented in battle against other Vivisaurs using an incredibly confusing and convoluted turn-based battle system. Rather than the clean-cut UI implemented in turn-based games today, this one came across as supremely complicated and bogged down by myriad options that are never explained particularly well.
In another effort to differ itself from Pokemon, Fossil Fighters adds in multiple layers to Vivisaur combat beyond elemental typing. In theory, this could work well. But, a lack of concise, specific explanation and application instead leaves it a fuddled mess.

Fossil Fighters Frontier is very much a game targeted at children. There’s nothing inherently wrong with the idea of making a game suitable for younger players, but it feels like the core conceit of it is “Kids are dumb. Can they understand this? Is this too hard? Let’s make it easier and more repetitive.” Leveling is extremely grind-y, the humor is completely juvenile, and the gameplay loop circles itself so many times that it becomes uninteresting very, very quickly.
Games made with children in mind don’t have to be over-simplified and insultingly easy. Minecraft is a perfect example of a game targeted towards children that isn’t in any way “dumbed down” for younger minds. In fact, it’s almost the exact opposite. It offers a great deal of possibility by being basic in its construction, and encourages children to use their intellect rather than insulting it.

Fossil Fighters is essentially a younger brother looking up to an older one; it clearly admires everything Pokemon does and tries to emulate it in every way possible, but never manages to do so in any clever or inventive ways. Sure, it has its own approach to different aspects of itself and even has glimmers of interesting ideas, but they’re mostly undercut by its insistence on being iterative rather than innovative. As a result, it feels generic and half-baked, a game not easily recommendable to children of any age.

Fossil Fighters Frontier’s core is exploration. This is done using a bone buggy, a colorful jeep payers can drive around different sections of the park.
REVIEW SCORE
4
File Under: Nintendo, Nintendo 3DS, Pokémon