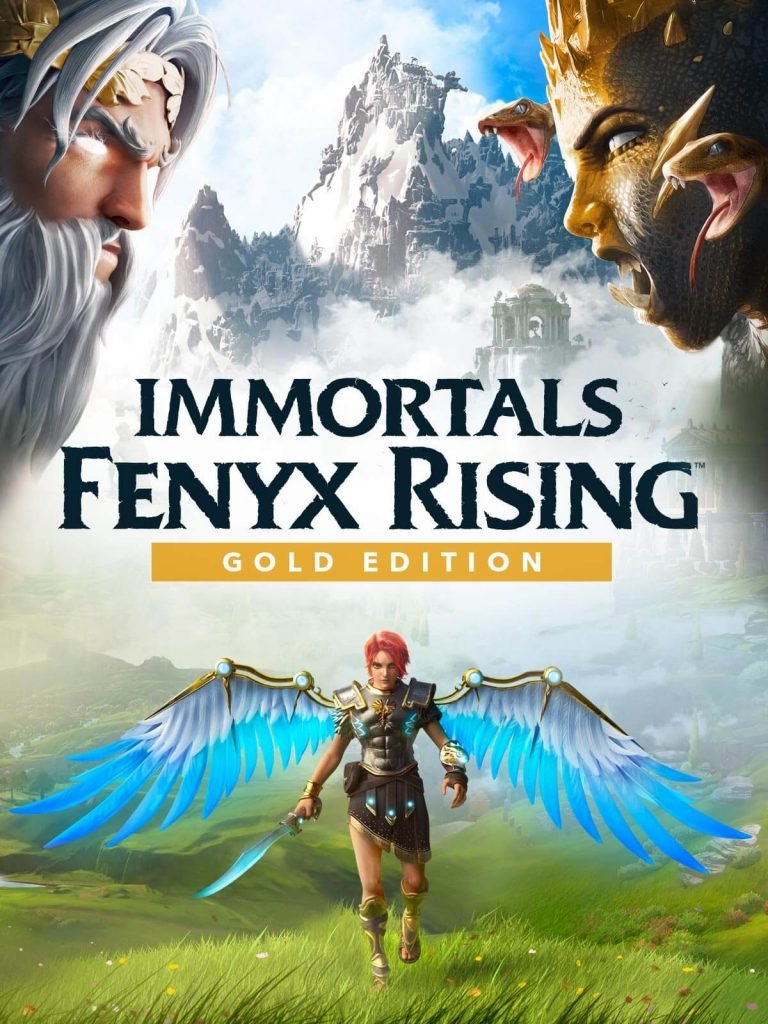 Immortals Fenyx Rising is a competently made video game. The world is colourful, the combat is simple and functional, and I encountered only a few bugs in the 25 hours it took for me to complete it. At the very least, it works properly. That is faint praise, but it is the only praise I can give to a game that is as joyless as this. Immortals is devoid of life and imagination, content to take elements from better games, including games that Ubisoft itself designed, and turn them into worse imitations.

The Greek mythology inspired Immortals follows Fenyx, a young customizable character who is stranded on the mythical Golden Isle due to an accident. There, they must rescue several Greek gods from the hand of the titan Typhon, who has escaped his prison and who looks like a generic demon that could be found in any number of video games. The story is narrated by Prometheus and Zeus, the former acting as the straight man to the latter’s petulant and humorous tangents.

I say humorous, but I found the game’s attempt at lightheartedness to be grating instead. Each and every conversation between the narrators will feature a joke, and they occur with such frequency that they become tiresome. As an example, here is a line of dialogue between the two that occurs as Fenyx is climbing a statue of Athena that is only slightly paraphrased:

Zeus: She should have inspired them to create an elevator!

That is a particularly bad example, but that tone is consistent throughout the events of the story. I found each and every character, from Fenyx themselves to Hermes and beyond, to be annoying and unlikeable because a line rarely goes by without someone setting up a joke or pun. It’s as if everyone in Immortals is a second or two away from turning towards the camera and winking. After only a few hours, it becomes exhausting.

At least the world is pretty to look at. The Golden Isle is vibrantly coloured, with seven different colour coded biomes to traverse and climb. Yet despite the art style, the world may as well be painted in greyscale because that colour does not make up for how overstuffed it. Dozens upon dozens of treasure chests, collectibles, puzzles, dungeons, and the occasional quest dot the landscape, but there is no space on the island for anything to breathe or merely exist. It’s as if there was a fear that any empty space would cause players to become bored. In practice, the opposite becomes true. Every activity becomes tedious because it repeats so frequently. And when you see the same things repeat albeit with minor variations, the Golden Isle becomes suffocating, feeling far smaller than its actual size.

The tedium of the activities on the island is exacerbated by the pitiful nature of the rewards received for completing them. Take a Fresco challenge as an example. These require you to arrange four stone blocks to form an image. The layout for each of these puzzles is exactly the same each time, with no real variation. The reward is always the same – a couple of coins that can be used to purchase abilities and upgrades. No matter what activity you take part in, the reward is identical to previous versions of the same activity.

In isolation, that isn’t a bad thing. But what you purchase and upgrade using those rewards is practically meaningless. Health, stamina, and equipment improvements merely add another bar to their overall capacity or increase the flat numbers a weapon or piece of armor has. And the skills you unlock with the aforementioned coins are uninspiring; there are a small selection of combat abilities to unlock, along with a number of skills that are neat, but don’t add a lot to your gameplay capabilities. Not once did I unlock something and experience a sense of growth, because the most important thing I ever received was additional health bars so that I wouldn’t die in a single hit from powerful monsters.

The combat in Immortals is boring. It is similar to the combat found in Assassin’s Creed Odyssey, except it is completely lacking in impact. It is as if the weapons are toys, lacking any weight behind them no matter their appearance. When I hit anything with a sword or axe, there is no sense that I have dealt damage to an enemy beyond the health bar going down. The bow may as well be a tool exclusively used for solving puzzles, because it does not feel good to use in battle. At least when I shoot something with a bow in Assassin’s Creed, it staggers or otherwise shows a reaction to being hit. The previously mentioned abilities that are used in combat similarly don’t feel good to use. They look cool, but because they aren’t as effective as merely mashing a light or heavy attack, there is little reason to make use of them. There is no reason to not repeatedly mash enemies with basic combos, because everything else merely causes the damage sponge enemies to live longer.

Special mention must be made of the boss fights, which are unexciting and simplistic to a depressing degree. Humanoid bosses feature the three to four attack patterns that are used in the exact same order repeatedly. Monstrous bosses don’t feel dangerous, and often go down at the same pace as their normal counterparts. The final boss, in particular, is disappointing – I merely grappled it, which was enough to avoid all of its attacks, and spammed a light attack again and again in order to defeat it. It took 10 minutes.

Much has been made of Immortals’ similarities to The Legend of Zelda: Breath of the Wild. You can climb almost anything in both games, and both feature a glider you can use to slowly travel through the air or catch wind currents with. Their implementation in Immortals Fenyx Rising is inoffensive, in that neither improves or worsens the already bland exploration that is present in the game.

“Their implementation in Immortals Fenyx Rising is inoffensive, in that neither improves or worsens the already bland exploration that is present in the game.”

The more interesting comparison lies in Immortals’ use of Vaults. In lieu of the shrines found in Breath of the Wild, Immortals has Vaults that serve a similar purpose. Each is either a combat test or an environmental puzzle, takes place in an area separate from the world map, has a stat upgrading item at the end, and a hidden chest or two with minor rewards. I enjoy completing shrines in Breath of the Wild, but Vaults are among the most tedious activities in Immortals for one major reason: They take far too long. Shrines in Breath of the Wild take, on average, a few minutes to complete and usually feature a single puzzle to solve or a single enemy to defeat. Vaults, on the other hand, almost always feature multiple puzzles or multiple waves of enemies to fight against. Some of the mandatory Vaults take upwards of half an hour to complete. Yet because the reward for completing a shrine and a Vault is the same, the latter feels much more tiresome.

One Vault in particular has stayed in my mind. It featured a pinball minigame, where you pressed two switches to control the flippers as you aimed to light the ball on fire and send it tumbling down a hole. It was a neat, one-off physics experience. Except upon completion, I discovered there was a second pinball game with an entirely different course that needed to be beaten before I could leave the Vault. It was there the ball got stuck repeatedly, requiring several restarts in order to complete due to the layout of the ‘pinball machine’ itself. What was a single fun experiment became a flat, grueling series of puzzles that took far too long to complete. And that, in turn, makes me dread what should be exciting challenges.

When I first began to play Immortals, I was not expecting much beyond a by the book open world adventure. Similar to an average Assassin’s Creed, in that respect. But Immortals is far worse off, as there is little here that hasn’t been done better elsewhere. What would otherwise be its unique qualities — a colourful world and lighthearted story — are undermined by a bland world with tiresome environmental puzzles and a grating cast of characters. For those looking for a better game in a similar mould, try Assassin’s Creed Valhalla; despite being the twenty-second release in that franchise, it is far more inventive than Immortals Fenyx Rising.