Injustice: Gods Among Us (PS3) Review 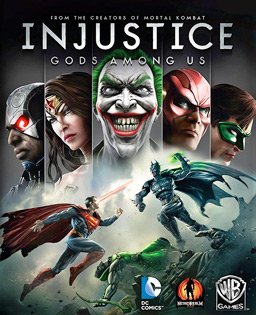 Finally the school yard arguments can be settled. Who would win in a fight between Batman and Wonder Woman? Could the Flash run circles around Green Lantern? Would Doomsday really kill Superman in a rematch? Injustice: Gods Among Us might not send out the signal through its title to anyone other than the most dedicated DC fan, but this just might be the finest superhero fighting game to ever be created. I can already hear the screams of theMarvel Vs. Capcom faithful and as one of them myself, it’s a tough call to make. I’d need a little more time dedicated to duking it out in Injustice to be certain, but at the very least NeatherRealm have a created a title that doesn’t pale in comparison to the fighting came classic. Building off their remarkable Mortal Kombat 2.0 engine to create something that combines traits from both the MK and Capcom franchises, the good folks at NeatherRealm have created a beat em up that’s actually worthy of the godly licensing. Before the game was even released the company hyped it as a potential franchise starter and after sampling the results, let’s hope that isn’t just talk.

From the moment you boot up the game is clear that the design team benefited greatly from the success of their brilliant MK reboot. The graphics, menus, general special move commands are similar, but once you start fighting, it’s a whole other ball game. Fights take on the dizzying speed of a Marvel Vs Capcom battle, each stage is amusingly interactive, and there isn’t a drop of blood in sight. Capcom found the perfect pacing for a superhero fighting game back the arcade heyday and NeatherRealm have adapted and refined it in a ludicrously entertaining way. If you’re a button masher you can smash your way through enough combos and special moves to be competitive, but if you are an experienced fighter with dexterous fingers, you’ll find yourself controlling the DC icons through blazing battles that previously only took place in your dreams.

After the debacle that was Mortal Kombat Vs. DC, it was fair to assume that there would be no fatalities in Injustice; however, NeatherRealm came up with some amusing substitutes. They’ve provided a power meter that builds up based on attacks and hits that can be used in a few ways. Each character has unique special attacks tied to their superpower (eg, the Flash goes extra fast, Deathstroke pulls out his guns, etc.) that can be unleashed gradually, or if you save up all your power you can unleash an animated super move as over the top as it is devastating (eg, Superman flies you to space before knocking you to earth, Batman shocks you before smacking you with the Batmobile). Ever since Tatsunoko Vs. Capcom, fighting game developers have been expanding and exaggerating their animated super moves and Injustice might just have whipped up some of the most grandiose yet and each one fits it’s character perfectly. There’s only one super move per character at this point, which is a bit disappointing and suggests some DLC and sequel baiting. However, that’s compensated for by the fact that levels themselves have built in super attacks. Time the right hit at the edge of a level and you’ll send your opponent through an elaborate animated attack that ends in a new location (ex: hit someone through the wall at Arkham Asylum and they’ll be beat up by Killer Croc, The Penguin, and Two Face before stumbling out the other side). These are ridiculously entertaining to watch and an addition to fighting game mechanics that should have been explored long ago. On top of that you can also grab items from the background of most levels to launch as character specific attacks, which is a nice touch.

As a fighting game, Injustice is a real treat and it also delivers as an excellent piece of fan service. Despite a few wonky redesigns (I’m looking at you overly sexualized Harley Quinn) each and every one of the 24 DC characters is treated with the respect they deserve. Sure, we’d expect Superman to have all of his powers fully utilized in special moves, but for Solomon Grundy to be so lovingly rendered with clever designs like having him pull blade projectiles out of his body…well, that’s a pleasant surprise. Even more of a shock is the fact that the story mode of Injustice is actually well worth playing. That’s right, thanks to hiring a pair of DC comics scripting veterans Justin Gray and Jimmy Palmiotti, NeatherRealm have delivered arguably the most interesting narrative to any fighting game. There’s a full two hours of animation here that’s been lovingly rendered and when you add in the fights and occasional quicktime event mini-games, you could easily sink 4-5 hours into the story mode alone. The plot opens with the Joker unleashing a nuke in Metropolis that kills a vast number of heroes and civilians, eventually leading Superman to create a global totalitarian government (!). It’s a bizarre set up, but if you’re familiar with the DC universe, you’ll know what the term multiverse means and can guess how the problem is solved. It’s not exactly a Frank Miller or Grant Morrison yarn, but for a fighting game it’s a surprisingly deep story with plenty of nods and in-jokes for fans as well as some surprising emotional resonance. Throw in a pounding orchestral score and a voice cast of animated Justice League veterans (including Kevin Conroy!) and you’ve got yourself something special. Story mode is usually the last thing anyone would voluntarily sample after buying a fighting game, but with Injustice I’d actually recommend going there first.

What’s that? You want more content? Don’t worry, Injustice has you covered. If you want to do an old school MK Tower battle, it’s there’s in Battle Mode complete with limited animation MK-style character endings and over 20 variations (fight only villains, retain one health bar through multiple fights, etc.). Then there’s S.T.A.R. labs filled with odd unlockable mini-tasks like the last Mortal Kombat game, a surprisingly detailed training mode that will show inexperienced fighting gamers how to master every character, and of course online multiplayer with all that implies. Whew! That’s a hefty package for a fighting game, especially a debut entry in a new franchise.

There are of course complaints to be made: a few shoddy bits of animation here, a few missed move opportunities there. Thankfully, it’s all stuff that falls into the nitpicking category and nothing that significantly hurts the game. Whether you’re a fighting game fanatic or a DC comics obsessive, Injustice: Gods Among Us will scratch your itch just right. Fans of both were right to be apprehensive about the title given past disappointments, but the good news is that Injustice delivers everything the developers promised. NetherRealm did such an impressive job on this and their Mortal Kombat reboot that it might even be time to dust off that old Mortal Kombat Vs DC concept again. Now that the superheroes have animated super moves this entertaining to watch, a fatality substitute is in place that could make up for DC’s insistence that their characters not get their hands bloody. I’ve got a feeling that fans will be battling it out in Injustice online for quite some time and with Lobo already announced and Martian Manhunter curiously absent, the DLC character lineup should be robust. Injustice is the fighting game the DC characters have long deserved and if NeatherRealm is committed to turning this heroic success into a franchise, well this just might be the beginning of a beautiful friendship.

Injustice is the fighting game the DC characters have long deserved and if NeatherRealm is committed to turning this heroic success into a franchise, well this just might be the beginning of a beautiful friendship.
REVIEW SCORE
9
File Under: Alan Tudyk, Injustice, Injustice: Gods Among Us