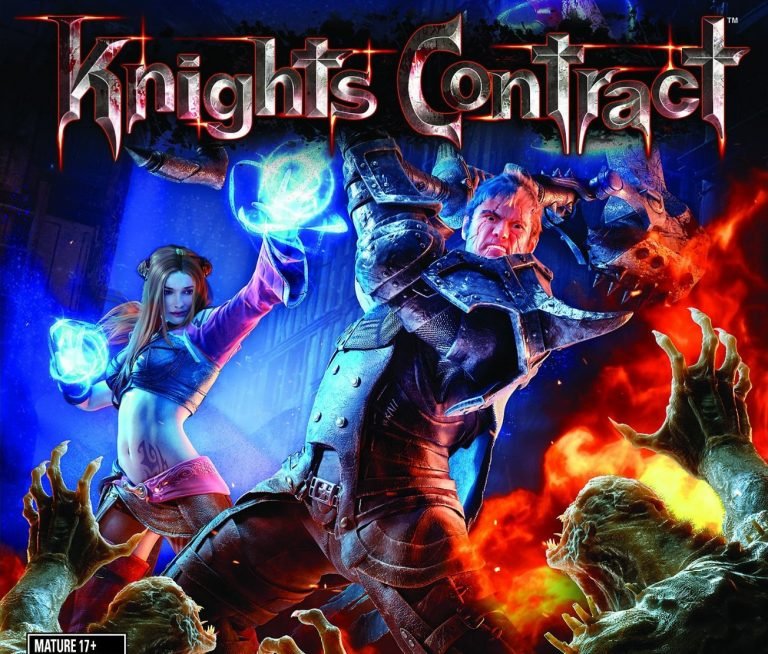 Knight’s Contract is a generic third person action game with one unique idea and that gets buried beneath repetitive gameplay, muddy graphics, and atrocious design decisions, and that’s as irritating as it sounds. The game has a few decent moments and some interesting gameplay twists, but it’s not worth the cumulative aggravation.

In Knight’s Contract, you play as Heinrich, an immortal knight with the gait, demeanor, and complexion of a constipated Frankenstein. The bad guy is Faust (yes, that Faust), a megalomaniacal doctor whose selfish quest for eternal life has led to the persecution and execution of Gretchen and her six sister witches as he attempts to acquire the shards of an artifact called the Anima del Monde.

The story kicks off after Faust resurrects the other witches to exact revenge on humanity. Gretchen, revived by less evil forces, promises to lift Heinrich’s curse of immortality if he helps her defeat her former sisters and the two enter into an agreement – or a contract, if you will – in order to enhance their power.

The gimmick is that and while Heinrich is eternal, Gretchen is not, so you’ll have to keep tabs on her health bar even while controlling Heinrich. Gretchen will jump into Heinrich’s arms with the touch of a button and she’ll regain HP whenever you cuddle. It’s one of the more absurd health regeneration mechanics you’ll ever see, but Gretchen’s weight won’t slow Heinrich down and the system flows into the rest of the gameplay surprisingly well.

It all makes for a reasonably believable and symbiotic relationship that lends itself to an otherwise conventional third person romp. Heinrich specializes in melee attacks while Gretchen can wield magic, and it’s all married to a soul-collecting upgrade system with tiered spells and accessories. The gameplay scheme is baseline functional and it’s remarkably easy for one player to control both characters.

The problem is that while the core mechanic mostly works, almost every other aspect of the design falls well short of mainstream industry standards. The graphics, for instance, are hideously dated, and the overall presentation is a hodgepodge of gratuitous ideas that play out like a disjointed adolescent fantasy. The game is packed with graphic violence and questionable nudity – Gretchen has a special attack that allows her to literally flatten enemies with her bare breasts and thighs – but the storybook narration and music would not be out of place in a Disney movie and the one-dimensional villains don’t allow for any narrative nuance.

The gameplay shortcomings are even more unforgivable. There’s no jump button, there are no worthwhile melee combos beyond X, X, X, and the controls are so loose that it’s almost impossible to respond to the unpredictable enemy AI. The dodge function doesn’t dodge anything in particular and even if it did, there wouldn’t be any point because the excessive quick-time finishing moves render caution moot.

Knight’s Contract simply lacks the technical competence needed for skill-based gameplay, and the difficulty curve suffers accordingly. The game is startlingly easy outside of a few boss battles (more on that in a moment), and most enemies are little more than cannon fodder with a tiresome amount of hit points. Many of the magic attacks are completely broken and the short cool down period ensures that there’s nothing to stop you from spamming the same four AOE spells until everything is dead.

Sadly, the developers compensate for the lazy design some of the most pointlessly obnoxious gameplay decisions you’ll find in a current generation title. Knight’s Contract essentially triggers a ‘Game Over’ screen whenever you get unlucky, and it turns what would be a merely mediocre game into an exercise in tedium and frustration.

The issues start with Gretchen, who has no survival instincts and will stand still and complacently absorb whatever cruelty the enemy happens to be dishing out. You’ll have to drag her away from Armageddon, and against fire-based enemies that interrupt your bond, you’ll often watch helplessly while Gretchen sits in a pool of fire and slowly melts into oblivion.

Heinrich himself is also not immune to splatter deaths, and avoiding ledges is far more difficult than you’d expect. The stages are littered with invisible walls, but they always seem to vanish whenever you get knocked into the air and you’ll experience an anomalous number of one-hit kills for an immortal individual.

Things aren’t much better during regular combat. It’s admittedly fun to wade into battle with a complete disregard for your own well being, but once you’ve taken enough damage, all of Heinrich’s limbs will fly off in separate directions and you’ll have to relentlessly mash the ‘A’ button for half an eternity in order to stitch him back together. It’s supposed to keep gameplay moderately balanced, but Heinrich doesn’t have a health bar, so there’s no convenient way to tell how close you are to ‘death’ and you’ll always seem to come apart when Gretchen’s health is hovering near zero.

The level layout is a similar frustration. The dead ends that would normally reward the player with a new item or weapon upgrade are instead only literal dead ends, and each stage becomes a labyrinthine maze of meandering corridors that artificially pad playtime with unnecessary backtracking in strictly linear levels.

Finally, there are the Quick Time Events, which are amongst the worst I’ve ever encountered in a game. You have to clear a QTE at the end of every boss fight, and while it’s a relatively minor design component it’s so abysmally implemented that it makes the game virtually unplayable.

To elaborate, Knight’s Contract just doesn’t give you enough time to register commands and the developers constantly exacerbate the problem with unusual and unexpected actions. I didn’t make it through a single QTE on my first attempt and I eventually started taking notes in order to increase my chances. The associated cut scenes can often run for over a minute, but you’ll seldom see more than five prompts and there’s no way to predict when one will appear based on the onscreen animations.

The kicker, however, is that the game severely punishes you for getting things wrong. Bosses will regenerate as many as five health bars should you fail, while missing one button against the final bosses will result in instant death. Even the most epic struggles become exasperating when you’re forced to replay them ten times and these bosses are nowhere near spectacular.

Knight’s Contract ultimately plays like an itemized list of what not to do, and while it isn’t broken or excessively buggy, it’s not nearly good enough to justify the required level of commitment. Every death feels inevitable, and there’s no real sense of accomplishment when you make it to the end of a stage.

That should be reason enough to stay away. Knight’s Contract is not a game without ideas, but it’s as if the developers skipped Game Design 101 and jumped directly into a Masters course load, and the lack of basic fundamentals is a constant burden that overshadows anything that Knight’s Contract might do well. I’ve played worse games, but there’s no reason to waste money on this one when there are other, more competent, third person options.