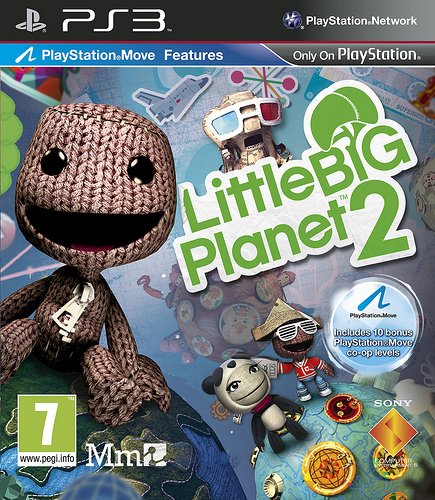 LittleBigPlanet 2 is finally here after a surprise delay from November 2010 to January 2011. Once again, we’re looking at a collection of levels provided by Media Molecule themselves, but, as with the first title, the real star of the show here are the creation tools and the resulting user-generated content that follows. If you were a fan of the first game, this one basically takes the core premise and cranks it up to 11. For everyone else you might want to read on a bit and decide for yourself.

Story has never been the highpoint of the LBP series. Or at least, the series as created by Media Molecule itself, and LBP2 is no exception. The narrative frame on which this game hangs is that a giant vacuum known as the “Negativitron” has sucked up all the wonderful and happy things/objects that populate the LBP worlds. It is your job to go through various levels to sort out the damage and chaos the Negativitron has sown in usual, super-cute, Sackthing fashion.

As with the first game, once you accept the premise that this is a game for all ages, the visuals on display are a technical marvel. Media Molecule has improved on the original LBP engine for environments that are even more lush and detailed than the first game, which was already rich in visual complexity. Real time lighting effects are phenomenal, screen tearing is rare, as is pop up and draw in, and the frame rate is nearly always rock solid. The only real criticism one can level at LBP2 is entirely down to taste and one’s preference for moody, stark corridors versus the bright, fluffy, bouncy objects that are the mainstay of LBP2’s developer-created levels. Of course, all bets are off when it comes to wandering into user-created levels, but that’s another story entirely. To complement the visuals a huge range of sound effects accompany both the story mode and are of course available to users in the Create Mode. Some surprising licensed music also makes an appearance here, such as A Fifth of Beethoven the 1976 disco hit by Walter Murphy. Sound isn’t exactly hard hitting, so people looking to give their subwoofer a workout with a stream of thunderous explosions won’t find that here, unless they go out of their way to find user-created levels cater to these tastes. But for what it is, which is largely a creation tool with a family friendly orientation, it’s hard to find a better looking, better sounding game with a nearly endless potential for variety.

In some ways, LittleBigPlanet 2 is a difficult game to review because it’s such a segmented product. While the easiest way to describe is “platform game with level editor,” that doesn’t begin to accurately cover the breadth of what’s on offer. There’s a family game here, with bright, colorful visuals and safe, playful design so that up to four people can play together either in the same room or online. The levels show a lot of ingenuity, and rarely outstay their welcome, throwing one new mechanic after another at a rapid clip, but the infamous “floaty” physics that hardcore platform gamers criticized is still very present here. Jumps can be a risky proposition thanks to the momentum of the physics engine carrying players far beyond their intended destination until they get comfortable with the controls, and the actual story mode is short, able to be knocked out in about 6-8 hours or less.

That doesn’t seem like much value for money until you consider that once that’s done, a whole world of user generated content is open to the curious. The caveat emptor here is, of course, that quality of the player created content can vary wildly with some levels being genuinely brilliant and professional, while others are cheap attempts to meet certain trophy requirements for the achievement obsessed. And then there is the level creator, which a whole other beast. All the functionality of the original LBP is intact here, plus a whole suite of new tools like logic controls, allowing the serious creators to make not just platformers, but racers, shoot ‘em ups and all manner of games with a competitive, versus mode. The tools, thankfully, have been streamlined, so that certain functions that once took hours to properly implement in LBP have take minutes in LBP 2, but that doesn’t mean the actual tools themselves are any simpler. There’s still a steep learning curve for the dedicated creator, but those willing to tough it will have an extremely powerful suite at their disposal to create professional grade levels, provided they have the imagination, time and cleverness to implement them.

This breaks the audience for LittleBigPlanet 2 into a few portions. It’s a definite buy for those with families, provided you monitor the online activities of children and make sure they don’t stray into more risqué territory such as the numerous “Kill Obama” levels the more surly American creators have already built. Serious platform junkies will take issue with the physics since there’s a certain unpredictability to them, made even more uncertain by the fact that those physics can be tweaked by others in their own user generated content. However, that user generated content has the potential to yield impressive results as seen by the story of one French enthusiast actually being hired by Media Molecule as a level designer after his levels consistently garnered rave reviews.

In the end, LittleBigPlanet 2 is must buy for families, people looking for a unique—though not necessarily tight—platformer, and for people that fancy themselves game designers but don’t want to learn how to code to do it. It’s a game of whimsy with an enormous amount of substance under all the sugar coating. For the creative willing to take the time to learn the comprehensive tools, or the curious willing to slog through the “slush pile” of amateurish user created levels to find the rare, surprise gems, the game has an infinitely long lifespan. People worried that LBP2 wouldn’t add enough to the series to justify a new, numbered sequel. LittleBigPlanet 2 shows that it couldn’t have come soon enough.

In the end, LittleBigPlanet 2 is must buy for families, people looking for a unique—though not necessarily tight—platformer, and for people that fancy themselves game designers but don’t want to learn how to code to do it.
REVIEW SCORE
9
File Under: Little Big Planet, PlayStation