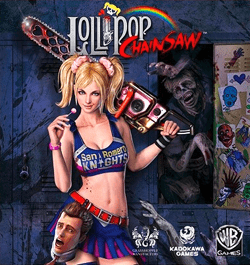 What do you get when you mix together equal parts rainbows and zombies, throw in a cup of rock and roll, boil until sweet, then serve sprinkled with the warped sense of humor of Suda51? Chances are you’ll get the latest game from Warner Bros. Interactive and Grasshopper Manufacture, Lollipop Chainsaw. It sounds like an odd recipe but it does taste awfully good.

In Lollipop Chainsaw you play as Juliet Starling, just your average American high school cheerleader who wakes up on the morning of her 18th birthday to find that her hometown of San Romero has been overrun by hoards of the undead. Oh and did I mention that in addition to her ra-ra-responsibilities she’s also a seasoned zombie hunter? Because that’s kind of important. Joined by her perverted sensei and body-less boyfriend Nick, Juliet must discover who’s behind this totally uncool plot before everything she loves becomes icky, gross and dead.

There’s some really odd juxtaposition going on in Lollipop Chainsaw. Since it’s a zombie killing game you’ll find tonnes of blood and guts and acts of violence but when Juliet takes her chainsaw to the heads of the undead you’ll most likely be shown more rainbows and stars than anything else. As a matter of fact if you kill three or more zombies at one time you’re treated to the awesomely positive experience known as Sparkle Hunting. By sparkle hunting you’ll earn bigger rewards which come in the form of zombie medallions which you can use at the in-game store to unlock new combos, upgrade your health or even purchase new outfits for our heroine. In addition to Sparkle Hunting the combat has a good amount of depth to it.

You’ll need to stun zombies with you pom-pom bashes before they are  weak enough to be decapitated, so it’s to your benefit to try and push zombies all together before whipping out the chainsaw and doing some real damage. There are a few combos that can be unlocked as you progress through the game and some special moves which normally involve Juliet’s boyfriend Nick who hangs from her belt. In order to execute these special moves you’ll need a power-up called a “Nick ticket” which I found to be pretty rare. I would have liked to have used more of these comically cute special moves but never had many tickets during my play through. If you have the medallions for it you can purchase “Nick Tickets” as well as health replenishing lollipops at the in-game store, an aptly named website called “Chop2Shop.zom”.

In order to unearth the zombie apocalypse plot you will find yourself fighting through stages with unique elements and themes. Of course there’s San Romero High where I had to save classmates and do battle with zombified teachers and O’Bannon farm where ‘shroom trips and hippy jam concerts are all too common but my favorite level was the Gulci Fun Center. This stage took place in a building built in the shape of a giant arcade cabinet and is where things got funky and very videogamey. Throughout the stage I had to navigate mini-games which were takes on classic arcade titles like Pac-Man and Elevator Action, Elevator Action being one of my favorite classic games.

While every stage was unique, that was just the tip of the iceberg because the boss battle are where the heart of this game lies. You see, in addition to the normal zombies of this apocalypse there are also five “dark purveyors” who have been released upon San Romero and each one takes the form of a Zombie Rock Lord. The first of which is a punk rock zombie named Zed who is voiced by Little Jimmy Urine from the band Mindless Self Indulgence who also composed the soundtrack for all the boss fights in the game. I’d tell you more about the other Zombie bosses but I feel it might spoil the game, let’s just say there’s some rock n’ roll, a few sitar riffs, and a whole lotta auto-tune. The level design was one of my favorite parts of the game, each one was unique and had different challenges that kept me playing just to see what I got to do next.

It’s not all sunshine and rainbows

Despite the unique level design and decently deep combat I did have a few issues with Lollipop Chainsaw, the most frustrating of which was the camera. Most of the time I had control of the camera  and could move it using the right analog stick but there were times where it was locked and I would find myself unable to see what I was fighting. I also found the enemy lock on feature to be useless as I was rarely ever fighting only one zombie at a time.

I found it much more effective to just let the combat free flow. The other thing that bothered me is that this game could have looked way better. This late into the console life cycle I’m used to games looking a certain way and I thought that some of the graphics looked a little on the rough side. That said, it didn’t take much away from my experience I just wish the in-game animations and character models had looked a little better.

Don’t Be Afraid to Laugh A Little.

When all is said and done I need to hand it to Grasshopper Manufacture, Lollipop Chainsaw is a blast from start to finish. The combat is fun, the soundtrack is kick ass, and the levels and boss fights are some of the most unique experiences I’ve had in a long time. The game as a whole is great piece of horror comedy that is on par with films like Cabin in the Woods and Army of Darkness. It also features some really stellar banter between Juliet (Tara Strong) and Nick (Micheal Rosenbaum).

Their love story and dialogue had me laughing and saying “awwwww” throughout most of the game. Lollipop Chainsaw is a great take on American pop culture and the horror genre. I would recommend having a sense of humor as a prerequisite before playing, because it you take this game too seriously you’ll miss out one of the funniest experiences of the year.

Despite the unique level design and decently deep combat I did have a few issues with Lollipop Chainsaw, the most frustrating of which was the camera.
REVIEW SCORE
9
File Under: Suda51