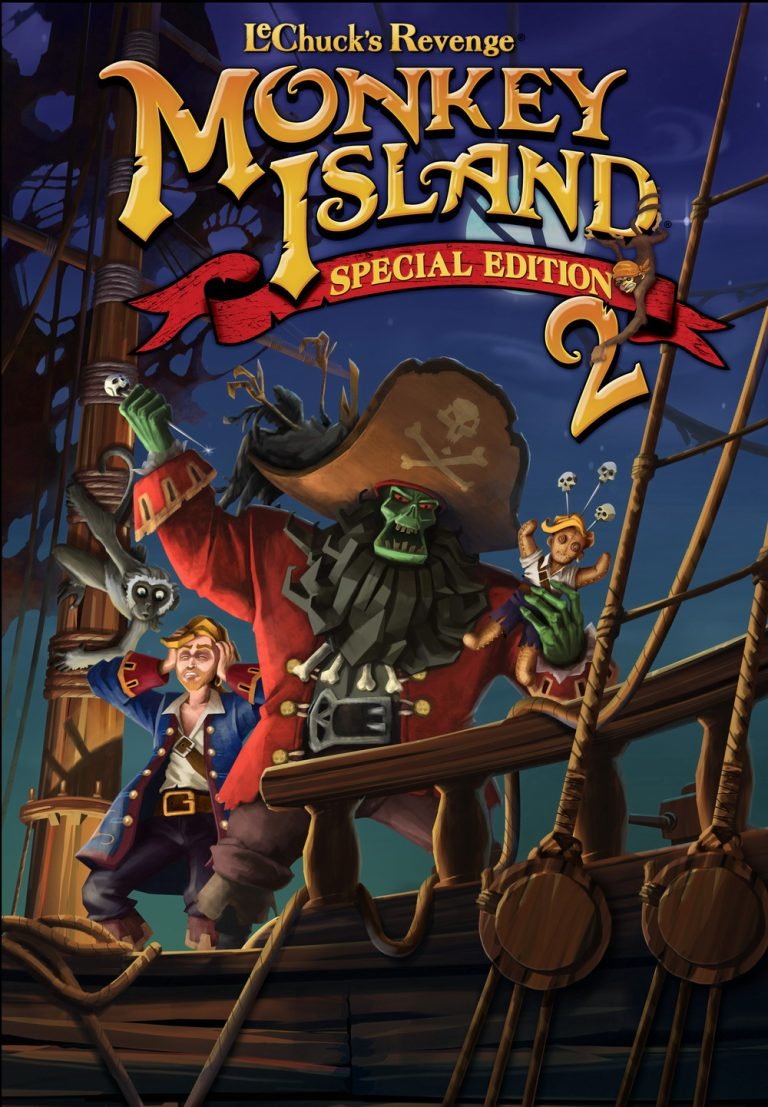 It’s one of those little things, but I always get a slight tingle of pleasure whenever I get to write the words “adventure” as a genre to describe a game. It’s a marginal niche now, having fallen from its lofty, well-loved heights back in the 80s and 90s when people thought of them as the closest analogue gamers had to interacting with a good book. But thanks to downloadable content and mobile platforms, the adventure game has gotten a new lease on life for people willing to forgo triple AAA, blockbuster visuals in favour of a rollicking yarn, and Monkey Island 2 was—and still is—one of the very best.

You Got Some High-Def In My Old School

Monkey Island 2 Special Edition is, like its predecessor, a high-definition remake of the original sequel updated for gamers of today. It continues the story of the bumbling, lovable Guybrush Threepwood, now a boisterous pirate who bends any and all ears about his tales of defeating the dreaded ghost pirate LeChuck. As the title implies, it’s actually a lot harder to kill a ghost than one might think, and LeChuck manages to return as a threat, forcing Guybrush to adventure across a few new islands in the search of an elusive treasure known only as “The Big Whoop.”

One of the big upgrades in this new version has to be the visual As with The Secret of Monkey Island: Special Edition all the blocky pixel art has been retained in a “classic mode” for those preferring a purist experience, but the default mode of the game is new, colourful artwork that more closely resembles the ideas and concept art the creators of the game doubtless had in mind that needed to be reduced significantly to run on the computers of the day. Cheerful, cartoony characters and backgrounds have a lush, hand-drawn look and feel to them, giving gamers the sense that they are playing through a well presented comic book.

Where the game really begins to show dramatic improvement is in the sound department. If nothing else, Monkey Island 2 now sports well-delivered voice acting, whereas the original was a completely text-based affair. The sharp writing now has some great delivery going for it, enhancing the genuinely funny dialog and dynamic between character The music has also been re-done to give it more of a Caribbean flavour with recognizable instruments over the older bit-based tunes fans of the game played along to. The best new audio addition, and potentially the biggest draw for older fans, is a new commentary provided by Ron Gilbert, Tim Schafer and Dave Grossman, the original creator It’s funny, insightful and an entertaining all by itself.

Fans of the series should go into this knowing that plot and puzzle-wise, this is the same old Monkey Island 2 that graced computers back in 1991. If you have any recollection at all of the puzzles that strained your brain nearly 20 years ago, then much of the struggle, strategy and surprise of the game will be lost. For players new to adventure games in general, or Monkey Island in particular, some of the most fiendish, diabolical puzzles await, as well some of the most memorable lines and moments in the entire genre. Monkey Island 2 is regularly hailed as the best game in the series, and one of the best in the genre, and with good reason. This was a “golden age” for LucasArts with Ron Gilbert, Tim Schafer and Dave Grossman all working together in a holy trinity of adventure gaming that has yet to be repeated. The result is an experience that will both make you laugh, and want to hurl your controller against the wall if you stubbornly refuse to use the hint system.

Speaking of which, hints are just one of numerous additions made to make the game less aneurysm-inducing for today’s gamer. In addition to a slowly escalating system of hints that go from gently pushing players in the right direction to flat out explaining solution Unfortunately it seems to be more location than actually tracking your progress, so it can often provide hints for puzzles you’ve already completed, and some of the “final” hints might still leave adventure game newbies scratching their heads and retreating to the internet anyway for more comprehensive solution There is now also a highlight system that lets players push a shoulder button on their controller to have every object that can be interacted with pointed out, thus saving less patient players the trouble of the traditional adventure game “pixel hunt” of moving the cursor over every speck of screen real estate to find out which objects can be added to inventory and which can be manipulated for puzzle The controls have also got a new addition, with a classic point n’ click mode still available, as well as a new “direct control” mode that lets players steer Guybrush around with analogue stick Inventory access and commands also use only the shoulder buttons and stick In other words, this is an adventure game that has finally been tweaked for use with a controller.

It’s not all wine and roses for the game, however. Strangely, some of the puzzles in the game are actually more difficult now than in the original version as the timing opportunities for performing certain actions have been drastically reduced. It adds an unwelcome twitch-based element to a genre that has traditionally been popular for not requiring FPS like speed and timing in order to succeed. Fortunately rarely occurs, but when it does, it can bring the proceedings to a dead halt as players wrestle with their reflexes, timing and cursor placement in order to progress the plot.

Monkey Island 2 Special Edition: LeChuck’s Revenge is best summed up as a DVD upgrade to your original VHS copy. There’s nothing new here in terms of content for fans of the original material, but it looks prettier, and has a slew of special features including concept artwork, voice acting, and a genuinely entertaining commentary. People who hate point and click adventures still won’t have a reason to get this, but fans of the genre will love it, and fans of the original have enough supplementary material here that even foreknowledge of plot and puzzles is mitigated. If you’re an adventure game fan, this should be at the top of your summer playing list.