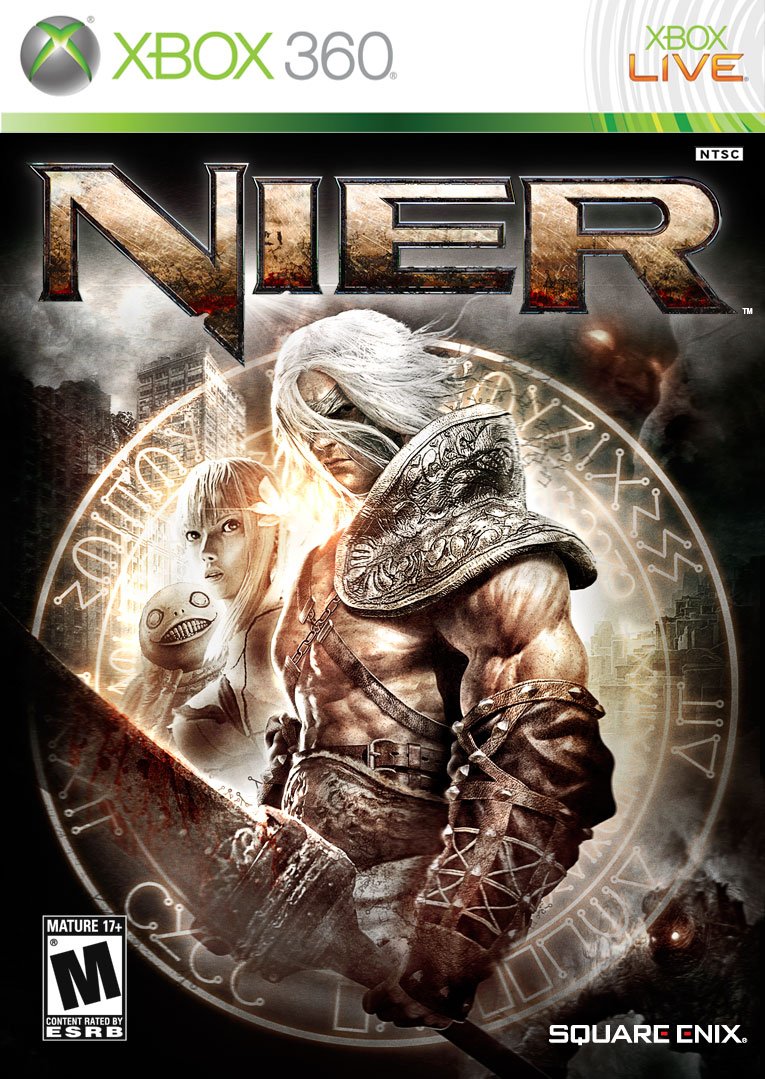 Nier claims to be an Action RPG, and it does its best to live up to the title.  Health, magic, and combat are based on your character’s stats, but there’s no turn-based nonsense, and battles are fast-paced affairs involving a lot of blood and a lot of dodging. But Square-Enix’s latest title falls a little short of epic, settling for a more personal narrative that hits just often enough to be engaging.

Nier is highly competent in terms of gameplay.  It balances Action and role-playing as well as any other game of its kind, giving players enough options to customize the protagonist without overwhelming complexity. It’s all very intuitive and user-friendly, which is good considering that tutorials are unlocked only after you’ve figured everything out.

The combat is a lot of fun, even if it is a little simplistic.  There are three different types of weapons that all have unique properties and advantages You can switch at any time, so it pays to experiment with each style to maximize your destructive capabilities The magic attacks are also nicely varied, and every spell is useful. Design execution, however, is not the game’s problem.

The advertising campaign implies that Nier is a violent post-apocalyptic tale of disease, intrigue, and redemption. The excellent opening sequence reinforces that notion. You’re thrown directly into a battle against a massive horde of evil shades set amongst the ruins of a crumbling metropolis in the not-too-distant future. Since Nier takes place on Earth, the whole fight lays the groundwork for an epic journey to rescue humanity from the brink of extinction. But then time skips one thousand years ahead and drops you into Hyrule, seemingly forgetting the story’s pseudo-realistic origin

Nier is more interested in being Zelda than it is in being Nier. The mysterious disease storyline is scrapped in favour of a generic save-the-princess adventure, leaving the game with more untied plot threads than Heavy Rain. It’s a shame because Nier has the seeds of something truly great. The characters occasionally reference the mythical lost technology of an ancient civilization, and it’s very cool to realize that they’re talking about skyscrapers and cars. Unfortunately, there’s never any payoff, so the game might as well be set on Venus.

The Zelda comparisons make Nier’s shortcomings that much more apparent. There are no clever puzzles, nor is there much of a difficulty curve. Nier’s only trick is to remove one of your abilities, which is more frustrating than it is challenging. Later stages are copies of earlier ones and the game usually just adds more bad guys to make the going tougher.

Nier positively revels in repetition. Shades come in different sizes, and some of them have armour, but there’s really only one monster that you fight over and over again.  The level design is similarly uninspired. There’s a five-year time jump about halfway through the story, and the second half of the game consists of revisiting the same locations to see what’s changed in the interim.

“…Nier deserves credit for the chances it takes.”

Even the gameplay itself is repetitive. The citizens of the three towns you visit will hire you to do various menial tasks that comprise Nier’s questing system. It’s here that the game’s RPG aspirations are evident since questing is nothing but a grind. Getting things done is a test of patience and luck, and the harvesting mechanics seem as if they’re designed to artificially lengthen playtime. Vegetables can be cheaply grown in a garden, but you’ll have to find ways to amuse yourself while waiting for them to ripen. Creatures never seem to drop the item you want, and it gets annoying after you’ve killed forty sheep for forty pieces of mutton when you’re only looking for wool.

I’m admittedly making the game sound much worse than it i There are no glaring design flaws, and the controls are perfectly balanced, while many of the boss fights are spectacular. Even the side quests are fun to complete, mostly because the NPCs have amusing stories that immerse you in the world. Still, the criticisms help locate Nier relative to other action-RPG Nier always ranges from good to very good. It just isn’t as remarkable as the best of the genre.

Nier does stand out for its M rating, and not always in a good way. The violent eruptions of blood that spew from every creature are almost comically out of place against the idyllic countryside backdrop Fortunately, there’s enough restraint to make the rating one of the most interesting aspects of the game. Rather than wallowing in juvenile gore, Nier approaches its characters with actual maturity, as with a femme fatale who borrows her vocabulary from a Tarantino film. The profanity is jarring at first, but it eventually establishes her as an authentically vulgar character in an otherwise straight-laced world.

The idiosyncratic character design permeates the game. Each character is extremely well defined with consistent motivations and believable quirks, imbuing the game with a genuine humanity that holds Nier together in spite of its flaw The voice acting is never stilted or out of place, and while the cut scenes can be a little tedious, the in-game banter is superb. There are quite a few laugh-out-loud moments, and the game frequently displays a refreshing awareness of its own absurdity. Considering that a talking book is turned into a sympathetic character with a recognizable personality, Nier deserves credit for the chances it takes.

Characters aside, Nier ultimately has more potential than it does delivery, marring a generally solid game. The design execution is good enough to make it worthwhile, but it’s probably doomed to be remembered as a game that could have been great.