During the late Sengoku period Oda Nobunaga led a formidable conquest across Japan in an attempt at total national unification. He began his conquest in 1560, when he defeated the army of Imagawa Yoshimoto with an inferior army but superior battle strategy. By 1582, Nobunaga had conquered most of Japan, but was undone by coups, led by his former sandal-bearer Hashiba Hideyoshi. Nobunaga’s legacy was incredible, changing the way war was fought, as well as altering our understanding of microeconomics and macroeconomics. If you wish to learn more about Nobunaga Oda, just visit your local game store and get Nobunaga’s Ambition: Sphere of Influence – Ascension, a compelling turn-based strategy with a solid dedication to historical accuracy.

Nobunaga’s Ambition is pretty straightforward in terms of its narrative. Players progress through history, following the path of Nobunaga Oda’s conquest through Japan. While it offers the player quests which progress the story with historical accuracy, it’s not restrictively rigid and  allows the player to progress as they see fit, allowing for a bit of alterna-history fiction (if you’re into that sort of thing.) This is something I actually really appreciate in Nobunaga’s Ambition, since it feels like games are so infrequently utilized as teaching tools. Rather than being homework under the guise of a video game, though, Nobunaga’s Ambition actually offers a challenging game with a solid history lesson baked in. 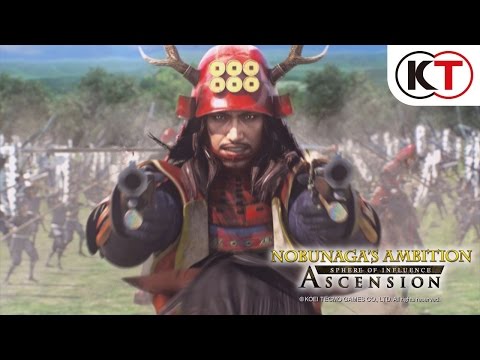 Gameplay in Nobunaga’s Ambition can seem a bit complex to newcomers— having never gotten into games such as Civilization, I found the massive array of rules and functions took a few playthroughs to get the hang of. Players start with control over a small region of Japan where their main castle is located. Each turn, players get one season to build and structure their region, depending on how much labor power, resources, and money they have. Players can also stimulate new ideas for added benefits, enact policies that can have both positive and negative effects, entreat neighboring daimyos for loyalty, or plot with generals to betray their leaders. As each season progresses, so too does a bit of history, with certain events such as the fall of various houses, the rise to power of others, and other changes transpiring. There are a lot of balls to keep in the air: on top of everything already mentioned, players also need to maintain loyalty within their ranks by ensuring subject satisfaction, and it can seem a bit harrowing to dive into. With patience and perseverance, however, even new players can figure out an enjoyable methodology to the whole production. Still, the game would be greatly helped by having a proper tutorial rather than the bunch of instructional text prompts it currently supplies.

Once you’ve expanded your region as far as you can, it’s time to gather an army and start conquering new areas, and this is where the game feels a bit lacking to me. Battles are a calculated effort, and I do like the amount of detail put into the planning procedure. Players need to amass a large number of troops, march them to their target, combat any allied forces they meet along the way, and choose to either storm the castle for conquest or raze it to the ground. But the battles themselves involve nothing more than watching numbers decrease on health bars, and while the promotional material shows what look like ground-view, dynamic battles, in my playthrough I never saw any. Oddly enough, on the whole, Nobunaga’s Ambition feels very similar to the conquest mode of Samurai Warriors 4: Empires, without the added bonus of being a Warriors game.

I’d recommend Nobunaga’s Ambition to anyone looking to dip their toe into the turn-based strategy genre. It’s deeply robust in its execution, without being so demanding that it loses its entertainment value. It has incredible replay value and will satisfy fans of the genre and history buffs alike.