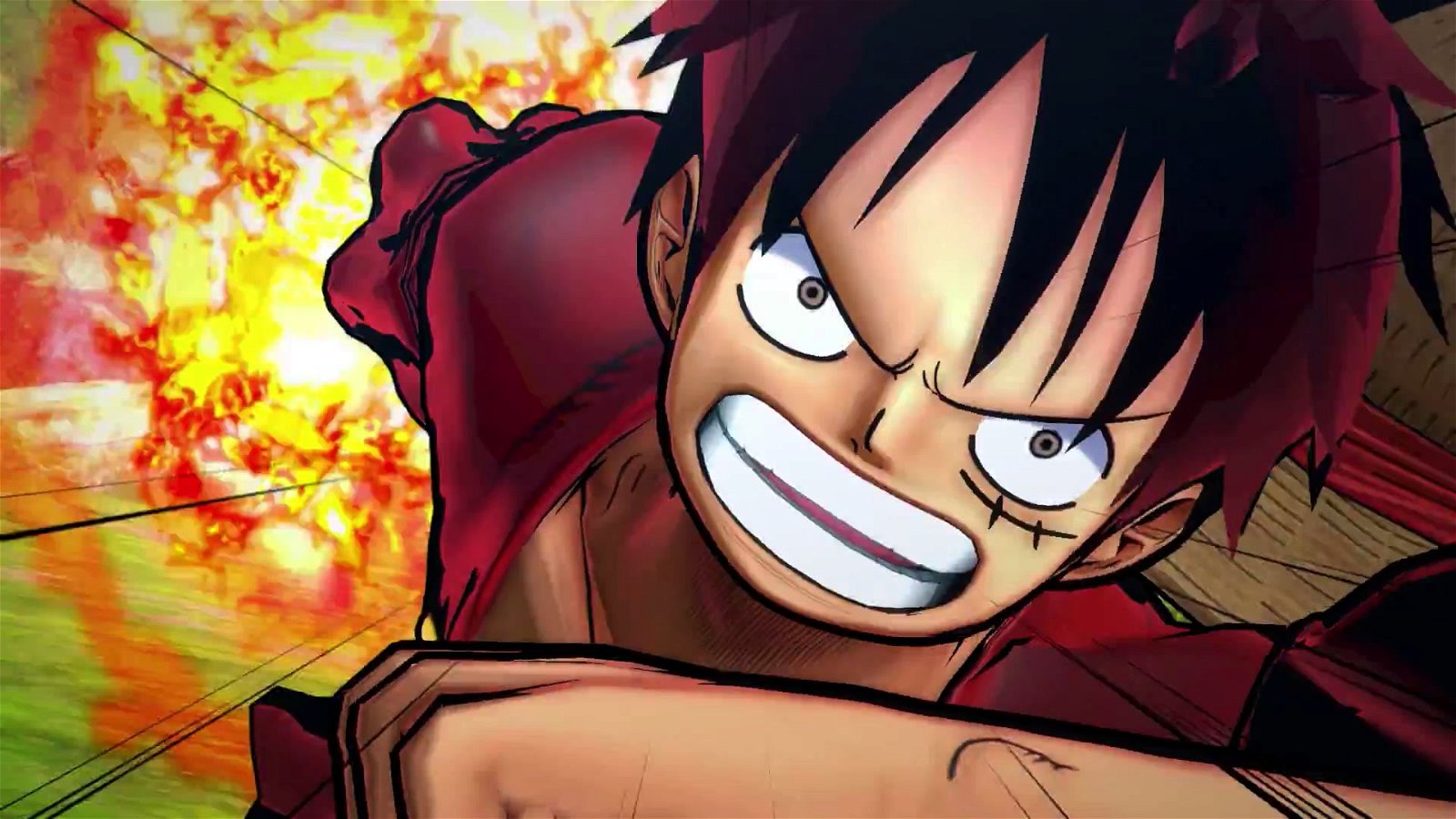 It’s hard to not think of J-Stars Victory VS+ while playing One Piece: Burning Blood.  A spiritual successor of sorts to Bandai Namco’s anime crossover title from 2015, Burning Blood shares the same developer (Spike Chunsoft), and features similar 3

-person, team-based, 3-D-arena-style fighting.  It also borrows several gameplay elements from its predecessor including its two-tiered level-up system for unlocking advanced moves and unleashing powerful ultimate attacks in battle.  One could even argue that J-Stars served as the perfect “audition” for Spike Chunsoft to prove they could make a worthy One Piece game since the series’ main protagonist Monkey D. Luffy was prominently featured in one of the game’s four campaign story arcs.  The similarities mostly end there, however.  While J-Stars only dabbled in the world of One Piece and explored a handful of its bizarre and colourful characters, Burning Blood takes an unprecedented deep dive into the One Piece universe, visually upping the ante on several fronts.   Its new-and-improved cel-shaded look closely mirrors the hand-drawn style of the manga, and its well-produced CG cutscenes use character models similar to those in game to provide a better sense of continuity.  Likewise, the game boasts dazzling animations that sell the impossible physical feats of Luffy, his pirate allies, and his enemies better than any previous One Piece game. Compared to J-Stars, Burning Blood is a modern, visual feast, and that’s certainly not a bad problem to have for a game in this genre. 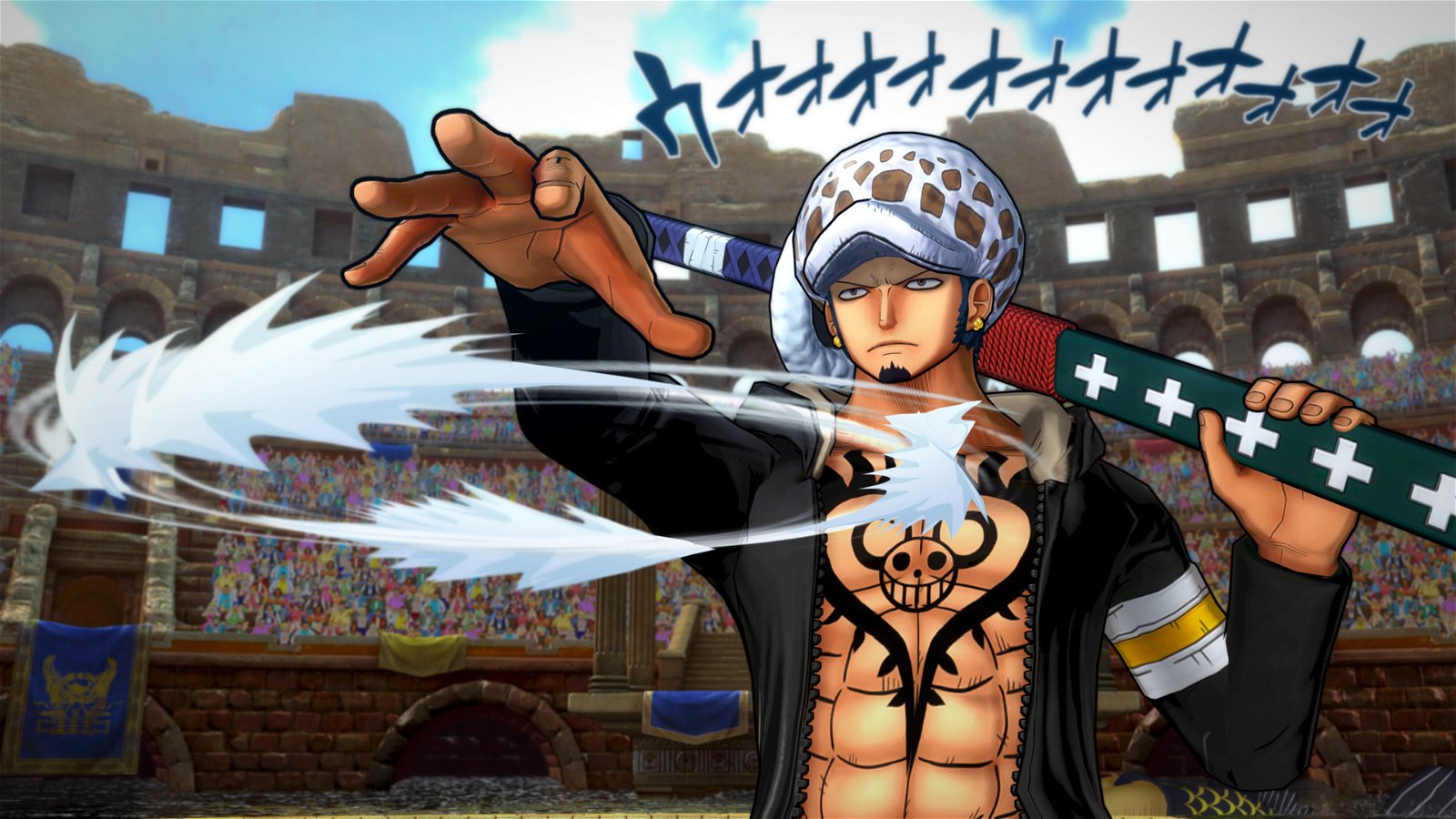 Burning Blood is hardly a slouch in terms of content either.  With over 40 playable characters and 60+ support characters, almost every notable name in One Piece canon is represented in Burning Blood’s roster.  As a gracious nod to series fans, the campaign mode is focused around the long-running series’ 2010 “Marineford Arc” (a.k.a. “The Paramount War”), a pivotal chapter in the One Piece saga that decides the fates of several key characters.  Consisting of four separate yet simultaneous chapters starring Luffy, his adopted pirate brother Portgas D. Ace, mentor and rival Edward Newgate (Whitebeard) and the villainous Marine Commander Akainu, the campaign allows players to experience the Battle at Marineford from four different perspectives, plus engage in multiple side missions loosely based on story canon.  Players who want to dive into the game’s other modes need some patience, at least initially, as “Paramount War Mode” and the mandatory tutorial embedded in Luffy’s chapter must be completed before unlocking other modes, characters and items.  Beyond that, several characters can only be accessed after purchasing them with Beli, the official currency of both One Piece and the game.  Naturally, players earn Beli though winning fights and/or completing story chapters. Once characters are unlocked they can be incorporated into 3-person teams for use in the game’s other modes, such as “Free”, “Online”, and “Wanted” modes.  Conversely, “Campaign Mode” more or less follows the events of the Battle at Marineford, so most of the time players can only play as the protagonist of that particular chapter, and will only be able to swap in a pre-determined partner or call in support when the story demands it.

In terms of gameplay refinements however, Burning Blood feels like a mixed bag.  On the positive side, the actual on-screen combat is streamlined to 1v1 plus support (i.e. one fighter in the field with two swappable allies in reserve and a support character) as opposed to J-Stars’ 2-on-2 plus support.  This ultimately means less fighting with the game camera, as it only needs to track one opponent at a time.  This also means no longer being saddled with a less-than-reliable A.I. fighting partner, so you don’t have to constantly worry about where your wingman is on the battlefield, or having to keep him or her close and conscious so you can pull off ultimate team moves.  On the flipside though, there’s less spontaneity to fights without having an ally in the field with you.

Speaking of absent allies, don’t expect to see any of those 60+ support characters in battle either.  In Burning Blood, support characters serve strictly as buffs to your team’s special abilities or attributes, such as offering increased defense when in an “Awakened” (powered up) state, or granting a the player a one-time ability to use a “Unity Assist” (tag-team attack) without consuming any of his or her “Burning Gauge” (i.e. Super Meter).  While having a support character in your corner can be beneficial gameplay-wise, visually they are nothing more than a thumbnail on your HUD, fighting alongside you only in spirit.

What really left me salty after playing Burning Blood however, was that despite my previous experience with J-Stars and the many similarities that game shares with this one, I immediately found Burning Blood obtuse and unwelcoming.  Part of the problem is the game literally drops players into the convoluted mess of a story that is “The Paramount War” without even a passing introduction to the characters or the world of One Piece. It just assumes you already know everything, and know it well.  Lore-heavy words like “Haki”, “Time Slip”, “Impel Down” and “Devil Fruits”, are tossed about as if they are part of the common tongue. While players can unlock a glossary that explains many of these references, they have to exit the game to the main menu and enter “Collection” mode to access it. 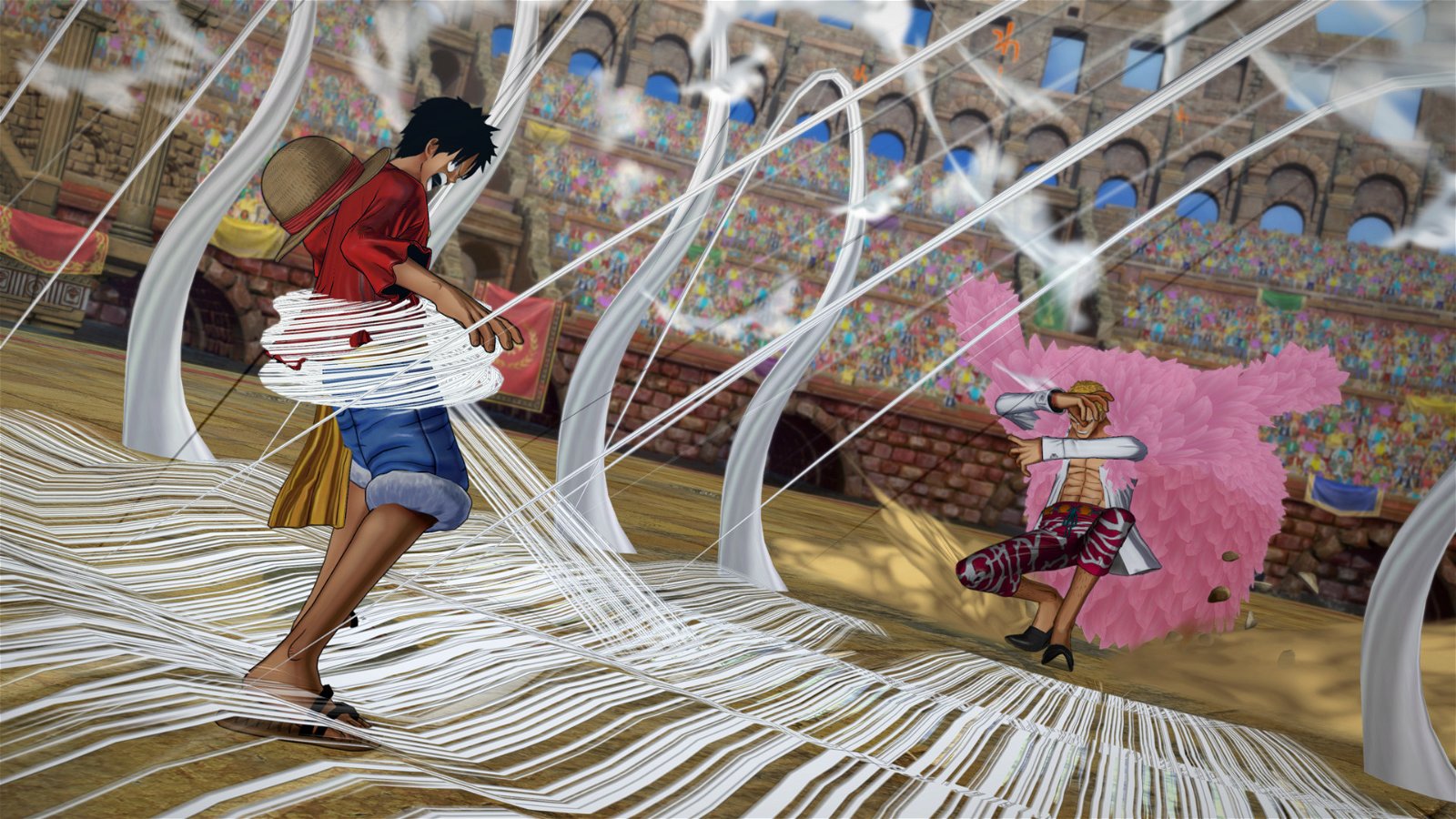 Don’t get me wrong, I get that Burning Blood was made to cater to hardcore fans (no one expects a new Naruto or Dragon Ball Z game to start from the beginning every time), but the game makes very little effort to accommodate new players from a gameplay perspective either. For example, the crash course tutorial at the beginning of Luffy’s story chapter follows the same pattern every time. It quickly introduces a concept that players must grasp by simply reading on-screen text, then it promptly ushers players into a live fight, and expects them to perform the move or technique without any on-screen pointers as to what buttons to press.  In fact, at the beginning of the very first tutorial the game essentially informs you that all of its teachings are based on the default control setup even if you’ve configured yours differently.  The only controller buttons that are regularly displayed in the tutorials or move-lists are L3 and R3, while all other buttons are represented by different coloured rectangles with the in-game action that they perform displayed within them.  Players are simply expected to memorize the button’s operation instead of its actual symbol. If they forget, they’ll have to revisit the controller configuration screen to refresh their memory, and translate that logic in their head to the move list commands until they become second nature.   This was not as big of an issue in J-Stars, which frankly was more of a button-masher and had simpler commands overall, but Burning Blood is a meant to be a much more technical fighter, expecting players to make use of basic and advanced versions of guard breaks, player tag-ins, and more. So its puzzling that Spike Chunsoft would want to put more obstacles in the player’s way to learning the game and actually having fun.

If you’re a dedicated fan of all things One Piece, including its previous videogame incarnations, this game will likely satisfy your itch.  Its large roster and multiple game modes promise to keep One Piece devotees entertained long after they’ve completed every challenge in the campaign, and there are plenty of other goodies to collect.  The game’s “Paramount War” centrepiece is loud, brash, and so filled to the brim with Japanese machismo and melodrama about brotherhood, family and self-sacrifice that it’s almost sickening; just as you’d imagine a One Piece game should be.   On the other hand, if you’re completely new to the franchise, bear a strong dislike for story spoilers, or get easily turned off by steep initial learning curves in your fighting games, Burning Blood might possibly be the worst way to make your initial plunge.  Proceed with caution.

If you’re a dedicated fan of all things One Piece, including its previous video game incarnations, this game will likely satisfy your itch. 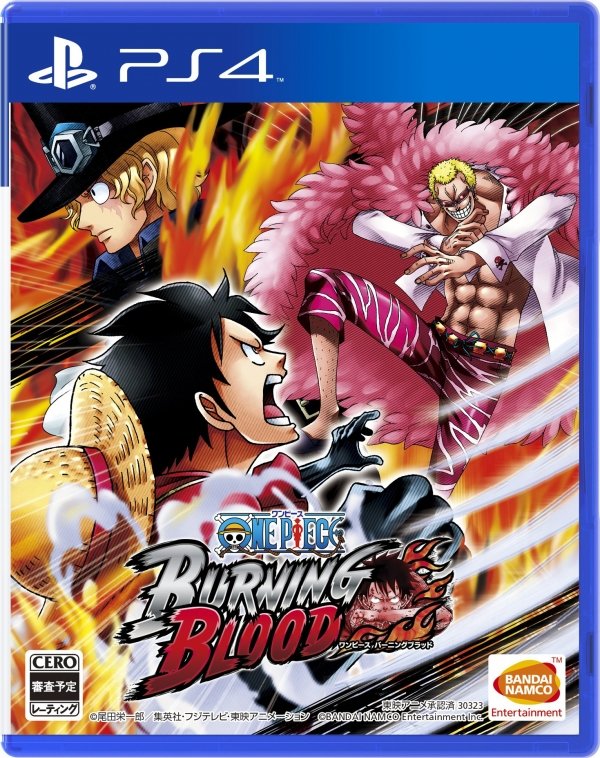