Chomping Through My Childhood 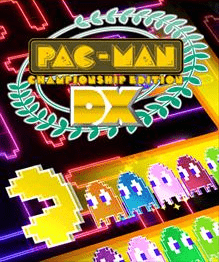 Let me begin this review by saying I have fond yet frustrating memories of PAC-MAN dating back to my father’s home office almost two decades ago. He had one of those ancient IBM clunkers that ran entirely in DOS and didn’t have a mouse. By some twist of fate, it did have what are now considered retro classics: Defender, Space Invaders, Prince of Persia and of course, PAC-MAN. I spent countless hours mashing the keyboard trying to best those games, but I could only ever make it past the first few levels (or in PAC-MAN’s case, the orange). However, after receiving my first NES console, my time prostrating before the Atari Old Ones waned considerably.

Fast forward to present day. Having had a brief dalliance with Pac-Man during university (chomping on ghosts using my Dashboard widget saved me from countless hours of narcoleptic lectures), I figured my PAC-MAN days were more or less over. That was before I downloaded PAC-MAN Championship Edition DX to my Xbox 360.

Now I see ghost trails whenever I close eyes.

Pac-Man Championship Edition DX is the third iteration of “classic” PAC’ to be released as a download-only title (proceeding the previous PAC-MAN/Ms. PAC-MAN combo and PAC-MAN Championship Edition, respectively), which I’m sure will stoke the ire of pellet-chomping diehards with tight budgets. After all, Pac-Man Championship Edition reinvigorated PAC-MAN’s stale visual style with inviting fluorescent rave-candy graphics and pulse-pounding techno background music while providing a variety of new game modes. The most notable twist was that survival was no longer gamers’ ultimate goal. Rather, players could choose between five or 10-minute rounds that challenged them to get the highest score possible. There were no more levels in the traditional sense – consuming all of the pellets on one side of the board would unlock a special fruit/item that, when eaten, would refresh the other side of the board with new patterns of walls and pellets. This ensured that every game had a constant frenetic pace that forced players to constantly change up their strategy while continuously traversing the entire board.

This core gameplay mechanic remains in place in PAC-MAN CH: DX, with one key addition that warrants the purchase of this title: ghost trails. Rather than starting in the middle at the beginning of the round, sleeping ghosts are now placed sporadically across the game-board. When PAC-MAN passes beside them, the ghosts become “angry,” and begin following Pac-Man relentlessly; as soon as a ghost joins the trail, another “angry” ghost instantly spawns in the middle. Consuming all the pellets/fruit on the map still refreshes the game board, but this time additional sleeping ghosts are added as well. By continuing to reset each side of the game board and rousing more ghosts, PAC-MAN can build up a sizeable ghost trail, transforming gameplay into a frenzied PAC-MAN/Snake hybrid that is simply a blast to play. There’s a certain sadistic thrill that comes from consuming a power pellet and chaining together a 40+ ghost chomping massacre then watching consecutively larger numbers explode across the screen in increasingly intense shades of red.

I will admit that it did take a bit of time to get used to, and this new game mode may not appeal to everyone (my girlfriend still maintains that “it’s just not PAC-MAN!”). Fast-forward two weeks, and I can’t stop crunching pellets. I sit in front of my Xbox and, rather than racking up more kills in COD: Black Ops, I’m trying to crack the top 1000 on PAC-MAN: Championship DX’s Highway course. For the first time since I was four years old, PAC-MAN has once again taken over my life.

Of course, ghost trails are just one small part of PAC-MAN: Championship Edition DX’s new additions. I could talk to you in detail about the new Ghost Combo mode, new stages (each complete with 10-20 plus time trial challenges) or the ability to mix and match stage, colour and character palettes to match your personal PAC’ preferences. I could talk about all of these things, but honestly, I’d rather just end this review.