Calling Nintendo the Disney of videogames is a cliché at this point, and the comparison is usually flung about as a criticism. However, with a game like Pikmin 3 that comparison feels right in the best possible sense. At their best, Nintendo makes games with universal appeal that are artfully crafted to be simple enough for children to grasp, yet complex enough to reward older gamers through deeper play (or maybe IT’s the other way around). At Disney’s best, that’s the experience they offer as well and as cynical as folks like to be about the two Legendary companies, when they are on their game the results can only be described as magical. Pikmin 3 is one of these experiences. Shigeru Miyamoto’s pet project has been in development for so long that a console shift was necessary, and the results were well worth the wait. It might not be perfect nor is it the title that will win over the Wii U skeptics, but Pikmin 3 is exactly the type of game that Nintendo should be making. No other developer is capable of creating something so gorgeously immersive and oppressively cute that has equal appeal to a NES veteran and someone picking up a controller for the first time. Hopefully, the big N can keep cranking out work this good for decades to come.

While Pikmin 3 earns its numbered sequel title by feeling instantly familiar to anyone who dabbled with the first two chapters on GameCube, the designers created an entirely new narrative for newcomers. Boasting a none-too-subtle environmental message, the game is about an Alien race known as the Koppites who have swallowed up all of their natural resources on their planet and are cruising the universe looking for a new planet with num-nums and a functioning ecosystem. You’ll play as three Koppite astronauts (Captain Charlie, engineer Alph, and botanist Brittany) who crash land on a new blue planet in search of the means to save their species. The trio is initially split up but discovers a strange race of subservient half-plant, half-animal creatures known as Pikmin. These little guys will follow you around in armies a hundred strong, and can be flung at enemies or obstacles to help you out to the best of their tiny abilities, often to their deaths.

Tossing Pikmin around is the core of the game, and there is a variety of the little guys to choose from with differing powers (red Pikmin are resistant to fire, but die in water, rock Pikmin can break stuff with their… er… rock bodies, flying Pikmin fly, etc.). As the astronauts, you’ll explore an alien landscape filled with puzzles to be solved, enemies to be killed, and delicious fruit to convert into life sustaining juice. You’ll play in 15-minute “day” bursts, returning to your ship at night to avoid death. Get to the ship late and all your Pikmin are eaten by nocturnal creatures. Every night you’ll consume a bottle of juice from the collected fruit. Run out of juice and it’s game over. The structure is unique and filled with rewards. You’re free to explore as slowly or quickly as you like provided that you collect enough fruit and the game nimbly mixes puzzle solving and boss battle action quite well. At the end of each “day”, you can watch a quick replay of your experience and replay any day at any time to avoid squandering your resources. The result is an addictive short burst play design that will constantly have you itching to “just play one more day” regardless of the human demands of sleep or sanity.

Nintendo tossed a few new intriguing twists into the formula as well, like having three Pikmin-controlling astronauts that can split up to perform simultaneous tasks. It’s not perfect, since giving full control of an astronaut to the computer will cause the death of Pikmin by unforeseen enemies. However, it’s a clever way of splitting resources during a single day cycle that often works well and challenges players to compartmentalize up to three separate gaming activities at once, miraculously without ever causing brain aneurisms. The other big change comes with the controls, the game’s biggest weakness. The core mechanic of flinging Pikmin was clearly designed for the Wiimote-nunchuck set-up and even with a “lock on” option, aiming with the gamepad analogue stick never quite feels right. Granted, you can choose to play with a Wiimote and nunchuck, which aims smoothly, but the gamepad, is still a vital component to controlling multiple characters and navigating through some complex maps. Juggling a Wiimote and nunchuck with the gamepad on your lap while solving multiple puzzles at once is too much for even a veteran multi-tasker to pull off. So, for the sake of actually being able to play the game to its fullest, you’ll be stuck with the awkward analogue aiming controls. After a while, there are ways to compensate, but it’s never quite as strong a control scheme as it should be.

However, despite these at times awkward controls, it was more than worth it for Nintendo to port this puppy onto the Wii-U. Aside from a well-implemented second screen map system, the HD graphics offer some of the most gorgeous visuals Nintendo has ever created. The world of oversized plants, massive human artifacts, cute Pikmin (so cute that you won’t want to kill them, but you must!), and almost Guillermo Del Toro-style surreal monster bosses is a wonder to behold and easy to get lost in. The Wii version simply couldn’t have matched the game’s beauty, and it’s a definite showpiece for WII U hardware.

The beauty never ceases throughout the varied stages of the story mode, with a plot as simple as you’d expect from a Nintendo joint, but boasting surprising emotional heft. When you’re done with that, there are a couple of mini-games to extend playtime. One is a Multiplayer mode in which players compete to find fruit with their Pikmin to fill out a Bingo card that’s fun, but features a horrible design flaw that places the gamepad player at a huge, unfair advantage by having a map to all the fruit that the second player can’t see. Much more satisfying is a mission mode offering short “against the clock” mini challenges featuring even more breeds of Pikmin than in the story mode. The game itself never gets too mind-bustingly challenging, but the mission mode extends playtime with brain ticklers that will have players getting red-eyed through late night sessions determined to finally solve one last impossible challenge.

The control flaws and ho-hum multiplayer components to Pikmin 3 definitely hold the game back from being one of Nintendo’s all time finest achievements, but should not put gamers off from experiencing the Wii U’s first must own title. It lives up to and even tops previous Pikmin games to provide an immersive, beautiful, challenging, accessible, and wholly unique gaming experience of the kind only Nintendo can provide. In a time when many critics are quick to dismiss the Wii U as an epic folly for the Nintendo titans, Pikmin 3 proves that the big N can still deliver gaming masterpieces that no other company could dream up. Hopefully this is but a start of the Wii U’s swell of impressive titles and not a last gasp of Wii-era creativity. The gaming landscape needs more than zombie slaughter and war simulators, and the Nintendo geniuses are just the folks to fill that gap with wonderfully immersive experi

The control flaws and ho-hum multiplayer components to Pikmin 3 definitely hold the game back from being one of Nintendo’s all time finest achievements, but should not put gamers off from experiencing the Wii U’s first must own title.

File Under: Nintendo, Nintendo Wii U, Pikmin
A retail version of the game reviewed was provided by the publisher. You can read more about CGMagazine reivew policies here. 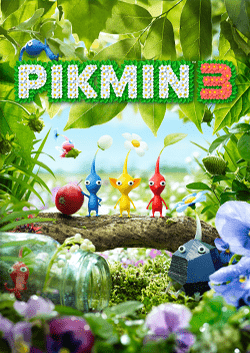