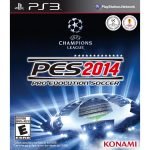 I doubt many people will read past the first paragraph of this review. If you’re the average Canadian soccer fan, or football fan for the above average, you’ll probably lose all interest in Pro Evolution Soccer 2014 (PES 2014) once I tell you that the teams from Major League Soccer and/or the English Premiere League are not in this game. The rights to their names and likenesses have been locked up by EA Sports for their FIFA franchise. That being said, if you can look past the lack of Robbie Keane from the LA Galaxy, or the absence of Juan Mata from Chelsea, than there really is some fun to be had in PES 2014.

That fun won’t be found in the game’s presentation department though. Sure the Fox Engine from the upcoming Metal Gear Solid V: The Phantom Pain makes this soccer simulation look good, and yes the player movements are very fluid and natural looking; however, after that I am struggling to find positives in the presentation department.

As a casual Canadian soccer fan, the presentation aspect of PES 2014 is even a little insulting once you realize that someone at Konami decided to leave the Canadian National Team out of the game. I guess that’s not surprising since the Canadian Soccer Association is dealing with an inability to create or keep Canadian soccer talent, and let’s not even start with the suspected match fixing that might shut down the Canadian Soccer League. I understand that Canadian soccer is very troubled right now, but I really don’t care. Without a national soccer team to call my own, on top of the lack of common licences, there is really no reason for the average Canadian soccer fan to become attached to this game.

Other presentation problems include an occasionally confused colour commenter who was partnered with a play-by-play announcer who basically just reads the names of every player who touches the ball. The music library is also a weird choice, or perhaps just odd for a North American audience. It is comprised of European opera and soccer chants that you would expect to hear while watching a La Liga match.

But like I said in the first paragraph, if you can get past those presentations problems you can still have a lot of fun with the quality gameplay of PES 2014. As a franchise, PES is normally an unforgiving mistress for anyone who does not play it regularly, but luckily this year’s edition comes with six different skill levels that allow any gamer to feel like a soccer god. For those who don’t normally play soccer games, or who want to jump from FIFA to PES, there is also a deep training mode that will teach you the controls of the game, the proper game-play techniques, and even basic soccer strategies that you can use in various situations.

Add the fact that every player is more physical in one on one situations, and all the pieces come together to allow me to draw a defender away enough to open up the centre lane or pull off a single touch goal that started with a corner kick. PES is fun because winning is fun, and it is possible for anyone to pull off meaningful game winning plays with the way PES 2014 is set up.

That being said, no game is perfect and PES 2014 is no exception. In the gameplay department my main complaint is that the power meter for passing/kicking is too hard to properly control. I get that power meters are meant to add a bit of chaos into the mix, but it’s not enjoyable to feel like you are constantly making up lost ground due to the errors of an inaccurate power meter. Other than that, the number of game-modes inside PES feels limited compared to FIFA from EA Sports, and a few frames drop when the game’s replay system takes over the screen.

Overall, I don’t think that Canadians were considered as a serious audience segment when this game was designed, but if all you want great soccer game-play than PES 2014 is a solid choice.

I don’t think that Canadians were considered as a serious audience segment when this game was designed
REVIEW SCORE
8
File Under: Sports