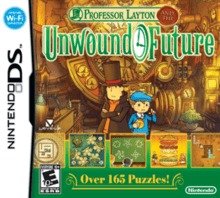 After the success of the first two Professor Layton releases on the Nintendo DS, it should come as no surprise to see Nintendo localising the third.  Professor Layton and the Unwound Future continues to engage players, taking fans on an adventure through time in one of his most exciting quests so far. Its blend of mystery storytelling and brain-teasing puzzles somehow forms one of the most unique and engrossing gaming experiences available for the system and a style that’s already captured the hearts of gamers worldwide.  It’s clear that the developers knew they were onto something with the original Professor Layton release.

Like the first two entries in the series, the game basically builds an adventure around a classic mystery and allows you to progress through it by solving a string of standalone brainteaser-style puzzle The storyline plays a big role in the progression of the game and will provide you with all of the clues needed to solve the various mysterie While it’s not necessary to play the first two Layton games (Curious Village and Diabolical Box) to play Professor Layton and the Unwound Future, returning fans will get more enjoyment out of the story. Now that the characters of Layton and Luke have been established in the first two entries, this is the first game in the series to feature a story that’s actually character driven and plays off the background of Layton himself.

While the mystery is the meat of the game, it’s the challenging brainteasers that give it its unique charm. You encounter these as you move from place to place, talk to people and tap around with the stylus to explore the environment. Professor Layton and the Unwound Future’s puzzles range from logic puzzles, spatial puzzles, word puzzles, number puzzles, sliding block puzzles and tons more.  For those familiar with the series, you will feel right at home with the types of challenges awaiting you. There are still some throw-back puzzles that will remind you of the past games, such as moving block puzzles, but they’ve also thrown in a fair share of new puzzles as well. You’re also rewarded based on how many attempts it takes you to solve the puzzles – the fewer the attempts, the more Picarats (a type of currency that you’ll earn). It’s a good incentive to get you to stop and really think about the puzzles before quickly jotting down an answer. You’ll even be able to locate hidden Hint Coins that you can use to purchase hints for times when you get stuck on a particular puzzle.

Aside from the main story, there are also a few new mini-games featured in this adventure.  The Picture Book allows you to place stickers – you earn these by solving puzzles in the main adventure – onto one of three picture book  As you place the stickers on the pages, the story will change to fit it. Once you fill in the story correctly, the next picture book will unlock. Another mini-game requires training a parrot to carry items to a character using a series of ropes to act as perches or rebounding wall The toy car mini-game presents a unique mini-game in which you must guide your toy car to the goal while picking up all of the specified items strung around each of the tracks in the proces You’ll be given a set number of arrow tiles with which to guide the car and it’s up to you to figure out where to place them in order to complete the track As you solve puzzles in the adventure, you’ll be able to locate more tracks to play. These three mini-games are both extremely enjoyable and a nice diversion from the main game.

The story’s presentation is top-notch, with tons of beautifully animated cut scene  The classic European look of the game makes it the perfect environment for its type of mystery tale and each new area is as visually appealing as the one before it. Even the cutscenes that appear at periodic intervals are very smooth and well animated. In addition, the musical presentation perfectly melds with the other aspects of the game and seems to fit its tone. There are quite a few amazing musical tracks to enjoy and the voice acting just adds to what is an already impressive audio experience. The designers obviously put some time into making the game look and sound as good as it plays, and this extra effort really pays off in the finished product.

At this point, the Professor Layton games are a known commodity, but that commodity is a finely crafted one.  The latest installment offers the same great experience from the last two games, and instead focuses its attention on offering up what is easily the best storyline of the series to date, not to mention three of the best mini-games as well. It’s safe to say that if you’re a fan of the franchise, this is a game you absolutely do not want to mis And if, by chance, you’ve yet to experience the series, this enthralling title should offer up all the incentive you need to finally give it a try.

The Professor Layton games are a known commodity, but that commodity is a finely crafted one.
REVIEW SCORE
9
File Under: DS, Nintendo