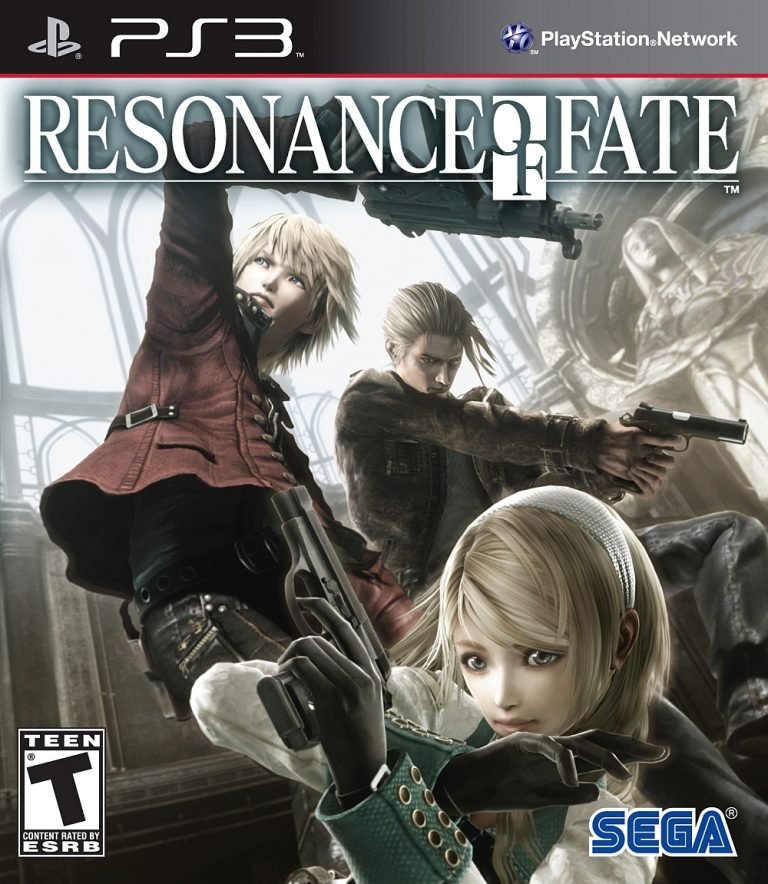 Resonance of Fate is in some ways a victim of circumstance. In any other year, a March release of a Japanese RPG would be an immediate success for fans of the genre but this particular March sees this unique JRPG going up against God of War III, Final Fantasy XIII and Sega’s own Yakuza 3. As a result, it finds itself in the position of being overlooked simply because it’s a new property in a wave of higher profile franchises But JRPG fans who give this game a miss may be doing themselves a disservice.

The World is a Wasteland

Resonance of Fate is set on a post-apocalyptic Earth. Humanity’s continued abuse of the environment and resources has created an atmosphere no longer breathable by people. The remaining pocket of our species is living in the last city of man, in and around the proximity of giant atmosphere processor known as Basel. When the game begins, society has been growing comfortable and decadent within this limited sphere of existence but things quickly take a turn for the disastrous when it comes out that the Basel processor is beginning to malfunction. Players take control of a group of mercenaries and become embroiled in the events of the main plot. Resonance of Fate  doles out its story in small chunks, with chapters that have numerous optional missions and activities, and main missions to advance the story and chapter.

The game sits somewhere on the high end of presentation for a multi-platform JRPG. While Final Fantasy XIII is unquestionably the current king of graphics in the genre, Resonance of Fate manages to hold its own with some striking, delicate art direction. There is an ornate, steampunk aesthetic to Basel, with moody clouds in the sky, shining down on distinctly Victorian, old world towns complete with cobblestones and massive gears and cogs turning for purposes unknown. The character models are polished, standard anime fare with an enormous amount of personal customization. Tri-Ace struck a deal with various Japanese fashion designers, resulting in a range of shirts, pants and other accessories that look like they came straight off the rack of a cutting Shibuya clothing store and it’s easy to see the more fashion-inclined players getting sidetracked simply by the overwhelming shopping choice If there’s any place that ROF lets itself down visually, it is in the dungeons, which are drab, Spartan battle fields with little detail or character.

Sound in the game is uniformly strong. The ubiquitous Nolan North, aka, Nathan Drake of Uncharted fame, makes an appearance as Vashyron, one of the lead On the whole, the English dubbing job is extremely good, even better than FFXIII, but for purists there is also the option to use the Japanese language track. The music is a clash of old and new with some haunting orchestral compositions transitioning into more rock and techno-inspired tracks in combat. Of particular note is how dynamic the music is during combat, playing quietly and more subdued until players invoke a “Hero Action” that is complemented by an explosive rise in musical intensity.

If there are two things Resonance of Fate should be noted for, they are the sheer difficulty of gameplay and one of the best battle systems seen in a JRPG in the last five year In a sense, ROF seems to be a deliberate “Anti-FFXIII” statement by tri-Ace, as it does nearly everything in opposite manner to its contemporary. Where FFXIII is linear and controlled, ROF provides choice and exploration. Where FFXIII is easy, Resonance of Fate  is fiendishly difficult. Where FFXIII created a combat system in which players are conductors, orchestrating AI Action, ROF puts player firmly in the driver’s seat with a real-time, turn-based hybrid system that has simply never been seen before.

Here is where Resonance of Fate ’s biggest criticisms lay, in a complex, difficult battle system that is done a disservice by the lack of proper tutorials and a steep difficulty curve from the outset. The bare-bones tutorial for combat is easy to miss entirely, and even if players find it, does a terrible job of explaining the system, outlining general concepts but failing to illustrate how these concepts are actually executed. There is a marvellous balance of give and take to the battles, with players having to choose between using “bezels”—a kind of currency for dynamic, turn-based style Action moves—and using the less powerful real time combat move Using up all bezels puts players in a “critical condition” state where they can no longer perform these “Hero Actions” and take magnified damage, but never using them at all means being overwhelmed by enemies that require more than just pointing and shooting. It’s a system that requires patience and experimentation, but ultimately yields some of the most rewarding battles ever seen in a JRPG, with John Woo-style “gun ballet” as characters somersault, slide and vault over enemies, guns literally blazing.

The opening hours of Resonance of Fate are the acid test for many player In some ways, this is the Demon’s Souls of JRPG From the get go, it is difficult, demanding and merciless, but it is also fair. Players coming off Final Fantasy XIII will be in for a rude shock as the opening battles may wipe them out in minutes and it never gets easier. The game constantly pushes players to better their skills, introducing new enemies and tactics that force players to refine their understanding of the battle-system. This is not a game for everyone, and is definitely not recommended for players new to JRPGs or more casual fans of the genre. The game assumes players are veterans and treats them that way from start to finish. Those that are willing to stick with it however, will find a game that doesn’t match Final Fantasy XIII graphically or melodramatically, but outshines the core gameplay in just about every other way. For hardcore fans of the JRPG genre, this is an overlooked gem.

The opening hours of Resonance of Fate are the acid test for many players. In some ways, this is the Demon’s Souls of JRPGs.
REVIEW SCORE
8
File Under: RPG, turn based strategy