Once anything is around for 20 years or so, a sense of nostalgia tends to kick in. Over the last decade classic videogames from the 8-bit era have become cherished relics for everyone of a certain age, from ironic Mario T-shirt wearing hipsters to sincere Mario T-shirt wearing nerds (which became a not-so-dirty word in the process, as well as a delicious candy). As a result, a new genre has popped up in videogames, best described as “gaming nostalgia.” From freshly produced 8-bit Mega Man sequels to a Scott Pilgrim-inspired arcade beat em’ up or the accurately titled Bit.Trip series, old school gaming lovers have been treated to dozens of titles that attempt to revive their lost youth. Designer Brian Provinciano tried to get in on the trend early and worked for years on Retro City Rampage, which finally just launched on nearly every possible platform. Unfortunately the many delays have diluted the charms of the project ever so slightly since he’s no longer the first member of the nostalgia gaming party. However, if you’re someone who has ever blown in a NES cartridge or owned more than one attachment for a Sega Genesis, Retro City Rampage is a game designed specifically to warm all eight bits of your heart (note: according to science, there might be more than eight components to the human heart). 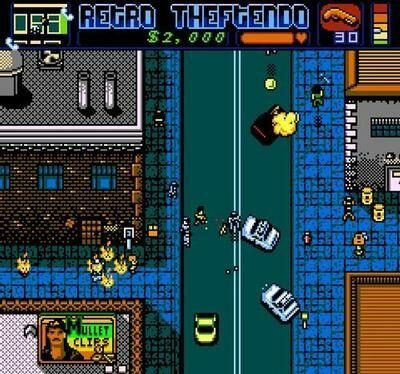 The general concept for the game can be summed up in a few words: 8-bit Grand Theft Auto. The graphics are straight out of a top-down NES action game like Metal Gear or Teenage Mutant Ninja Turtles, but you play a big city punk who can wander around the open map to shoot up pedestrians or get in car chases at any time. Sounds simple and it works. The one nice surprise is that unlike most GTA clones, you’ll probably have the most fun playing the missions. There’s not exactly a deep and exciting narrative arc to follow, but the missions are designed to cram in as many pop culture and videogame references as possible. Within ten minutes of play I had seen a parody of the Mega Man 2 opening (which hilariously acknowledged the scene was over-parodied), learned combat training from Snake, shot Bill and Ted outside of their phone booth, drove around in a Delorean with Doc Brown, and was assigned a new mission with Ricky from the Trailer Park Boys. Yep, this is a game made for, by, and about pop culture addicts. Thank god I’m one of them.

The references never stop, so if you don’t find that sort of thing amusing, there’s really no sense in playing the game. The writers took the Airplane! quantity over quality approach to comedy. While you may not laugh at most of what’s thrown at you, so many jokes pile up that you’ll at least be worn down into giggles. In all honestly, most of the humor gets smirks of recognition over belly laughs, but there’s enough so it hardly matters. The gameplay is pure Grand Theft Auto, based on missions and easter egg collecting. Most of the missions involve you picking up a special power ripped from other games (proton packs, Zelda Pegasus boots, etc.) for variance, but if you’ve played any GTA game you’ll know what to expect. Lots of shooting (with plenty of creative weapons and a decent cover mechanic), lots of car chases, lots of citywide item grabbing, etc. When levels get too repetitive or boring, the game will make a self-conscious joke about it, which is nice. But really, if you hate GTA there’s no point in picking this up. That’s the format and they stuck to it. Good thing it’s so addictive.

The design of the game is absolutely gorgeous. Not a pixel feels out of place in the 8-bit aesthetic. The only thing that tests the horsepower of modern system is the sheer volume of things that can be on screen at once. The game is an overwhelming rush of images and ideas for an ADD audience (aka the videogame generation) and only occasionally does it become overwhelming. The story mode is surprisingly robust, but not overwhelmingly long (which would be a mistake in this kind of game). Finish it up and there’s still plenty of replay value in repeat stages and a free roam mode that allows you to explore all of the city’s nooks and crannies and the mini-games therein. The whole project is very clearly a labor of love and if you’re just as intoxicated with the playable encyclopedia, gaming history, and 80s/90s pop culture as the designers, it’s damn near impossible not to be charmed by what’s on display.

That doesn’t mean that the game is perfect, of course. It is pretty limited and repetitive, with no real appeal to any fresh-faced gamer who hasn’t spent 100s of hours with a controller in their hand. Unlike Super Meat Boy or Bit.Trip, Retro City Rampage never transcends nostalgia to become an exciting gaming experience in its own right. Basically this thing is one big downloadable in-joke that you’ll either find amusing or not with no middle ground. Obviously, I enjoyed the smorgasbord of forgotten childhood relics and chances are anyone reading a review on a gaming site will as well (I’m talkin’ bout you, Willis!), but there will be plenty of people out there that haaaaaaate it for everything us longtime indoor kids adore. You probably figured out which group you fall into shortly after hearing the concept. The good news is that the game lives up to that concept, so go ahead and buy it or run away in fear already!