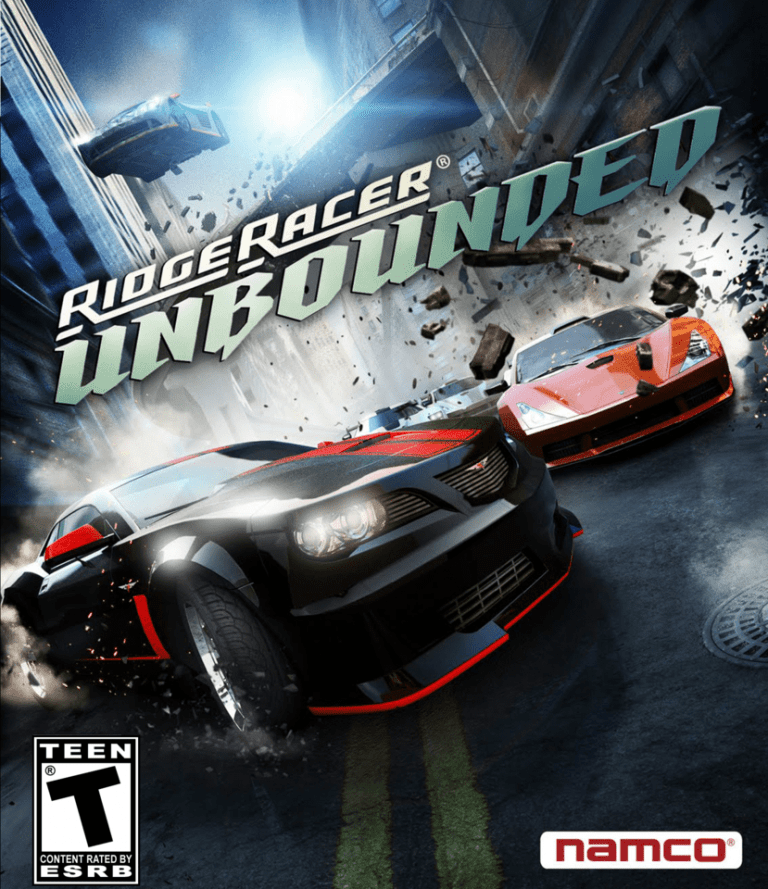 Whither Goest Thou, Reiko?

Once again, there is racing going on, though with a noticeable lack of ridges (at least in the beginning) and the conspicuous absence of everyone’s favorite vacuous yet pretty girl-mascot, Reiko Nagase. Still, Namco is calling this a Ridge Racer game, despite the fact that it’s not even developed in-house anymore, but instead created by the Finnish studio, Bugbear Entertainment. What do you get when you take an established racing IP known for its unrealistic drifting and give it to Finnish people who are best known for their penchant to create races where stuff gets wrecked? You get an interesting new game that probably deserves to have its own IP.

The Ridges Got Tagged

This is not the Ridge Racer you remember. Nothing about this is a sequel in the traditional sense. When Namco handed the reins of the franchise over to Bugbear, those crazy Fins looked at everything the series represented and kicked in the nitro before sending it colliding through a wall at 160 KPH. This is not about optimistic, friendly faced corporations engaging in a bit of spirited competition with slick cars. Now, “The Unbounded” are making their stand against The Generic Man, by showing their displeasure through racing. Which also means knocking things—and each other—to pieces.

This newer, angrier, “Apple doesn’t have an iPad in my color and therefore the entire world must burn” sense of consumer rebellion also comes with a new chassis for the look and sound of the game. Past iterations of the RR franchise have always been slick, clean, and carried the vibe that you were probably going be to slinging back martinis in a hip club after the race was over. This has been replaced with a more down, dirty, gritty aesthetic. The game opens in a badly deteriorated downtown core with a much greater emphasis on urban decay than the series has ever seen. This look is complemented by more of the “environment as HUD” concept that was pioneered by recent games like Splinter Cell: Conviction. The frame rate is generally stable, though not rising up into the 50-60 fps range of titles like Wipeout HD, but considering the amount of environmental destruction occurring on screen, that’s probably too much to ask. The music has also changed directions somewhat, going less for the suave, acid jazz feel of past games for something more aggressive. Dubstep once again rears its head with Skrillex contributing a track, and acts like Crystal Method and Noisia also make appearances. This is also, for the first time in the series history, a game that makes use of the sub-woofer for explosions, as environmental destruction and collision warfare are part of the Road Rage tactics. In many ways, the audio is the biggest departure from the more urbane sophistication of past titles to something raw and combative.

Once you actually sit down and start to play this game, it becomes obvious that this is not Ridge Racer. It’s a good game actually, with a lot of substance and fun going for it, but it has about as much to do with Ridge Racer as Silent Hill 4: The Room did with its predecessors. In other words, fans who wanted more of the same should stay far, far away from this game. Anger and feelings of betrayal will be the inevitable from that particular crowd. The single biggest, most noticeable change is the addition of environmental destruction and vehicular combat. Tracks are no longer static things with guardrails that hem you in no matter how fast you hit them. Walls can be broken, cars can destroyed by high speed impact (only to respawn seconds later, having lost precious time to competitors, much like going off the tracks in Wipeout). All of this is thanks to the Nitro gauge, which still builds up as you drift, but now also charges when you crash or drift into competitors or simply break things on the track. When the gauge is filled, drivers have the option to kick it into high gear to take out or “Frag” racers ahead of them through a turbo-charged collision, or wait until special obstacles approach (a huge gas tanker truck conveniently parked at the side of the road, or an unsuspecting grocery store) when the point of interest is suddenly highlighted, and hitting the nitro causes the car to just drive right through it. In the case of environmental POIs, this creates new shortcuts in the track, but for those gas tanker trucks, it creates an explosion that automatically frags anyone too close. The game will cut to a slow motion cut scene that pulls you out of the gameplay to revel in the destruction you have just wreaked, with enemy cars getting totaled, walls being crushed and things blowing up. This is skippable, but it can still be disorienting once you snap back into the car and try to figure out exactly where you are and what the situation is now.

In this way, Bugbear has completely departed from the pure drift n’ race mechanics of the series to create something faster, more aggressive and more strategic. Considering their past work with the Flatout series, this isn’t really much of a surprise. You can still win races purely by driving a good, clean, technically accomplished lap with tight corners and intelligent maneuvering. But now you can also create shortcuts and systematically wipe out opposition to sleaze your way to victory. This new emphasis on destruction has also called for a revamp of the physics. Past RR games relied on an almost “semi-automatic” form of drifting, a ridiculously simple, yet elegant math formula that resulted in the famous unrealistic drifts the series was known for. Bugbear has thrown that out in favor of a new, heavier, more realistic driving physics system guaranteed to wreak havoc with veterans of the series. In a way, newbies stand a greater chance of initially mastering the driving mechanics of Ridge Racer Unbounded since they won’t have years of reflexes to unlearn.

The races cover multiple environments, and multiple events. Seedy ghettos eventually give way to harbor areas and finally the towering glass and steel of a downtown financial district as the Unbounded “fight for the people” by destroying their homes and small businesses, leaving them destitute and even more at the mercy of uncaring corporations. Obviously someone at the head of this group needs to apply some long term thinking to the current manifesto, but in the meantime, it means you get to wreck a LOT of public and private property while tearing around corners. The events themselves run the usual gamut of racing for pole position, time trials and drifting events. None of these things are easy cakewalks, even at the start of the game.

This is one of Unbounded’s problems. There’s an assumption on Bugbear’s part that you’ve probably played other driving games like Need for Speed or Split/Second and from the start, the tracks and opposing racers are set at a fairly respectable level of skill. It’s possible for newbies to this game to lose their first race several times. This isn’t helped by the fact that the tutorial explains little and, bafflingly, doesn’t explain the new drifting mechanic, leaving the uninitiated to muddle through a new physics system for themselves to get a feel for the nuances of it. Veterans of the recent crop of western racing games will have a small curve of adjustment to get into the groove of things. Staunch Ridge Racer only fans will be at a loss for quite a while. The overall physics are solid, if a bit temperamental, which can lend an air of unpredictability to the maneuvering during races when it comes time to go in for the hard turns. It also makes the drifting events far riskier situations than they were probably intended to be.

On the flipside, in a first for the series, Unbounded has gone kind’a, sort’a ModNation Racers and included a track construction system that allows you to create and submit your own race courses online, as well as play those created by others. One unfortunate side effect of this is it almost feels like Bugbear restricted their own developers to using these assets, so you’ll be seeing a lot of repeating landmarks within the campaign itself, as well as when you start constructing your own tracks. Like ModNation or LittleBigPlanet there’s not a whole lot of quality control going on, so expect to sift a lot through the courses to separate the poorly constructed tracks from the ones with genuinely good design. As to be expected, there’s also a learning curve attached to the track construction, but it’s not helped by a twitchy camera and some unintuitive systems.
Finally, we get to the multiplayer, which is a bit different, because it relies heavily on the track creation system. You can create your tracks, race them to prove that they can actually be won, and then put them online, automatically setting your times to be the ones to beat for people that browse the track collections. Conversely, you can do the same thing, going over other tracks and racing against others to see how you all stack up against the creator. As you’d expect from a racer oriented around destruction, once humans get into the mix, things quickly descend into sadistic chaos, which can be a good or bad thing depending on where your preferences lie.

In the end, what we have with Ridge Racer Unbounded, is a game that really should have just been called Unbounded: The Racing Game. It has nothing to do with its predecessors and doesn’t even really acknowledge any sense of relation or gratitude to the Japanese designed games of the past. If you can get past that, what you have is a fast paced, destruction based racer squarely aimed at skilled, virtual drivers with a flair for creativity in track design. The physics are heavier, touchier and more realistic, and the racing is like the movies of the same name, fast and furious.  It’s fun. It’s actually a lot of fun. It’s just not Ridge Racer.

In the end, what we have with Ridge Racer Unbounded, is a game that really should have just been called Unbounded: The Racing Game. It has nothing to do with its predecessors and doesn’t even really acknowledge any sense of relation or gratitude to the Japanese designed games of the past.
REVIEW SCORE
8
File Under: