Disclaimer: Out of all the PSVR titles, RIGS is the only one that gave me significant motion sickness with extended play. Because this is a subjective experience, I tried to not let it affect my rating of the game too much.

The concept behind RIGS: Mechanized Combat League enticed me from the get-go, and to an extent, it still does. Using VR to pilot a giant robot is a radical idea, and I hope that more developers get on it pronto. There’s something about the sensation of being in the cockpit of a giant mech that just feels right – the ability to live out all of my silly anime fanboy fantasies is finally within reach. Yet at the end of the day, Guerilla’s VR debut only gave me a taste of what could be, before bogging me down with repetition and gameplay that left me wanting.

In RIGS: Mechanized Combat League, players take on the role of a RIG pilot, which in the far-flung future is the equivalent of a sports superstar. The game goes the whole nine yards, too, including corporate sponsorships, advertising deals, and all the trimmings that come with that style of life. RIGS compete in three types of tournaments, all of which are wildly popular spectator sports. One is a traditional sort of death match, while the others are extremely fast and loose takes on football and basketball. You’ll take your pilot and team to victory or drag them to crushing defeat over the course of a season, unlocking new RIGS and sponsorship deals. 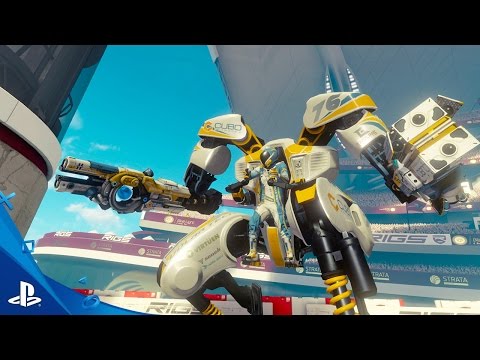 That’s kind of it, really. Once you finish a season, you go through another one and that’s about all there is to it. You’ll unlock some stuff along the way, play the same modes on the same maps, and eventually get bored by the game’s repetitiveness. Well, maybe that was just me, because after a while tedium started to set in with the single player mode. As in, I stopped seeing a point in playing alone, and for anyone else who plans on having a compelling solo experience with this, you might want to think twice.

However, RIGS: Mechanized Combat League’s multiplayer is pretty solid stuff, and obviously the main draw of the package. Note I said “solid,” because once you strip away the VR gimmick, what you’ve ultimately got is a pretty vanilla arena shooter with a neat little mini-game tacked on. Because Team Fortress 2 and Overwatch are things, of course, there are different roles players can pick that affect gameplay to an extent. Still, aside from not being able to access some tighter areas as a larger robot, most of it feels very same-y. Plus, the football mode didn’t really hook me, feeling like a weird compromise between two genres that don’t go great together. I appreciate the creativity that went into it, but it ultimately left me wanting more Team Takedown or Power Slam (the TDM and basketball modes, respectively.)

My primary issue with RIGS, from a multiplayer and gameplay perspective, is two-fold. Firstly, there’s already a giant multiplayer game in the same vein as this – Rocket League. While I’m not a big fan of that title, there’s no denying that it’s basically cornered the market on “silly future sports played in unconventional ways,” and honestly does so in a more interesting way.

Secondly, if I’m going to play a multiplayer shooter, why would I play RIGS? There are only four or five maps, the gameplay’s pretty standard, and the cost of entry is absurd. On the PS4 alone, there are so many great FPS titles to choose from, and with more content to boot. Why would I buy a whole headset to play a watered-down riff on the genre, when I could spent far less to get a more fulfilling alternative? Furthermore, EVE: Valkyrie exists, and frankly, that’s a better VR multiplayer title based on the simple virtue that it’s incomparable to anything else on the PS4 at the moment.

None of this is to say that RIGS: Mechanized Combat League is a bad game, of course. The central gimmick is neat, the gameplay’s solid, and it offers a visually arresting multiplayer experience. Yet the lack of content holds it back, the cost of entry for a game of its sort is too high, and there’s better multiplayer to be found on the PSVR at this point. At a lower price point, and if the servers are still active in the coming months, it might be good for a short while. But at that point, there might be other, more substantial experiences on the platform worth your time.

In fact, there already are.

RIGS: Mechanized Combat League offers some of the only multiplayer available at the PSVR launch, but the shallow gameplay and lack of substantial content make it a tough sell at full sticker price.
REVIEW SCORE
7
File Under: Sony, Virtual Reality