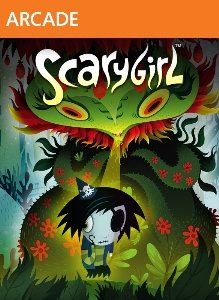 Scarygirl’s Not So Scary Game

Nathan Jurevicius is the Australian transplant to Canada responsible for the Scarygirl graphic novel and vinyl toy series. Now the cult IP has made the jump from a humble, free flash game to a downloadable title on the PSN, XBL and PC. The short version of this review is, buy it if you’re a hardcore, old school platform gamer that also happens to be a fan of Jurevicius’ work. For everyone else, this might not be a game you want to invest in.

Scarygirl is 2.5D platformer in the same vein as older 3D titles like Klonoa, or, in more recent times, LittleBigPlanet. The story is about Scarygirl herself making a journey to Bad City to find out why the Tree of Knowledge is in peril. It’s fairly light on actual plot, being more of an excuse to show off the various Scarygirl characters and create a varied assortment of terrain and levels. The platforming here is standard fare in the realm of Capcom standbys like Ghosts n’ Goblins in that Scarygirl has some offensive capabilities with an RPG lite element of collecting gems in order to purchase ability upgrades. The levels themselves do a competent job providing some platforming challenges and alternative paths, but don’t really reach the levels of innovation seen in major platformers of this generation like LittleBigPlanet or the recent Rayman: Origins.There are a total of seven chapters, each one broken into three smaller sections, and for the dedicated gamer, Scarygirl can be completed in a day or two of play. But that, unfortunately, is assuming that said player has a tolerance for some serious design flaws.

The game’s biggest let down is the shoddy controls. The levels themselves seem to have been designed with some precision in mind, but this runs counter to the floaty physics of Scarygirl herself—again similar in clumsiness to LittleBigPlanet except that game is designed from the ground up to take that floatiness into account. Scarygirl’s loose controls mean that jumping is unpredictable, and her large hit-box creates many awkward moments where the player looks like a particular obstacle or strike has been cleanly dodged, but it still registers as a hit. Scarygirl’s various animations also tend to trap her in combat situations against enemies where a hit, once committed to, can lead to vulnerability as the faster striking opponents can get a hit in while Scarygirl’s own attack animation is playing out.

The game seems to be made for one very specific audience. While fans of artistry will likely appreciate the original art direction of the game, the game itself is also prone to wildly uneven difficulty spikes. Boss fights in particular go very old school, with classic pattern recognition and precise timing, right down to getting familiar with the frames of animation in order to succeed. There’s an assumption the game makes that Scarygirl fans have probably played a lot of classic Nintendo side-scrolling platformers, but it remains to be seen whether Scarygirl fans are really that hardcore. While recent platformers like Rayman: Origins have also garnered reputations for being “old school hard,” that difficulty comes from the fiendish level design, not from a reliance on the clunkiness of the controls making things hard for the player.

Scarygirl is a flawed platformer, but for fans of Nathan Jurevicius, probably well worth checking out to see his art in movement. For everyone else, it is an uneven platformer with poorly designed controls that tend to make matters more complicated than they need to be. If you’re desperate for a new platformer to play, you could definitely do worse, but on the other hand, there’s the fantastic Rayman: Origins available if you really want to see how a well conceived, but difficult platformer is done right.

Scarygirl is a flawed platformer, but for fans of Nathan Jurevicius, probably well worth checking out to see his art in movement. For everyone else, it is an uneven platformer with poorly designed controls that tend to make matters more complicated than they need to be.
REVIEW SCORE
6
File Under: Action, Adventure, Arcade, PlayStation