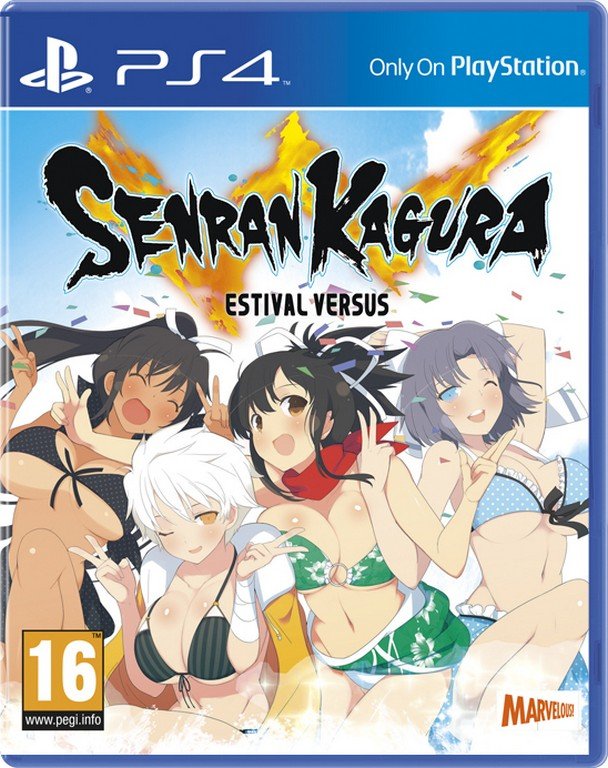 I knew what I was getting into when I was asked to review Marvelous’ Senran Kagura Estival Versus—sort of. I knew the series is essentially fap fuel, and I knew this particular game plays like Dynasty Warriors, so I expected this review to bother a lot of people. All I really had to go off of was my general knowledge of the series, and the trailers showing simple gameplay where you literally hit the clothes off women. Part of me didn’t believe this game actually exists, but I had to see it with my own eyes. And I’m really glad I did. While it’s nowhere near incredible in any sense, I had a lot of fun with this title, despite its obvious objectification of its all-female cast.

I don’t want to sound like a social justice warrior or anything like that, but I have a hard time investing in a story, a game, or any media when the characters are nothing more than a deposit in the spank bank. It makes it hard to really connect with anyone. This is a huge problem in Senran Kagura Estival because they’re not real. They’re real in this world that’s created, but it’s hard to feel any attachment. And even then, you probably won’t. Despite that, there is a story, and as much as I hate to admit it, it’s kind of entertaining. The game starts when two large-breasted girls go to a forest to pray. But when one girl bends over to have her friend smack her ass, they discover an old woman performing an ancient ritual. As they look on they see the spirit of one of the girl’s dead sister as she’s being sent to another realm. They try to run to stop it, but end up going with her. They end up on a beach because why not? This starts a sequence of events where a bunch of girls keep ending up on this beach. It’s a good thing they get there, because it’s a time for celebration! The locals there are preparing to ease the spirits of fallen shinobi to their final resting places and they need the help of this ragtag group of busty, barely legal high-schoolers.

How can they help, you ask? To be honest, I can’t say. But it involves beating the clothes off of waves of ninjas (literally). Also our sexy warriors take their clothes off for some reason. There’re a lot of half-naked women. The story I made in my head is so they can move better. And they need to, because there is a really deep combat system in place. It is very Koei Tecmo inspired, but it feels a little more refined. Hordes of enemies attack, and you mix light, powerful, ranged, and area attacks with wall running and bomb throwing to make the best combo imaginable. Each character has her own special berserker-type mode where she changes attire, takes less damage, and uses stronger attacks. But there are a few problems with this style of game. The first is there are 34 characters. While they do play kind of differently, they don’t vary enough to ever change your strategy. On top of that, the Dynasty Warriors-style gameplay can get boring if you play for too long. I feel like this type of game would be better suited for the Vita.

But I wouldn’t recommend playing this game outside of your home. Every cutscene feels like an excuse to show some boobs and booty. Also throw in some are really groan-worthy (but sometimes unintentionally hilarious) dialogue scenes whose only purpose is to try to turn you on.  These dialogue gems had some great lines like “just let me grab your boobs!” and “call me a bitch.”  There was one interaction when one girl offered to give another a shoulder rub very slowly “up….and down…” she offered. It was weird.

But I question its staying power. Yes, I enjoyed it more than I anticipated, but between the time I got the game and started writing this review, I didn’t overexpose myself to the game. I don’t think the combat will ever be an issue, but the novelty of the scantily-clad-pseudo-lesbian-large-breasted-ninja–boob-fighter can get old eventually. That’s sort of the nature of the beast, but it’s also the hook.

It is what it is, really, and I wish I hated this game a little more. But for whatever reason I found it kind of fun in short bursts, which makes this sort of a mixed bag for me. On one hand I had a lot of fun, but on the other, there are some serious questions about the sexual objectification of the characters, and where the line is drawn between fun and overkill. To that extent, I don’t think this game has much staying power, and if you’re into this series, you’ll love this game. But if you’re unfamiliar with Senran Kagura Estival you should be warned. If you’re not a fan of over-sexualisation, and character arcs as deep as a Five Seconds of Summer song, maybe you should pass on this. But if you’ve seen the trailer and are even slightly interested, I’d say give it a shot; there is a lot of fun to be had.

On one hand I had a lot of fun, but on the other, there are some serious questions about the sexual objectification of the characters, and where the line is drawn between fun and overkill.
REVIEW SCORE
7
File Under: Dynasty Warriors, PlayStation