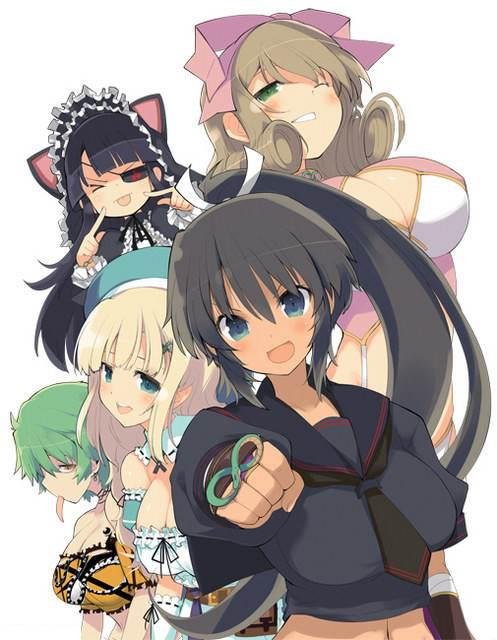 Fan-service alone can’t hold up a game. While it can draw a specific demographic (male, mostly), there needs to be something more than just visual appeal. Gameplay is king; a truth occasionally forgotten in today’s interactive entertainment. Senran Kagura Burst is at times, fun, frantic, and enjoyable. But its repetitiveness takes a toll, and the amount of fan service not only made me feel uncomfortable, it exposed the game’s wasted potential.

So what is Senran Kagura Burst? To put it simply, a game about adolescent, female ninjas in high school with abnormally large chests. The gameplay switches between a Dynasty Warriors style beat-em-up, and a visual novel. While the story is cliche, it provides loads of voice acting and is sure to please most anime fans. It’s also neat that the story is told from two perspectives: the good ninjas, and, sure enough, the bad ninjas. Most of the characters were complete stereotypes, but they were still enjoyable at times.

As for the fighting gameplay, it has a lot of problems. Framerate dips are constant and noticeable, bringing the game to single digits at times. There aren’t many different enemies, allowing the same combos to go over and over. Toss em up in the air, keep juggling, and kill; all with a few presses of a button. But here’s the thing: I still enjoyed it. Just like the Dragon Ball Z fighting games, the repetition was comforting rather than frustrating. There is something rewarding and satisfying about beating the crap out of 5 people in the air at once. All this isn’t without a prize either. As you complete missions, you unlock things like costumes, photos, sounds, stories, etc. Not to mention each character has a different fighting style; as well as their own special move (some use swords, some slap, some use kicks, etc.).

You may be wondering, where does the fan service fit in? Well…everywhere. Taking damage in battle causes you to lose clothing. You can enter a frantic mode at the beginning of each stage which leaves you in nothing but a bikini. There is a deep dressing mode that allows you to change all their outfits (and let us not forget, zoom in and out of every area you so choose). Many scenes in the story occur in showers. There is one scene where a certain-shaped food is eaten in a strange way. And finally, there is a character that actively gropes the other girls, squeezing their breasts in almost every chapter. (Also of note is that the 3D effects focus strongly on the breasts and I’m sad to say, they are probably the most detailed 3D effects I’ve ever seen on the handheld. It’s too bad that it was used for such a trivial purpose.)

Yep. there is a lot. And while some of it was manageable, I found myself uncomfortable during much of the title. See, fan service should never take precedence over the gameplay. Once it does, the game loses focus and loses its quality (ie. the framerate quality). Senran Kagura Burst is an example of a game that could easily be something more. The Dynasty Warriors style play was enjoyable and was welcomed on the handheld, but the technical issues and lack of enemy variety make it hard for many to stay interested. It’s not hard to understand: many buy it for the fan-service. Heck, by some standards, there are much worse games sexually. But the main issue is that the actual-game-part-of-the-game suffers dramatically. And on a personal note, it’s insulting to an industry that is trying to move in a mature direction. On the flip side, if you’re looking for a long game that has some standard anime qualities and many collectibles, this is a perfect way to waste your day in the oncoming drought of big releases. Just remember, you can get it online for free fellas!

Senran Kagura Burst is at times, fun, frantic, and enjoyable. But its repetitiveness takes a toll, and the amount of fan service not only made me feel uncomfortable, it exposed the game's wasted potential.
REVIEW SCORE
5
File Under: Dynasty Warriors