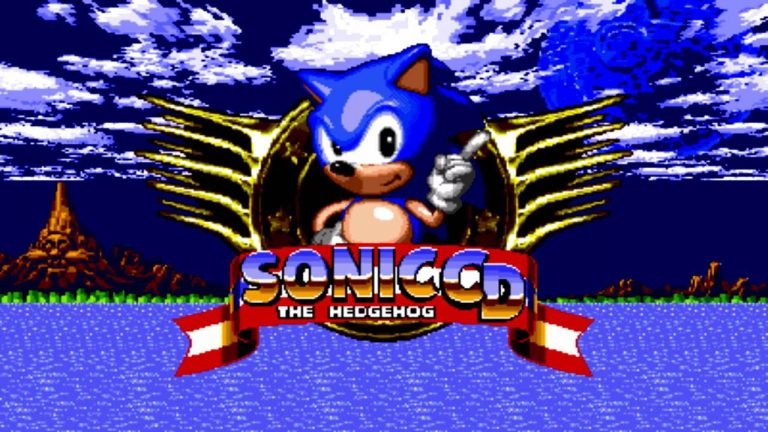 Growing up I never had a Sega Genesis of my own, so my experiences with Sonic the Hedgehog were gained from those times I spent at friends’ houses playing their system. The Sonic games were fun and fast-paced, simple-looking but deceptively complex. Up until a few weeks ago, I didn’t even know that this game, Sonic the Hedgehog CD (shortened to Sonic CD) had even existed. It’s not hard to reason out why, given that itw as originally released in 1993 for use with the CD peripheral add-on for the Sega Genesis, something that I personally don’t ever remember anyone I knew actually having. As I read up on the history of the game, I started to get really excited about playing the game, as it added new elements to the Sonic mythos, which would be used again when Sonic the Hedgehod 4 Episode I was released.

This game isn’t simply a port of the original, however, and that’s part of the appeal of picking this game up and giving it a spin. It’s been rebuilt from the ground up, it’s ostensibly the same game, but it’s been tinkered with considerably more than you’d see in a simple port. The game was developed from scratch, utilizing an engine called the “Retro Engine”, a creation of independent developed Christian Whitehead. By using this engine, the game was thus made open to improvements that could be implemented, with one of the biggest changes being that widescreen graphics were enabled, and physics that weren’t previously in the game could be added. Additionally, players can unlock Tails as a playable character.

The plot, for lack of a better word, will be familiar to fans of the franchise, as Sonic must go up against the evil Dr. Robotnik, who this time has put together time machines to ruin the past. So Sonic can go back and forth between the past and the future, while battling his enemy and saving his innocent victims. The game features the first appearance of Metal Sonic, who would later get expanded screentime in future Sonic games, eventually even becoming a final boss and a playable character (although obviously not in the same game).

Visually, this game is something special, given its age, as the game is eighteen years old, yet looks much better than that thanks to the Retro Engine. The ability to play the game in widescreen is much appreciated, as prior rereleases of Sonic the Hedgehog 1, 2 and 3 were presented in their original formats, eschewing current widescreen preferences. The graphics are crisper and cleaner than those seen in the original trilogy of Sonic games for the Sega Genesis, and there’s much more going on visually in each screenshot. However, this is both good and bad, because at times the game is very busy-looking, with so much going on, even though some of the elements that are on the screen aren’t actual obstacles, etc. The level designs are far more complex than in prior games in the franchise, which is both a boon and a detriment at the same time. Part of what made the original games so popular was the whole aspect of the game looking simple, but being far more complex than that, and thereby more challenging and enjoyable. With this game, however, the game at times looks very complex, and actually ends up being so. The level design is nowhere near as simple as in previous games, and your enjoyment of the new levels is going to be somewhat affected by how you enjoy the more complex level design. Whereas prior games were very straightforward in their approach, in this game there are multiple routes through each level, with the route not always being as purposeful in prior games, as there are tons of springs, etc that will bounce up and over where you may have thought you’d be going. As you get farther in the game, the gameplay can be a bit frustrating as new elements are introduced, which hamper your overall movement and make the game less about Sonic simply racing through a level. Suddenly the ground itself is buzzing with energy, and if you are on it, you are propelled upwards, and onto other moving platforms which don’t have the same kick to them. The boss battles against Dr. Robotnik are a nice touch in this game, because they aren’t simply the same as they’ve been before in past games in the franchise. In one level, instead of actually hitting Robotnik, you just want to hit all of the bubbles that surround him (underwater, naturally), and in another you don’t hit him at all, but instead run as fast as you can on a conveyor belt, as it slowly melts the bottom of the apparatus that he stands in, until he falls out, and then runs away into the next level. Plus there’s the added bonus of having the time warps that can bring you to the past, future and back, and add a whole new dimension to the gameplay. As I said, it makes the game more complex, and although I don’t think it was necessarily needed, it does make the game a slightly fuller experience.

The difficulty level can vary on if you’re trying to beat the game, or if you’re trying to beat the game, unlock all achievements/trophies, and collect all of the Time Stones. If you’re concerned with the former, the game presents the typical challenges inherent in a Sonic the Hedgehog game, but is an enjoyable platformer with a fair level of difficulty. However, if you’re hoping to do the latter, the game presents far more challenges, and will take much longer to complete to that extent. Either way, the game is a great new release, an enjoyable romp with Sonic, presented in all its beautiful, widescreen glory.

Visually, this game is something special, given its age, as the game is eighteen years old, yet looks much better than that thanks to the Retro Engine.
REVIEW SCORE
8
File Under: Arcade, Microsoft, Sega, Sonic the Hedgehog, Xbox