No Phoenix, But All The Wright Pieces 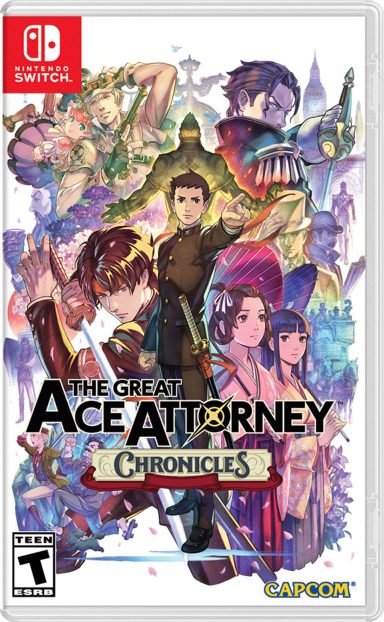 Set in the Meiji era of Japan, The Great Ace Attorney Chronicles takes place long before the time of Phoenix Wright, as you aid his ancestor, Ryunosuke Naruhodo, in solving cases from a time period where Western forms of law were just becoming commonplace in this time period of Japan. While also finding time in Great Britain, this title increases the historical load tenfold from previous iterations of the Ace Attorney series. While taking inspiration from mechanics found in Professor Layton vs. Phoenix Wright: Ace Attorney and offering a more stand-alone experience due to its distance from the series in terms of timeline placement, The Great Ace Attorney Chronicles sticks to its roots to offer exemplary gameplay and thought experiences regardless of how wacky they may be at times.

You are Ryunosuke Naruhodo, second-year student at the Imperial Yumei University, and you’ve been accused of killing a British professor. Throughout the first trial you are quickly thrown into, you find yourself tossed to the wolves and must quickly learn the intricacies of law in order to keep yourself from prison time. Along with the help of some friends and cohorts along the way, you travel to Great Britain to learn even more about your craft while solving many cases along the way. Thick with historical context and complex storytelling, The Great Ace Attorney Chronicles demands your attention, while perhaps at times expecting a little bit more knowledge of the era than most players will have sitting in the back of their minds. While this doesn’t ruin the experience by any means, it makes understanding some of the racist and sexist remarks and references to the era a bit more hard-edged than what you might find from previous Ace Attorney games, but the accuracy to the period deserves to be applauded regardless.

Much like every Ace Attorney game until this point, the gameplay loop consists of narrative implications that direct you to a crime, followed by a period of investigation where you collect evidence and learn about the case from bystanders, followed by a trial where you must pick apart the testimonies of those accused, as well as the witnesses, in order to dissect what really happened to arrive at a proper outcome. This is the portion of the game that fascinates and gets your mind really working, as you progress through each of the two games in this collection (The Great Ace Attorney: Adventures and The Great Ace Attorney 2: Resolve). Progressively more complex as you make your way through each of the ten cases on offer, this puzzle-esque adventure expects sharp wits and your full attention.

Scouring locations for clues is always where a lot of time and effort come into play, as missing out on valuable pieces to the puzzle can result in mixed results later on. Utilizing a point-and-click format, you’re basically just looking around and seeing what looks out of place, which gets more difficult as things are better hidden later on. Additionally, things transition quickly when entering the courtroom, as that meticulous nature transforms into making sure you’ve got your ears perked up in order to catch characters speaking out against what you have discovered to be true from your investigation.

Different from some of the original games in the series, The Great Ace Attorney Chronicles pulls from Professor Layton vs. Phoenix Wright: Ace Attorney in the format of the trial, where all the witnesses and possible offenders sit on trial all at once, meaning you’ll have to focus a bit more as the dialogue bounces around the room more than what you might be used to from the mainline series of titles. Regardless, if you’re somebody who has found this series of titles to be ones you enjoy, then you’ll find yourself having just as incredible of a time over the 50+ hours available in this collection.

Looking fantastic on the Nintendo Switch, The Great Ace Attorney Chronicles runs smooth and offers visuals that certainly look more like what you’d expect from a console iteration (even though these have mobile roots when they were originally released in Japan a few years ago). Because of this, one could only dream of what a from-the-top-down experience would look like on modern consoles, but regardless, due to the more narrative and small-scale needs in terms of hardware, The Great Ace Attorney Chronicles looks great and plays great all day long.

The Great Ace Attorney Chronicles gives all of the Ace-Attorney goodness you’d be looking for as a fan, while also offering a perfect starting point for those trying to get into the series for the first time. While some of the historical accuracy can be harsh at times and the length of this collection could be daunting for some, if you’re ready to get your Herlock Sholmes hat on and get down to business, then there definitely isn’t a better place to jump in than with this gem.

Although it can be tough at times to jump into an era that you’re unfamiliar with, The Great Ace Attorney Chronicles masterfully offers all the gameplay you’d hope for without leaning on other iterations for story content.
REVIEW SCORE
8.5
Buy On Amazon
File Under: Nintendo Switch