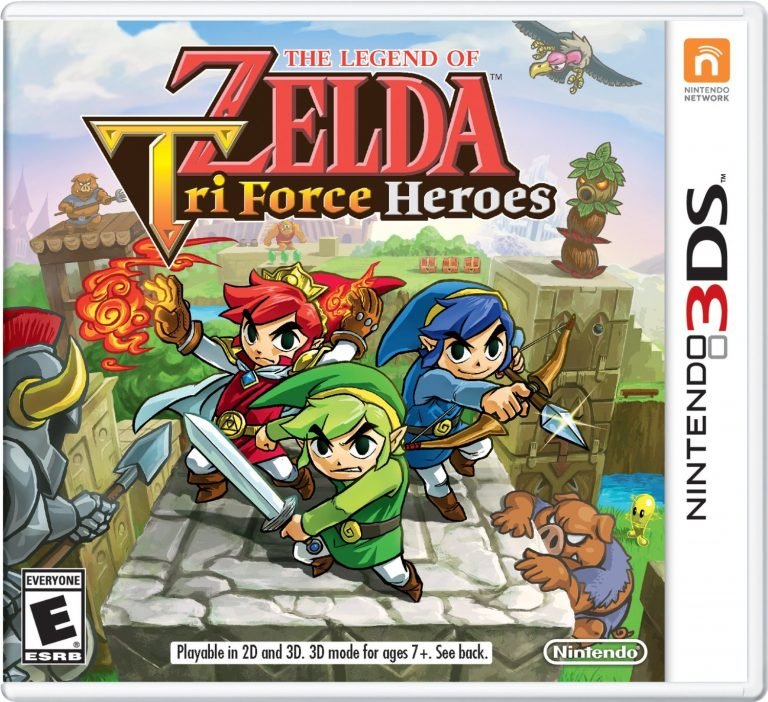 Whenever Nintendo drops a new console onto the world, it’s safe to say that a new Zelda game won’t be far behind. These titles have become Nintendo’s epics and the way that they push the power of their consoles to the limit while still staying mascot-friendly. The only trouble is that a proper Link adventure is such a massive undertaking for Nintendo, that at most they can only only deliver two of them in the lifecycle of any console.

However, Link is a powerhouse player and a major seller, so Nintendo has started devising new and simpler ways to give Nintendo nerds their Link kicks to kill time between major quests. All of which brings us to TriForce Heroes, a strange new co-op 3DS game, offering dudgeon puzzle-solving Zelda kicks in a more bite-sized package. This colourful and downright goofy game is definitely fun, but doesn’t quite pack the punch of a proper Zelda adventure. Of course, you already knew that without even a second of playtime, now didn’t you?

There’s no sense in getting into plot details for TriForce Heroes because there really isn’t one. Essentially, it’s a colourful, goofball collection of mini-dungeons with the occasions scrap of story to link them together that doesn’t matter all that much. The game undeniably looks gorgeous, taking on a top-down perspective (always a dimensional delight on the 3DS) and the blinding primary colours/cartoony designs of the classic Zelda games that created the series. There’s no large map or world to explore this time, though. Instead, it’s a collection of 32 dungeon stages to be played in succession to completion. It’s the equivalent of Zelda-branded mini-games which, keeping with the series, is still going to keep you chugging along for 20+ hours on the initial playthrough.

Each stage is comprised of four sections that must be completed in a single sitting. It’s also going to take three Link avatars working together to get these things done. You’ll pick up other Links and toss ‘em around or combine to form totems to solve all the puzzles. Sometimes each character will have to be on a different plane to pass the latest challenge and other times you’ll be tossing the little guys across gaps that could never be crossed otherwise. As usual, Nintendo’s puzzle system can seem deceptively simple. The puzzles are never too repetitive and often even set up a familiar task as a trick just to get that big brain of yours pumping a little harder. Those folks at Nintendo sure know what they are doing.

The combat style is the usual ‘mash the attack button and hope for the best’ that we’ve all come to love from Zelda games. You won’t have a shield in your hand this time, though. Nope, there will be no blocking, only dodging or switching between characters with different assigned weapons to get those bosses and enemies killed real good. Sounds annoying in theory, but works well in practice. In addition to the familiar Zelda weapons/items, you can also build special suits this time to aid in your quest. By collecting materials and spending rupees between levels, you can build outfits that enhance your powers. For example: there’s a Legendary Dress that will help provide hearts, a Cozy Parka that will stop ice slipping (I’m not sure how a coat does that, but no worries), and a Boomeranger outfit that, shockingly, provides boomerangs. The suits won’t offer new solutions to puzzles, but will help make tricky stages a little easier to complete.

When playing through the 32 stages in single player, you’ll have to swap between the Link and two other playable drones for puzzle solving and boss battling. It works rather well, especially since the stages have specific designs for the single-player experience. In multiplayer, things work slightly differently, since there are three sentient Links bumbling around together in the dungeons. There are two ways to access this co-op play. The first is local, which requires three players with 3DS systems (if you only have one 3DS buddy, you are SOL). The second mode is online, which plays smoothly on a technical level with strangers, but does have one major flaw: communication. There’s no way to speak directly to your online play partners. You can only use a handful of simple emojis with messages like “Over Here” or “Noooo.” That’s fine in certain circumstances, but isn’t exactly an ideal tool when trying to communicate how to solve an intricate, multi-character puzzle. Obviously, that’s not an issue in local multiplayer where human communication is at least theoretically possible, but it can be a pain during online play. Not annoying enough to destroy the game by any sense of the imagination but enough for to be a pain-in the-tuchus from time to time.

Make no mistake; TriForce Heroes is in no way a satisfying and full Zelda experience. Nope, this is a little oddity between major Zelda releases to keep fans happy and needs to be treated as such. Taken on that level, there’s no denying that this thing serves up big heaping piles of fun. The puzzles are fresh, the multi-Link gameplay is clever, and the fan service comes fast and furiously. Despite the limited communication, online multiplayer works quite well by Nintendo’s standards and that should be enough to extend gameplay on this title for quite some time once you’ve powered through the levels for the first time. This is the type of colourful, challenging, and universally enjoyable gaming experience that we’ve come to expect from Nintendo and perfect way to get some Zelda jollies while waiting for Nintendo to finally unleash their Wii U beast for the franchise. Three Links might not necessarily be better than one, but you’ll still fall in love with those little guys over way too many hours of playtime in TriForce Heroes.

There’s no denying that this thing serves up big heaping piles of fun.
REVIEW SCORE
8
File Under: Multiplayer, Nintendo, Zelda